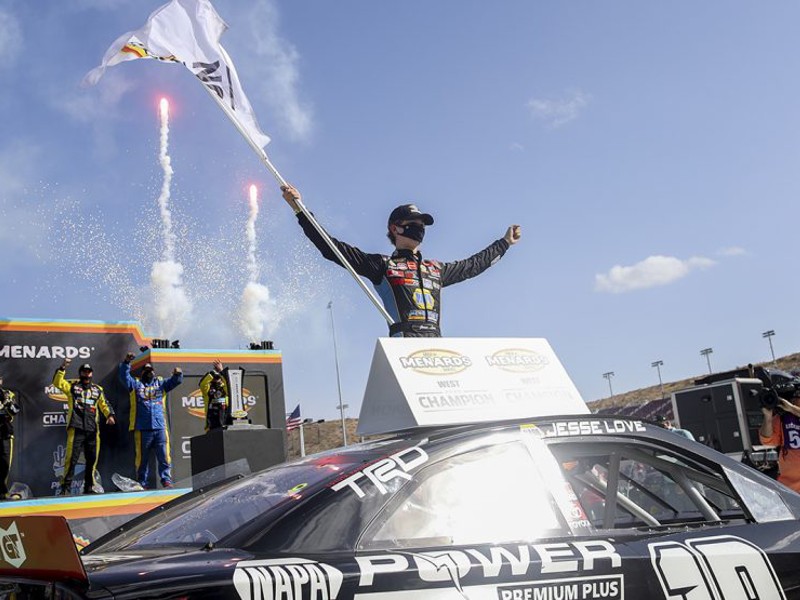 AVONDALE, Ariz. – David Gilliland might not have sought to steal the show Saturday in the ARCA Menards Series West season finale at Phoenix Raceway. The Arizona Lottery 100 was supposed to be all about Jesse Love vs. Blaine Perkins for the championship.

Yet it was the 44-year-old’s pass of Ty Gibbs at the white flag that put an exclamation point on a race that saw engine failure for Perkins prematurely end his hunt for the 2020 title.

Love, who finished a lap down in 14th while Perkins finished 25th, is the youngest West Series champion at 15 years, 9 months and 24 days old. David’s son, Todd Gilliland, previously held the record after winning the West title in 2016 at 16 years, 5 months old.

Love said his goal for the race was to stay out of trouble and preserve what was a 14-point lead over Perkins in the standings. Despite his running in the middle of the pack, he was doing more than enough to clinch the championship when Perkins left the track with engine trouble after 67 laps.

“I just knew when the race started I had to control everything I could control,” said Love. “Kind of put my pride aside and just try to race the nine car and not put myself in any situations. If I could find a gap, I would drive forward to get to that gap, or I would just back off to get to that gap so I could just be by myself and not have to get in any dog fights or anything like that.

“Had to be smart about it. It was killing me. I wish I could have been more aggressive, been able to race really hard. But one of those deals, but obviously it’s cool. Paid off in a championship.”

Perkins needed to finish 12th or better to have a chance to jump Love for the championship, so the DNF for the No. 9 Sunrise Ford/Four Star Fruit/Lucas Oil Ford clinched the title for the No. 19 NAPA Power Premium Plus Toyota.

Gilliland, who co-owns DGR-Crosley, was making his only West start of the season. He took the General Tire Pole award prior to Saturday’s race and battled back from a black flag for jumping a late restart. The victory marked his first under the ARCA Menards banner.

Gilliland prior to the Phoenix race said he was hoping to give DGR-Crosly ARCA Menards regular Taylor Gray and his son David a run for their money. He did more than that, though his teammates were contenders, too. Gray finished third and David Gilliland finished fourth.

“As we’re coaching these kids and coming up through our driver development program, it’s nice to come out and run good,” David Gilliland said with a laugh. “They listen a little bit better.”

Gilliland admitted it felt good to go to victory lane as a driver rather than as a car owner for the first time in the West Series since 2012. But he said the victory was not the best part of his experience at Phoenix.

“It’s always fun racing with Todd, and to be able to race with your son is actually a dream come true for me,” said Gilliland. “(It) tops anything. Tops sitting here in victory lane and winning, winning as an owner or a championship — it tops everything, racing with him.

“And to be able to do that today was very special.”

Gibbs led the most laps Saturday before settling for a second-place finish. Drew Dollar rounded out the top five.