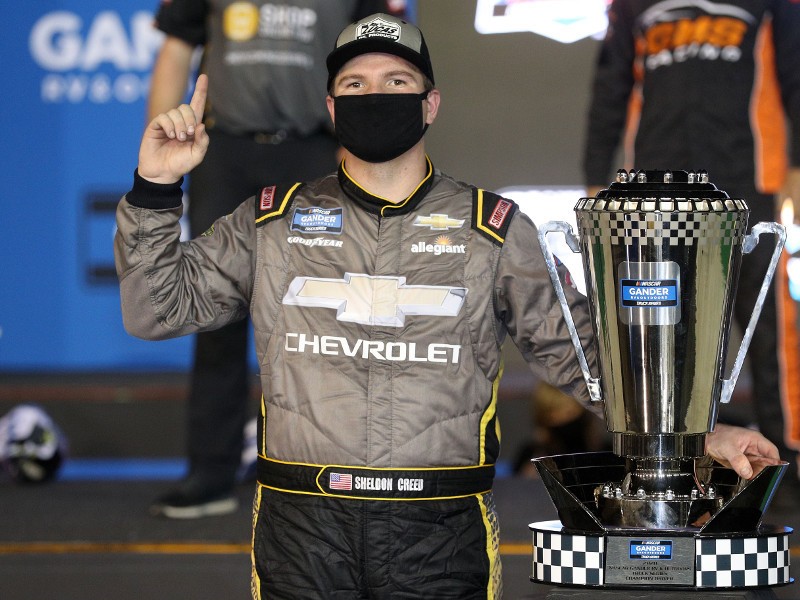 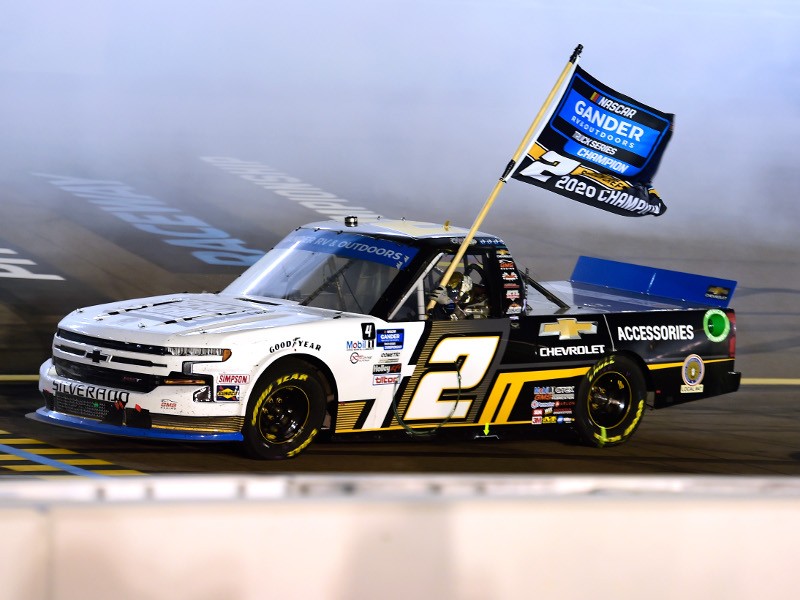 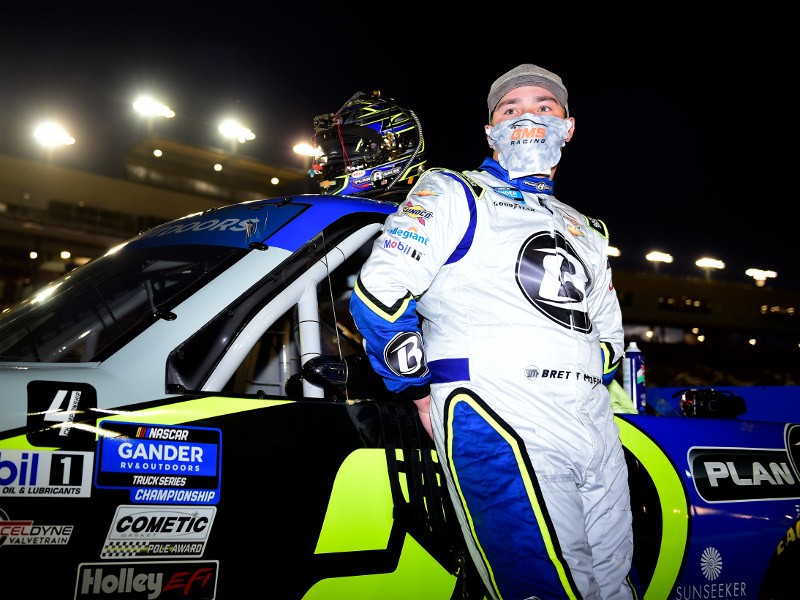 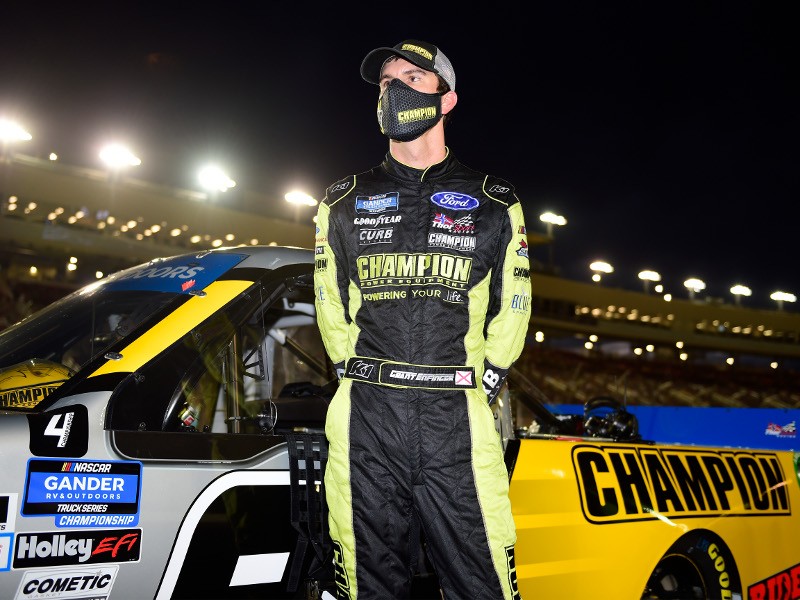 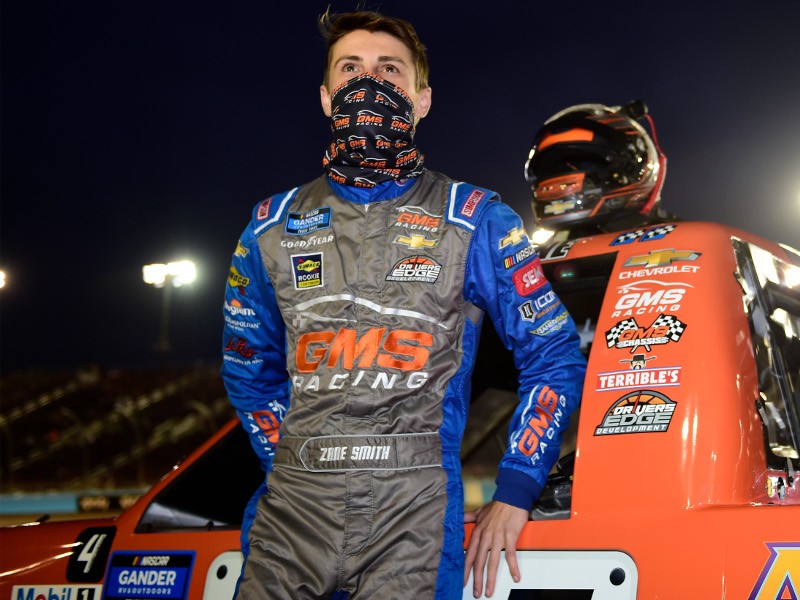 Brett Moffitt was on the cusp of his second NASCAR Gander RV & Outdoors Truck Series championship, leading the Lucas Oil 150 at Phoenix Raceway handily as the laps ticked away – fifteen, ten, five…

But a caution with just three laps to go for a crashing Dawson Cram changed everything, sending the race into overtime and erasing it all.

It would be Moffitt’s GMS Racing teammate Sheldon Creed hoisting the champion’s trophy after the call from crew chief Jeff Stankiewicz to take on tires for the two-lap shootout, and those fresh ties proved to be the difference as the 23-year-old Creed charged by a half-dozen trucks to take the lead, clearing the field with a lap to spare and then watching them recede behind him.

Zane Smith, who also took tires, finished second, wrapping up the runner-up spot in points as well as the series rookie title.

Moffitt, on the oldest tires of the championship contenders, fell back on the restart, finishing 10th but wrapping up a third-place points finish. Grant Enfinger tagged the wall on the final lap, finishing the race in 13th and taking home the fourth-place prize on the season.

It was Creed’s fifth career win and also his fifth win of 2020. It marks his first win at Phoenix Raceway.

Creed says the victory was unexpected until he and his team took the tire gamble on the final caution.

“I thought my teammate was going to run the championship and we were going to run third,” Creed said afterward. “Just a good truck on the short run, way too loose as we went on. Caution came out there and (Stankiewicz and) I were talking and we said we have nothing to lose. Let’s put tires on it. I pride myself on my restarts week in and week out. Just nailed a restart right there. They were racing really hard. (I was) driving this thing as hard as I can. I wanted this thing so bad. I don’t know how I did it. I just drove as hard as I could. I knew if I did that I’d have a shot.”

Zane Smith rolled out to the early lead, dragging Creed along for the ride. Martinsville winner Enfinger dropped to fourth on the start after choosing the outside line from the pole, and he’d have to spend the early laps playing catch-up. Moffitt bided his time and worked his way closer to the leaders as the laps ticked away in stage 1, but couldn’t make the move. Smith won a caution-free stage 1, with Creed, Moffitt, Enfinger and Matt Crafton making up the top five.

Creed started stage 2 from the point as he won the race off pit road, holding off early challenges by Moffitt and Ben Rhodes as Zane Smith fought Rhodes for third and Enfinger lost a couple of spots. It would be Creed’s teammate Moffitt bringing the biggest challenge as the stage wore on, which allowed Smith to close in.

Moffitt took the lead from Creed with 16 laps to go in the stage, setting up the pick as the pair navigated lapped traffic. Zane Smith took advantage as well, getting past Creed and setting sail for Moffitt. Moffit had the truck to beat, though, winning stage 2 over Smith, Creed, Rhodes and Enfinger with no cautions to tighten up the field.

Moffitt rolled out of the pits first to lead the field to green in the final stage. Creed tried to make something happen, but was unable to pass Moffitt as Zane Smith stalked them from third. Enfinger, who had been quiet for the first half, charged through the field, getting by both Smith and swapping second spot with Creed a couple of times before setting his sight squarely on Moffitt. He had the faster truck, but time was on Moffitt’s side as the laps dwindled. Then came Cram’s crash.

“I don’t have much good to say, said a defeated Moffitt as he climbed from his truck. “We finally hit the setup right, and can’t call a race to save our lives. It’s cost us multiple times this year and now it cost us the championship. Unfortunate, but thankful to all my partners who have been with us all season long and to everyone on this team for working hard. It’s frustrating losing like that.”

Enfinger credited his team’s strategy for the late charge that ultimately fell short.

“(Crew chief Jeff) Hensley made a good call to just get off sequence. We just couldn’t go on a short run. We had good speed on a long run, but just couldn’t pass after that. So we got off sequence. That worked. Hensley was leaning towards tires at the end. I was leaning against it just to do something different, and we ended up staying out. That cost us. It just is what it is. We didn’t have quite the short run speed to legitimately contend tonight, but, man, a great season by these guys. I’m gonna try not to be too sad leaving here because it’s been a great year. It’s just unfortunate the way it turned out tonight.

“I was voting to stay out and Hensley was kind of voting to come in and I talked him into staying out and that cost us a shot. Anyway, we’ll try not to hold our head too low leaving here. It’s been a great year. I’m proud of these guys, it just didn’t work out tonight.”

Runner-up Zane Smith expressed disappointment in himself for failing to catch Creed in overtime.

“(I’m) disgusted, honestly. I’m happy for Sheldon. He had an amazing year, along with us. Nothing hurts more than being the first loser. But still, like I said, an amazing year, rookie of the year. Just one spot short.”

Creed’s title is his first in the Truck Series and comes in his second season. He’s also the 2018 ARCA Menards Series champion.