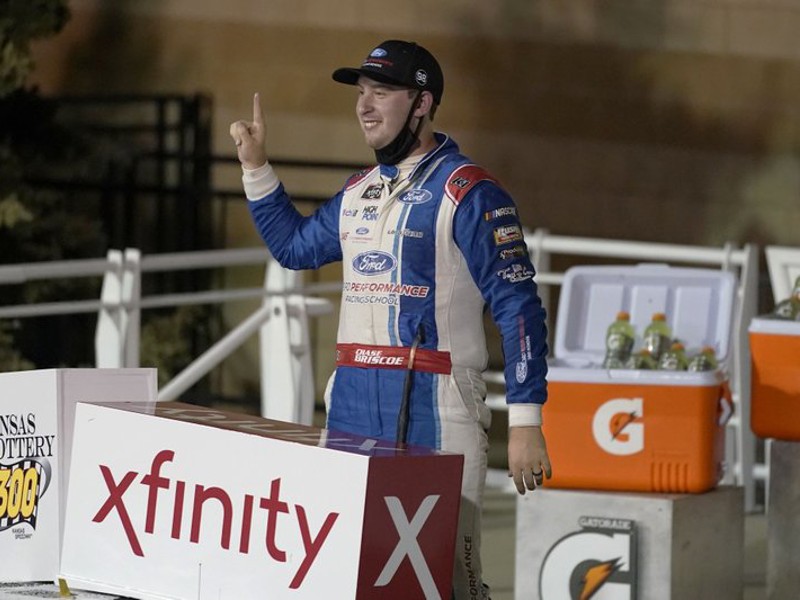 FILE - Chase Briscoe celebrates in victory lane following a NASCAR Xfinity Series auto race at Kansas Speedway in Kansas City, Kan., Saturday, Oct. 17, 2020. Briscoe professionally has had the best season of his career with nine wins, a promotion next year to the Cup Series and the chance to cap it with the Xfinity Series championship. The on-track success in this once-in-a-lifetime season has been the public side of an emotionally heartbreaking personal journey. (AP Photo/Orlin Wagner, File)
Contact Editor

AVONDALE, Ariz. (AP) — Chase Briscoe has enjoyed the best year of his professional career: nine wins, an upcoming promotion to NASCAR's elite Cup Series and the chance to cap it with the Xfinity Series championship.

The once-in-a-lifetime season has been the public side of an emotionally heartbreaking personal journey. Briscoe’s wife, Marissa, has suffered two miscarriages and the second pregnancy ended this past week as Briscoe was preparing to race for the title Saturday at Phoenix Raceway.

“I feel like no matter how high the high is on the racetrack, it never compares to the low,” Briscoe said. “But it does help balance it out a little bit.”

The winner-take-all finale pits Briscoe of Stewart-Haas Racing against Austin Cindric of Team Penske, two Ford drivers who will also face Justin Allgaier of JR Motorsports and Justin Haley of Kaulig Racing, both in Chevrolets.

For the first time since racing stopped in March, drivers can have a small group of family members at the track and Briscoe will at last have a chance to share this surreal season with his wife.

The Briscoes lost their first pregnancy in May while Briscoe was at Darlington Raceway in an Xfinity Series rain delay. Briscoe was on FaceTime with his wife when the couple was given the news. He later won the race.

He hasn't shared much information about their second miscarriage — the couple learned they were expecting the same day Tony Stewart told the couple Briscoe would drive the No. 14 Cup car next year — but Briscoe said doctors may have found "the next thing to try in our path of trying to have a kid.”

Compartmentalizing on Saturday will be no issue, Briscoe said, when he attempts to close the season with his first NASCAR national series championship.

“I feel like I’ve always done a good job at kind of keeping the two separate and, truthfully, it doesn’t motivate me more but just helps me get in the race car and get away and really focus,” Briscoe said. "I feel 100% ready to go this week, no different than any other week.”

The Xfinity Series will crown its first new champion in three seasons after two-time winner Tyler Reddick moved to Cup this year. Of the four title contenders, only Briscoe is moving to Cup next season.

Cindric's promotion with Team Penske has been delayed until 2022, when NASCAR debuts its new car. Haley said he decided to return to Kaulig Racing rather than waste a year in Cup learning a car that will be obsolete the next season. Allgaier will return for a sixth season at JRM.

Cindric was closest in competition to Briscoe this season with five victories, but his last win was 13 races ago in August and it will likely take a victory at Phoenix to win the title.

“I think you have to approach Phoenix as a must-win situation, just because the competitiveness this year has been off the charts," Cindric said. "I don’t think you can underestimate any of your competitors and you have to bring your best foot forward.”

Allgaier, a three-race winner this season, is seeking his first championship. He's finished third three times in his Xfinity Series career and has been in title contention four of the last five times. Allgaier has the most Xfinity Series starts at Phoenix with 20 races and has two victories, including last November.

Haley, in his second full Xfinity season, gives Kaulig Racing its first shot at a series title. Haley excels at superspeedway racing, but notes his fifth-place finish at Phoenix in March was highest of the championship contenders.

“Obviously I feel like I'm the underdog, I always have been,” Haley said. “But we're very capable. Our program has improved quite a bit since (March). I feel like our shot is very good.”