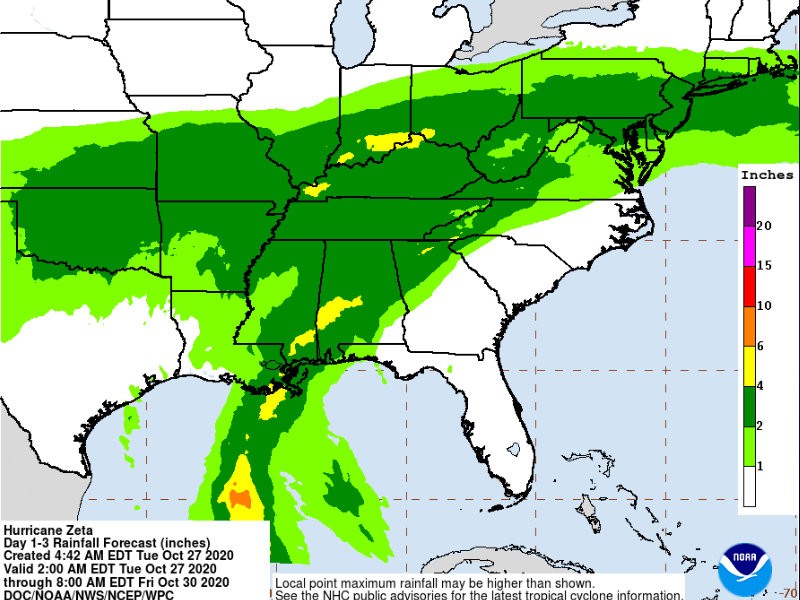 More heavy rain is expected across North Georgia as yet another hurricane hits the Gulf Coast late Wednesday, Oct. 28, according to the National Weather Service.

A Tropical Storm Watch is in effect for much of North Georgia, including Hall County and surrounding areas, through Thursday at 11 a.m. A flash flood watch, which includes the Gainesville area, goes into effect Wednesday morning.

Zeta is predicted to make landfall along the Louisiana coast and affect Georgia most of Thursday morning, according to WDUN meteorologist John Weatherbee. "The heaviest rains will come up through Florida, across the panhandle into southern Alabama, southern Georgia, eventually into northwest Georgia," Wetherbee said. "ZETA will be moving fast enough through Alabama to reach Georgia still generating tropical-storm-force winds. In other words, the storm will not have time to weaken as it might normally do." By definition tropical storm force winds could be anywhere between 39 and 74 mph. Weatherbee adds that some models are forecasting 40-55mph winds, with higher elevations seeing winds as high as 60mph. Winds are expected to die down by 2 p.m. on Thursday afternoon.

Weatherbee says that in addition to the potential for 2-4" of rain, some spots in the North Georgia mountains could get up to 8". Rainfalls are being compared to the nearly 6 inches that fell in the aftermath of Hurricane Delta, which caused widespread floods in parts of Hall, Habersham and White counties, among others.