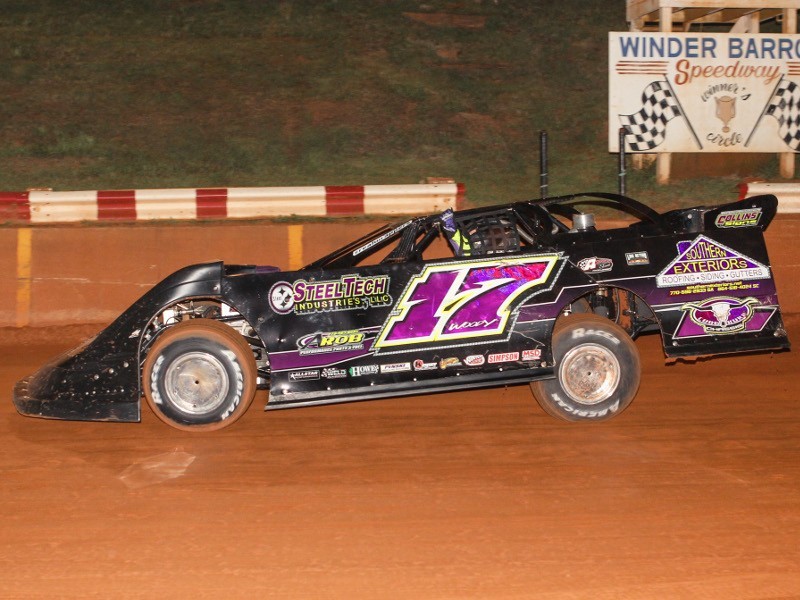 He ended it leading the Limited Late Model feature wire-to-wire en route to the victory at the ¼-mile clay raceway.

Woods, from Statham, Georgia, turned a blazing fast lap in qualifying earlier in the night with a lap of 13.87 seconds.

In the feature, Woods powered to the lead on the drop of the green flag, with Ken Lampp and David McCoy trying to keep pace.

Lampp closed to within four car lengths of the leader at one point, but never go close enough to mount a challenge as Woods drove to the victory in the caution free feature.

Lampp had to settle for second, with McCoy in third, Nick Sellers in fourth and Brandon Roberts in fifth.

In other action, Cade Cagle scored the win in the 602 Hobby feature, with Chase Lampp following in second. Nick Sellers, who set a new division track record in qualifying with a lap of 14.50 seconds, finished in third, followed by David McCoy in fourth and Michael Lewis in fifth.

Mark Chancey was the winner in the Stock V8 feature, with Stephen House and Jr Carter rounding out the podium.

Zack Sanders scored the victory in the Stock 4A feature. Matt Garrin followed in second, with Allen Cantrell in third, Bobby Shelton in fourth and Joseph Dyer in fifth.