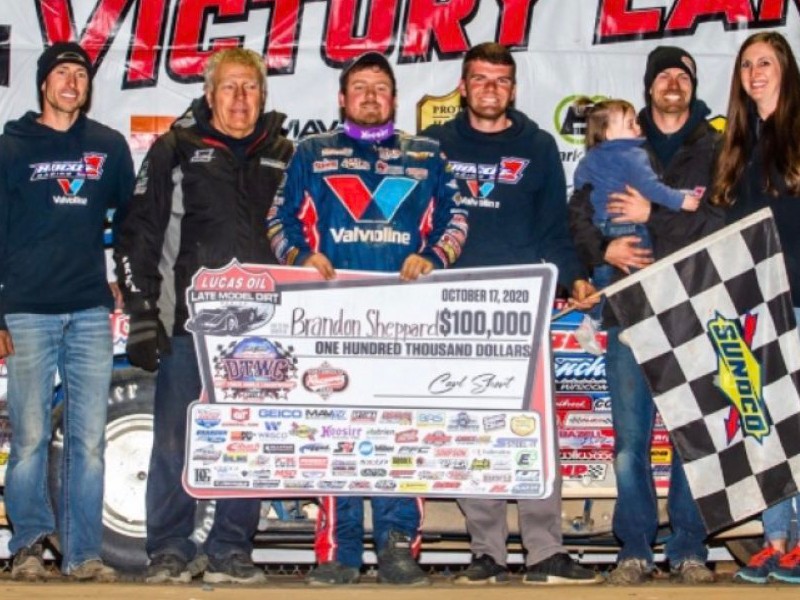 Sheppard earned $100,000 for his fourth career win in the crown jewel event, becoming the third driver in the 40-year history of the race to score back-to-back wins, joining Josh Richards and Scott Bloomquist.

Ricky Thornton, Jr. finished in second for his best career finish in the event with Tim McCreadie claiming third at the finish. McCreadie had led the first 23 laps of the 100-lap affair until yielding the top spot to Sheppard, who started 11th. Chris Madden, in his first DTWC start in 14 years, finished in fourth and 22nd-place starter Tyler Erb rounded out the top five drivers at the finish.

McCreadie, who had already clinched second place in the championship point standings, sprinted to the lead at the start of the richest first-place prize money offered in dirt late model racing this year. McCreadie held off challenges from last year’s DTWC runner-up Mike Marlar for several laps until Marlar lost the second spot to Sheppard on lap 21.

Sheppard made his move to the lead three laps later taking over the top spot on lap 24. Zack Dohm was on the move taking the second spot on lap 35 and started to challenge Sheppard for the lead. Dohm pulled even with Sheppard a couple of times until lap 75 when Thornton moved into second place. Thornton held the second position until the finish.

“I will tell you what, I love this place,” said Sheppard. “As hard as it’s been all weekend I knew it was going to be around the bottom at the end of the race. I knew when I rolled out there for the race, drive as hard as I could to get to the front as soon as I could. So that was kind of the game plan. We went a little different on tires than we normally do here. We had an early game, but once we got the lead we didn’t know what we were going to do.

“Our car was good just like it has been all year long. I think that’s 31 wins this year so that’s really awesome. During those cautions I had too much time to think about my right rear tire for sure. When I was in lap traffic I tried to pass them one time and I didn’t feel good and so I tucked back in behind them. Zack showed me his nose on the outside and when he showed the line a little bit different in one and two, that got me going a little bit better.”