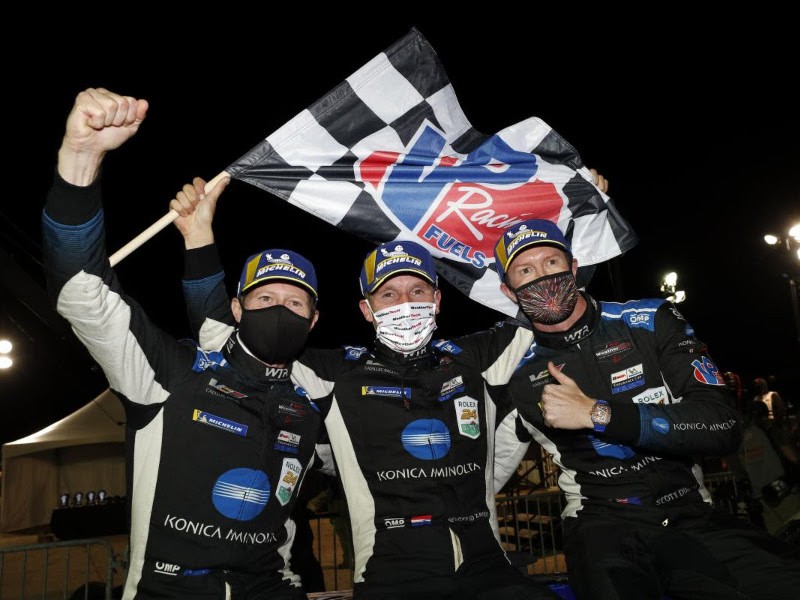 Van der Zande and the No. 10 Cadillac DPi.V.R were running in third place, nearly 20 seconds in arrears of Pipo Derani (No. 31 Whelen Engineering Cadillac) and Ricky Taylor (No. 7 Acura Team Penske Acura ARX-05) when the leaders came together in turn 6 with around 12 minutes to go in the 10-hour endurance race on the Braselton, Georgia road course.

The No. 31 Cadillac and the No. 7 swapped the lead several times on the track and in the pits over the final two hours and the intensity of the battle was obvious as the race drew to a close. The leaders were rarely separated by more than a second over the last 60 minutes of the race, with Taylor putting Derani under extreme pressure on several occasions.

Working through traffic in the Esses, Taylor got a run on Derani and tried to outbrake the Cadillac into turn 6. But the Acura appeared to lose front end grip. It nudged Derani’s car and sent it spinning backwards into a tire barrier. Taylor also spun and nearly collected van der Zande as he returned to the track. IMSA officials reviewed the incident, but decided to take no action against either driver.

Taylor and teammates Helio Castroneves and Alexander Rossi recovered to finish second, with the sister Penske Acura driven by Dane Cameron, Juan Pablo Montoya and Simon Pagenaud taking third. The race ended under caution after the No. 912 Porsche in the GT Le Mans (GTLM) class crashed with less than five minutes left on the clock.

The No. 6 Penske Acura dominated the first half of the race but got swept into an incident involving three other cars near the pit exit. The No. 5 Mustang Sampling Cadillac shared by Sebastien Bourdais, Loic Duval and Tristian Vautier finished fourth, with Derani, Felipe Nasr and Felipe Albuquerque classified fifth.

Van der Zande cut about 10 seconds of his deficit to the leaders in the final hour, but he appeared too far behind to think about victory until Taylor and Derani clashed.

“I was just chipping it down and chipping it down,” van der Zande said. “We kind of gambled on the setup, and in the hot, it was not so easy. But in the dark, when it was colder, the car was really flying. We’ve been working so hard on the car, and this was really nice.”

Briscoe and van der Zande opened an eight-point gap over Taylor and Castroneves in the DPi point standings, with Derani third, 12 points behind the leaders.

“This is massive,” exclaimed Briscoe. “It was such a great finish, and it just shows never give up and just hang in there. Renger did a hell of a stint there at the end, and he kept saying, ‘I’m not going to give up.’ Then fortune fell our way. We had a fast car all afternoon and I’m just so proud of this team.”

Derani was extremely unhappy with Taylor, and went to the Penske pit to exchange words with his rival after the race.

“I was in front, and he pushed me out. That’s it,” Derani told reporters. “There’s nothing much to say, and unfortunately we lost the race. We did everything we could, leading the race with 10 laps to go, and he just pushes me out on a desperate move to try and go to the lead. I think it was a mistake on his part, and I hope he sleeps on it.

“I lost a little bit of respect for him and for his teammates, who tried to accuse me of doing something wrong,” added the Brazilian. “It is what it is. I’m not at a racetrack to make friends – I want to win the next one.”

In LMP2, the No. 8 Tower Motorsports by Starworks ORECA LMP2 07 seized the lead in the ninth hour and John Farano, Mikkel Jensen, and Job van Uitert cruised to an easy victory.

The No. 52 PR Mathiasen Motorsport Oreca shared by Patrick Kelly, Simon Trummer and Scott Huffaker dominated the first eight hours of the event, but an off-course excursion by Trummer while running second in the final hour ended the team’s effort. Kelly still maintains a comfortable lead in the LMP2 point standings.

The No. 8 entry was two laps down to the No. 52 at one point as driver rotations evolved, but clever pit strategy and hard driving put them in front.

“Luckily you can get some laps back with full course yellows,” said van Uitert. “We did what we had to do, and in the end, it worked out fine.”

The dark cloud that has hung over a pair of GT entries in the 2020 IMSA WeatherTech SportsCar Championship season lifted under the lights Saturday night at Michelin Raceway Road Atlanta.

The No. 911, with Nick Tandy, Fred Makowiecki and Matt Campbell taking turns behind the wheel, won in the GT Le Mans (GTLM) class – logging Porsche’s first victory of the season and the first for the No. 911 since VIRginia International Raceway in August 2019.

GTLM honors appeared headed to the No. 24 BMW Team RLL BMW M8 GTE until near the end of the 10-hour race, when Augusto Farfus ran wide exiting the final turn and the car plowed through the dirt and grass just off track. Farfus was forced to pit to have dirt and debris cleared off the nose of the car and was relegated to a third-place finish.

Makowiecki was nearly 20 seconds back in second place when Farfus had his off-course excursion. After taking the lead in the No. 911, the Frenchman kept Antonio Garcia in the No. 3 Corvette Racing Chevrolet Corvette C8.R in arrears the rest of the way. A pair of late full-course cautions bunched the field but Makowiecki wasn’t deterred and took the checkered flag under yellow. It delivered the first Motul Petit Le Mans triumph for him and Campbell, and the fourth in the iconic race for Tandy.

“Petit Le Mans is one of the big races during the season, you really want to get it,” said Makowiecki. “It was a very tough race, tough weekend, and I’m so proud about my team because we did not give up. We had some good moments, some bad moments, but we had the right one.

“It doesn’t count to lead nine hours and 59 (minutes), what counts is the last minute.”

Campbell admitted to nervousness watching from the pit stand as Makowiecki closed out the victory. The Aussie was also part of the No. 911’s third-place showing in the Rolex 24 At Daytona in January.

After combining with No. 912 teammates Laurens Vanthoor and Earl Bamber to win six races and finish 1-2 in the points last year, Tandy admitted to the frustration that Porsche has faced in 2020. That just made Saturday’s triumph more the sweeter.

“We’ve had such a poor season; there’s so many things that have gone wrong,” he said. “Kind of in the middle of the race, it looked like we weren’t going to be that competitive. To come out with a win, my fourth at Petit, it’s amazing. This makes up for all the bad times that we’ve had during the season so far. Mega.”

The second-place finish by Garcia, Jordan Taylor and Nicky Catsburg allowed the No. 3 Corvette to widen its GTLM points lead to 28 over the No. 4 Corvette. Garcia and Taylor lead No. 4 drivers Oliver Gavin and Tommy Milner by the same margin with two races remaining.

The No. 63 Ferrari made it known from the start that it would contend in GTD, with Westphal taking the lead from the second starting position on the opening lap. The car remained near the front the entire race, despite absorbing contact on more than one occasion while battling in traffic around the 2.54-mile, 12-turn circuit.

Back in the car for the finish, Westphal made the decisive pass for the lead with just more than an hour to go. He pushed the No. 63 hard into turn 10 and past Jack Hawksworth in the No. 14 AIM Vasser Sullivan Lexus RC F GT3. From there, Westphal drove home the win – something he wasn’t expecting when the race weekend started.

“We showed up with a car that had great pace over one lap but it was killing the rear tires,” Westphal said. “Throughout each day, we made it better and better. We didn’t lose faith, we kind of just marched along and it really came alive in the race.”

It was Westphal’s third career IMSA win, the eighth for MacNeil and seventh for Balzan, who celebrated his 40th birthday in victory lane. On the heels of wrapping up a third straight Ferrari Challenge championship a week ago, MacNeil applauded the effort of his teammates and crew.

“This is one of the most difficult races in the world, even though it’s ‘only’ 10 hours,” he said. “These two guys drove their asses off, it was phenomenal all weekend. The team worked super hard all weekend, the Scuderia Corsa WeatherTech guys, I can’t thank them enough. We rolled the car off the truck expecting a good car because we had a good car during the six-hour here. That wasn’t the case; we had to work hard at it.”

Telitz unofficially moved into the points lead, two ahead of Hawksworth and four up on No. 16 Wright Motorsports Porsche drivers Ryan Hardwick and Patrick Long.