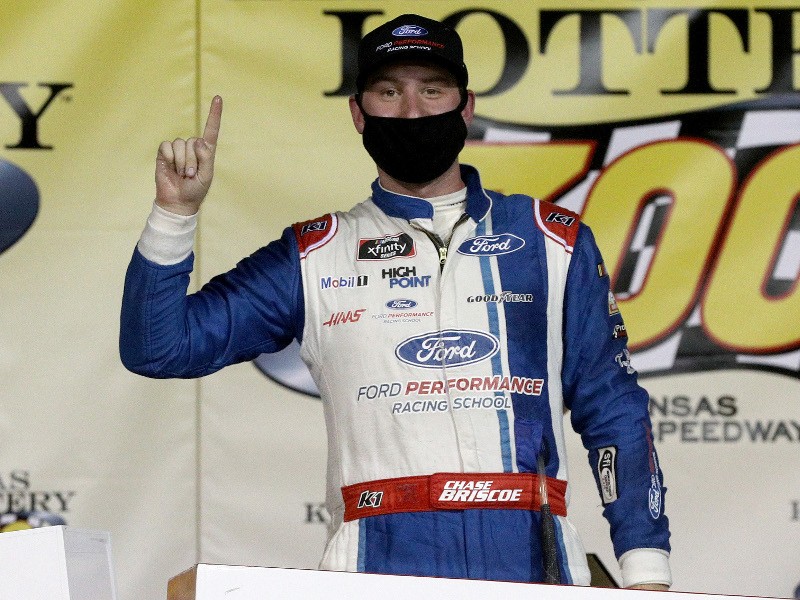 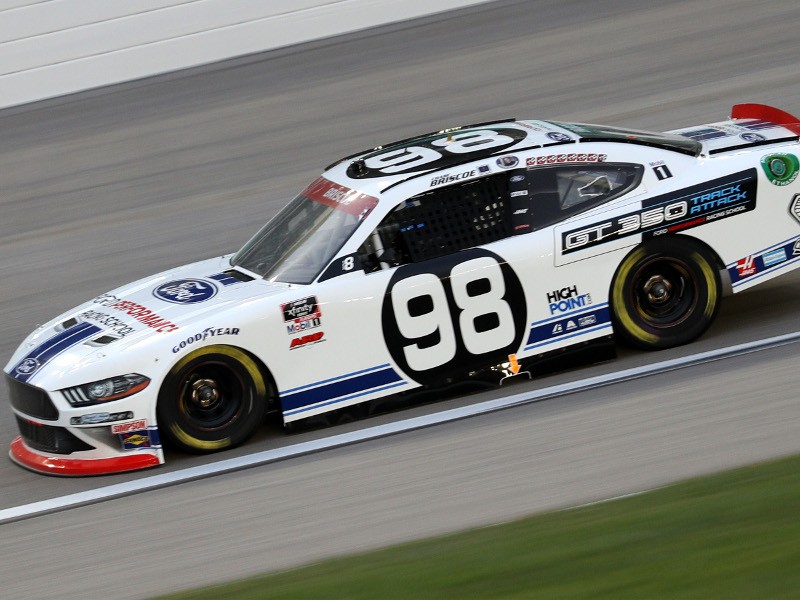 While the 25-year old Hoosier turned in a dominating effort, the race – a crucial chapter in the 2020 Playoff run – was dramatic in multiple ways.

Briscoe’s No. 98 Stewart-Haas Racing Ford ultimately edged Daniel Hemric’s JR Motorsports Chevrolet by 1.199-seconds to earn his ninth trophy of the season. Just as importantly, the victory gives Briscoe an automatic position in the Championship 4 round to decide the season title on November 7 at Phoenix Raceway.

“Super happy to lock into Phoenix, it’ll be a lot less stressful the next two weeks,” Briscoe said. “That’ll be nice. Can’t say thank you enough to everybody at Stewart-Haas Racing, this Ford Performance Racing School Mustang was lights out.”

Fellow Playoff driver Ryan Sieg, driving for his family-owned team from Tucker, Georgia, finished third, leading the race with 23 laps remaining and making a bold Playoff statement in his first appearance in this round of championship competition.

It was certainly an overall impressive night for Moffitt, who won the NASCAR Gander RV & Outdoors Truck Series race at the 1.5-mile Kansas track an hour before the Xfinity Series green flag dropped.

While Playoff drivers such as Briscoe, Sieg, Haley, Jones and Allgaier turned in a productive opening race to the Round of 8, it was a much different night for fellow title contenders Ross Chastain (finished 12th), regular season champion Austin Cindric (finished 28th) and Noah Gragson (finished 36th).

Chastain’s effort was inspired considering his No. 10 Kaulig Racing Chevrolet was dinged up in several incidents on the night. Cindric and Gragson were involved in a large multi-car accident while the field was racing three and four-wide at the beginning of the race. Cindric’s Team Penske team was able to repair his No. 22 Ford Mustang enough to continue to turn laps, albeit well out of contention. Gragson’s No. 9 JR Motorsports Chevrolet was too heavily damaged to continue.

The result is a massive turnaround in the Playoff points standings. Cindric and Allgaier came into Saturday night’s race ranked second and fourth among the eight championship-eligible drivers, but their misfortune at Kansas cost them significantly.

Cindric is now fourth, with only a slight two-point advantage over Haley. Gragson fell to eighth among the eight drivers and is now 33 points before the cutoff line as the series heads to Texas Motor Speedway next week.

Allgaier moved to second place – just behind Briscoe and has an 11-point edge on fifth place. Jones, the two-time defending Kansas winner, is now ranked third, nine points up on Haley. Chastain (-12), Sieg (-17) and Gragson (-33) round out the Playoff standings heading to the Lone Star state.

“We were in the middle, four-wide and it’s tough,” Gragson said after being checked in the track’s Infield Care Center. “We all get crowded off turn 2 on the restart. It’s a bummer and definitely frustrating. But we were racing for the lead, just a racing deal.

“We’ve got good speed at Texas in the past so I’m confident about that and we are extra motivated,” he added. “That’s the good thing about these Xfinity Playoffs. You don’t want to have a bad race but if you do, it allows you to rebound. We’re going to have our heads held high this week.”

One of the most dramatic parts of the race involved a multi-car accident on a restart with 28 laps remaining. While racing among the top-10 for position RCR driver Anthony Alfredo’s No. 21 Chevrolet took a tumble on track and ended up upside down. The race was red-flagged as the NASCAR safety crew immediately came to Alfredo’s rescue, carefully righting the car and helping Alfredo out. He walked to the ambulance and spoke to reporters minutes later.

“That was the craziest thing I’ve ever experienced and definitely shows how fast things happen in racing,” Alfredo said. “I’m just glad to be okay and first off, I’ve got to thank the NASCAR safety crew for being there immediately before I even realized it was (flipped) over.

“It was just racing hard. We had an extremely fast Chevrolet Camaro tonight.

“I’m very thankful for the safety team, our safe race cars and all the safety equipment that goes into keeping drivers safe in the race cars.”