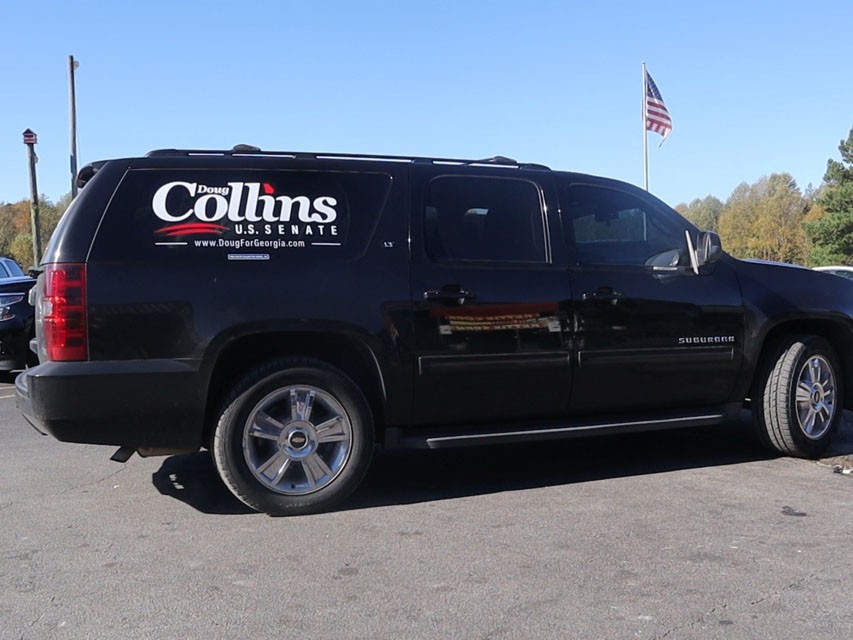 Congressman Doug Collins and his campaign team kicked off a sixty-stop, statewide tour this morning at Jaemor Farms in Alto.
Contact Editor

Congressman Doug Collins and his campaign team kicked off their “Trump Defender” tour at Jaemor Farms this morning, only seventeen days ahead of the election.

The tour includes sixty stops in cities all across Georgia, from Hartwell and Blue Ridge down to Milledgeville and Valdosta. The tour will end in Gainesville on November 2.

Several state representatives and conservative leaders are joining Collins on the tour. Representatives Terry Rogers and Lee Hawkins appeared at the kickoff today, as well as Matt Schlapp, president of the American Conservative Union.

When asked about his support of Collins, Schlapp said, “I’ve come to realize in the United States Senate, we need fighters…what I’ve seen in Doug Collins from the time he’s been in the House of Representatives is he is one scrappy guy who fights for the things that are gonna keep America on the path that we need to be on.”

Schlapp said that he specifically appreciates the way that Collins supported President Donald Trump during the impeachment hearings.

“What Obama and Biden did, using our intelligence communities to spy on and stop Trump…Doug Collins helped bring that story to light,” said Schlapp. “He fought every day to make sure there’s gonna be some justice when it comes to these things.”

Before leaving for his next campaign stop, Collins addressed a crowd of roughly one-hundred supporters inside The Barn at Jaemor Farms.

In his opening statement, Collins compared the beginning of his tour to the start of hunting season.

“We’re hunting to find the rest of the votes we need to be your next United States Senator from Georgia!” Collins said.

He spent the remainder of the speech reinforcing his status as a conservative and denouncing some of his opponent’s, current U.S. Senator Kelly Loeffler, claims against him.

“If you want a true, conservative, you elect Doug Collins,” he said. “We’re tested, we’re proven, we’re trusted. We don’t have to make up what we’ve done and we don’t have to go out and try to lie about it.”

During the tour, Collins and his family are planning to ride in their personal suburban, while other members of the campaign will travel in a fifteen-passenger van that “runs on liberal tears”, according to a press release.

Collins said that this travel method contrasts to Loeffler’s method of flying in a personal jet.

“Look, this is not the money campaign,” said Collins. “I don’t have a jet to fly around, I can’t put millions of dollars in [the campaign] but what I can do is put in hard work and the people’s values first.”

Collins, Loeffler and eighteen other candidates will face off for the Senate seat in the special election on November 3.