North Hall wins thriller in Cleveland; tied for first in Region 7-3A 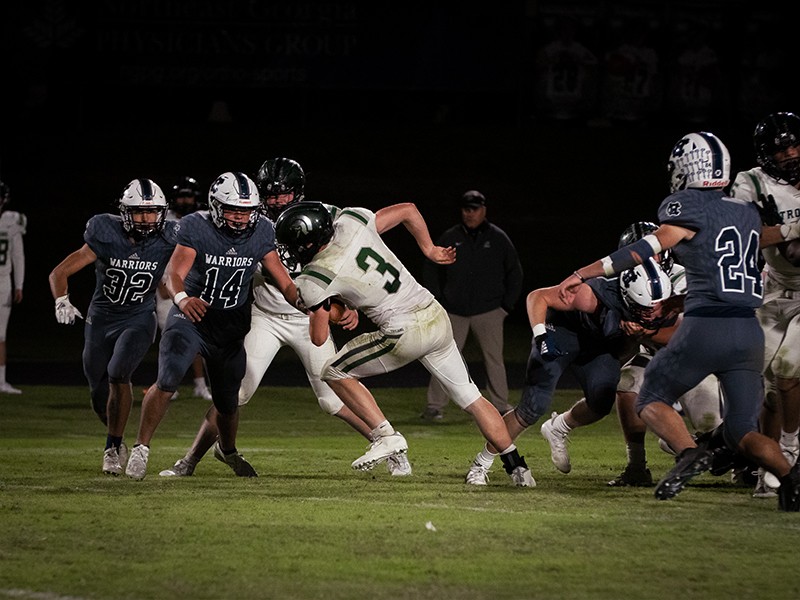 CLEVELAND — North Hall’s Clark Howell made the biggest play of the game on defense.

The senior safety dropped White County quarterback Riley Stancil for a loss on 4th down and short in overtime to give the Trojans one more shot to win.

North Hall kicker Luke Brown answered the call, booting a 17-yard field goal in overtime to beat White County, 34-31, at Warrior Stadium on Friday. The win lifts the Trojans (3-3, 2-0 Region 7-3A) to the top of the region standings with Cherokee Bluff.

“We talked about controlling our emotions and playing the best we’ve ever played in Cleveland,” North Hall coach David Bishop said on the Hardy Chevy Scoreboard Show. "Typically, we come up here and not play well. I was so proud of our kids. Nobody expected a lot out of this bunch, and they’ve proven they are better than what people say they are, and really, they played their hearts out for four quarters on both sides of the ball. It is without a doubt, I think the most complete game, regardless of the quality of the team we’ve had from all the years I’ve been here, that we've played. I’m so, so proud of our kids.”

Howell also paced the Trojans’ offense with 143 yards on 23 carries and one touchdown. Kevin Rochester added 86 yards on 18 rushes and a score.

The Warriors’ (4-2, 0-2 Region 7-3A), playing without star quarterback J. Ben Haynes, biggest Achilles heel were penalties, 10-for-102 yards, including a massive offsides call in overtime on a missed North Hall field goal that would have sent the game into double overtime.

It was all part of the overtime drama.

Brown pushed the potential game-winning field goal wide right, but the Warriors’ offsides penalty gave the Trojans a first down on the White County five-yard line. Two plays later, Howell thought he dove into the end zone only to be called less than a yard short of paydirt.

“Everybody but the refs thought it was a touchdown,” Bishop said. “But that’s part of the game.”

Two plays after that, Brown lined up to send the ball through the uprights for the win.

“It did become a little emotional there,” Bishop said. “We did miss the field goal – it was wide right – but they had jumped offsides which gave us a first down. I was going to play it safe and felt like we were close enough to punch it in and if not, we would kick the field goal. Luke really responded in that situation, especially after missing the first one.”

North Hall’s plan was to grind the football and control the clock and it almost paid off in regulation, but White County’s Stancil and wide receiver Darius Cannon had other plans, especially in the fourth quarter. The two connected on two big-play scores – a 73 and 77-yard score. The 77-yard strike to tie the game with 3:43 to go. The Warriors also had a shot on their final drive in regulation, but time ran out as Stancil hit Cooper Turner on a pass over the middle into North Hall territory.

Stancil ended the night 12 of 20 passing for 321 yards, three touchdowns and an interception and 22 carries for 93 yards and a score. Cannon had himself another huge night receiver, hauling in six passes for 251 yards and three touchdowns. Turner finished with 62 yards on four receptions.

TROJANS’ OFFENSE IS CLICKING ON ALL CYLINDERS

North Hall’s offense has found its groove over the last four weeks, scoring 125 points and amassing more than 1,200 yards offense. Bradford Puryear has been instrumental in the success, along with Howell and Rochester and company.

Puryear completed a 62-yard pass to Ajay Jones in the first quarter for the Trojans' first score and found Rochester late in the fourth quarter on an 8-yard strike. Bishop said Puryear is becoming a student of the game.

“He’s able to get kids into formations when I call them,” Bishop said. “He’s able to read the coverages and do a lot of things and so, I’m trusting him more and more to do more. Even though we didn’t throw it five or six times tonight, but the times we threw it, I’m trusting him to make the plays, and tonight he did.

“I’m so proud of my coaches, were able to do some things, like tonight we ran plays that we don’t ever run, and the kids made adjustments because we were able to see things and take advantage of them. Just things that we don’t typically do but the defense gave them to us and hats off to my coaches and kids for being able to execute the stuff.”