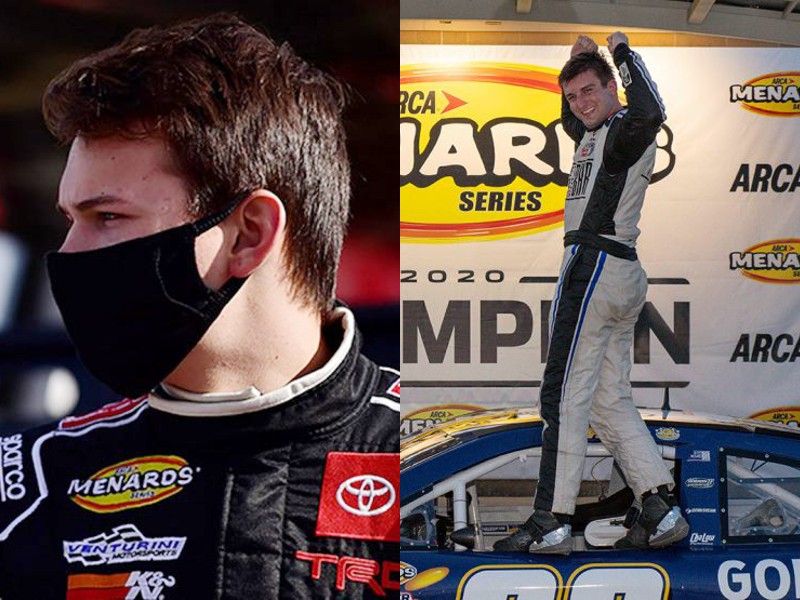 KANSAS CITY, Kan. – The last race of the 2020 ARCA Menards Series season was all about firsts.

Eighteen-year-old Corey Heim from Marietta, Georgia earned his first ARCA Menards Series win in his 16th start on Friday night at Kansas Speedway. The driver of the No. 10 Toyota dominated much of Friday night’s Speediatrics 150, leading 82 of 100 laps.

Meanwhile, Bret Holmes, who said he entered the season not knowing he would run a full season let alone contend for a title, did more than enough with his second-place finish to clinch the series championship. The 23-year-old from Munford, Alabama, won his first title in his fifth season of ARCA Menards Series competition.

“The two things I’ve ever wanted was for my friends and family to be proud of me through racing, and for my team to have the same respect as the others,” said Holmes, who entered the season finale with an eight-point lead over second-place Michael Holmes in the championship standings. “I think we’ve earned that today. We paid our dues, and it’s a really special feeling.

“We’ve worked a long time for this. There’s been many times where I thought about quitting, but I had a lot of people that didn’t give up on me, and this team, they just built me great race cars, cars to win every week. It just makes it real special. I’m real proud of them.”

Holmes won the Dawn 150 when the ARCA Menards Series visited Kansas in July, his first career win and only victory in 2020. His No. 23 Chevrolet started second in Friday night’s race with the field set owner points, and Holmes led the first 18 laps as Self battled early fuel pressure.

Holmes entered the season finale needing just a third-place finish to guarantee himself the championship regardless of what Self did – and his Bret Holmes Racing team delivered more than enough points.

“It’s been a tough road, for sure,” said Holmes. “Everything we’ve done has just been phenomenal this season, every decision we’ve made. To come out and not even know we were going to run the full season, and to finish it off like this is really special.

“To move to the next level, if it’s going to take me scratching and starving, that’s what I’m going to do. Because I know we deserve to be here.”

Heim took the lead from Holmes on lap 19 and never gave it back, though Holmes gave him a fight on multiple restarts.

“Really surreal right now, man,” said Heim of his first ARCA Menards Series victory. “I’m kind of at a loss for words. Craftsman, Toyota, Venturini Motorsports, all the people who make it happen, couldn’t have done it without them.

“(Crew chief Kevin Reed, Jr.) here, he did an awesome job just dialing me in. We were a little loose throughout the race, but I couldn’t have asked for much more on that last run, and here we are in victory lane. Couldn’t be happier.”

Self, who finished fifth behind Derek Griffith in third and Dylan Lupton in fourth, rebounded from going a lap down in the first quarter of the race due to the aforementioned fuel pressure issues. He earned the free pass at the first race break on lap 31 and made his way to fifth before failing to advance beyond that position.

“You know what, it’s OK,” said Self, who finished second in the ARCA Menards Series standings for the second consecutive season. “Life goes on. It’s disappointing, but my hat’s off to Bret and (crew chief Shane Huffman) and those guys. They did a really, really good job this year, and they had a lot of speed every race. They never made any mistakes.”

Hailie Deegan, who clinched the ARCA Menards Series Bounty Rookie of the Year award when she rolled off the grid Friday, finished sixth. The 19-year-old will make her first NASCAR Gander RV & Outdoors Truck Series start in Saturday’s Clean Harbors 200 at Kansas.