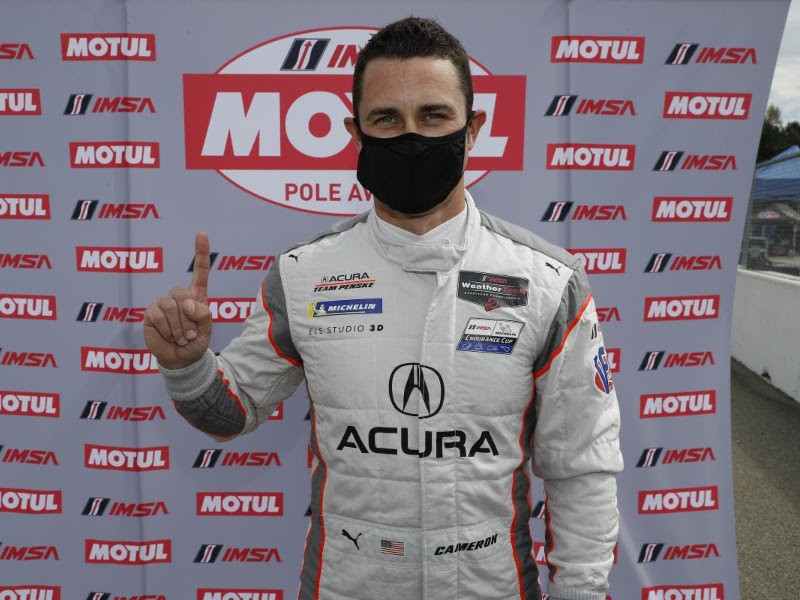 When it comes to IMSA WeatherTech SportsCar Championship qualifying lately, Acura Team Penske, Dane Cameron and Patrick Kelly must be butter, because they’re definitely on a roll.

“We’re very pleased,” said Cameron, who is co-driving with Juan Pablo Montoya and Simon Pagenaud. “I was a little disappointed when we came here for the six-hour run a few weeks back. Usually we are pretty aggressive with our stuff for qualifying and I thought we did a really good job, but we missed a little bit. I told the engineers, ‘Let’s really put the thing on the limit this time and see.’ I’m happy with what we ended up with, happy to get pole after missing out here the last time we showed up and the last couple of years here at Petit.”

It’s also the second consecutive front-row lockout for Acura Team Penske after Taylor claimed the outside spot with a lap of 1:08.506 (133.042 mph) in the No. 7 machine. He and co-driver Helio Castroneves will be going for their fourth consecutive victory on Saturday and are joined for the endurance race by Alexander Rossi.

In the LMP2 class, meanwhile, Kelly remained on the same hot streak he’s been on since July’s Cadillac Grand Prix of Sebring. In Friday’s session, the Minnesotan posted a best lap of 1:11.590 (127.727 mph) in the No. 52 PR1 Mathiasen Motorsports ORECA to secure the class pole position by more than a second and a half.

He will go in search of his second consecutive Road Atlanta victory with co-drivers Simon Trummer and Scott Huffaker, with whom he also won last month’s six-hour TireRack.com Grand Prix. Kelly also enters Saturday’s race as the LMP2 points leader.

Rob Hodes qualified second on the LMP2 grid with a best lap of 1:13.161 (124.984 mph) in the No. 51 Inter Europol Competition ORECA he is sharing with Austin McCusker and Jakub Smiechowski. John Farano qualified third in the class aboard the No. 8 Tower Motorsport by Starworks ORECA at 1:14.082 (123.430 mph). His co-drivers are Mikkel Jensen and Job van Uitert.

Track records fell by the wayside Friday in the Grand Touring classes of the IMSA WeatherTech SportsCar Championship for the 23rd annual Motul Petit Le Mans.

Meanwhile, Shinya Michimi powered the No. 86 Meyer Shank Racing with Curb-Agajanian Acura NSX GT3 around the undulating road course in 1:19.291 (115.321 mph) to lead the GT Daytona (GTD) field and reel in his first career Motul Pole Award. The depth of the GTD field was represented by a different manufacturer qualifying in each of the top five spots, with the first eight cars separated by less than a half-second.

Nearly perfect atmospheric and track conditions produced a remarkable jump in speed this week from years – or even months – past.

Nick Tandy extracted a quick lap of 1:15.858 from the No. 911 Porsche GT Team 911 RSR-19, some 0.3 seconds faster than he managed when he took pole position for the TireRack.com Grand Prix at Road Atlanta six weeks ago. This weekend, that time was only good enough for sixth in the GTLM class.

It was the third consecutive GTLM pole for the No. 3 Corvette, following top qualifying efforts from Jordan Taylor at Mid-Ohio Sports Car Course and the Charlotte Motor Speedway infield road course. Championship leaders Taylor and Garcia are looking for their third consecutive GTLM race win and sixth overall in 2020.

For Garcia, it was his sixth pole in IMSA competition and first at Road Atlanta. He set his best time with under three minutes remaining in the 15-minute qualifying session.

“Great job by the Corvette Racing crew, and I’m happy to get the pole,” said the 40-year old Spaniard, seeking his first Motul Petit Le Mans victory. “My first two qualifying laps were already very, very good, and I didn’t think I left anything on the table. On the cool-down lap, somebody told me on the radio that I lost pole position by a few hundredths of a second (to De Phillippi). Obviously, I had to go for it again and I put together a perfect lap.

“I really wanted this pole because I’ve lost many poles here by hundredths or even thousandths of a second,” Garcia added. “I have to look at the record books, but I think this is my first pole at Road Atlanta. Hopefully it leads to my first win here, because I’ve been waiting for a very, very long time.”

Michimi and teammates Mario Farnbacher and Matt McMurry won the six-hour GTD race at Road Atlanta on September 5, and the Meyer Shank team’s return to the popular Georgia venue is off to a successful start. Michimi edged by 0.239 seconds the GTD track qualifying record set last year by Corey Lewis.

“Everyone at the team is really happy about this, and I have to thank everyone at Meyer Shank Racing,” said Michimi, a 27-year old Japanese American who was born in Cincinnati and lives in Tokyo. “But at the end of the day, it’s only half the battle. We’ve got a long 10 hours tomorrow, and I think it’s going to be a tricky one.

“We were able to get a win last month here, but unfortunately the guys had some really bad luck in the races in between,” Michimi added, referring to fifth- and seventh-place results at Mid-Ohio and Charlotte. “We were all really hoping to bounce off of that success from last month and go in here on a really positive note. We started off correctly, so hopefully we can continue that tomorrow.”