AP Top 25 Reality Check: Can UGA vs. Bama be Game of the Century? 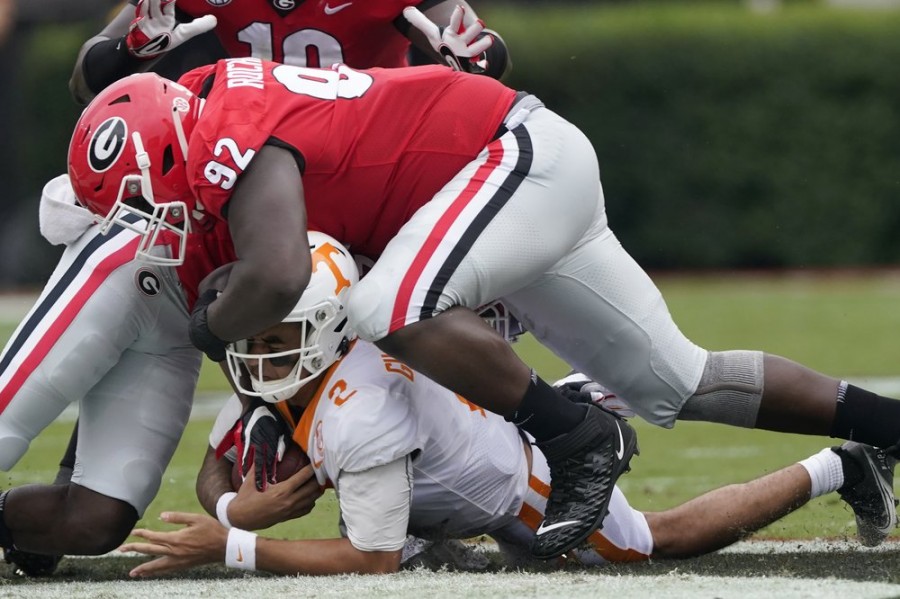 Tennessee quarterback Jarrett Guarantano (2) is brought down by Georgia defensive lineman Julian Rochester (92) after a short run in the first half of an NCAA college football game Saturday, Oct. 10, 2020, in Athens, Ga.
AP Photo/John Bazemore 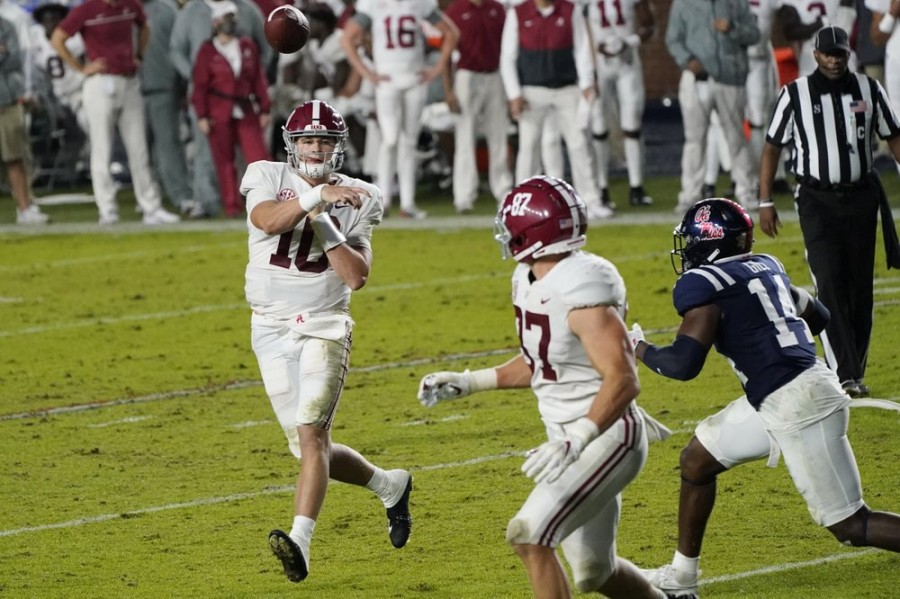 No. 2 Alabama hosts No. 3 Georgia on Saturday after the Crimson Tide and Bulldogs held their spots behind No. 1 Clemson in the latest AP Top 25.

The Tigers received 59 first-place votes, but don’t be surprised if that changes dramatically after Georgia and Alabama square off.

In college football history, the No. 1 vs. 2 regular-season matchups usually get the Game of the Century moniker.

There have been 24 of those in the history of the AP poll, dating to 1936, including LSU-Alabama last year.

The 2-3 game has been even more rare. This will be the 17th in the regular season, not including conference championship games, and the first since Ohio State and Michigan played one in 2016. You might remember it for an overtime spot on a critical fourth down that went the Buckeyes way.

Some of the other notable 2-3 games include: 1992 Miami-Florida State, aka Wide Right II; Colorado’s breakthrough victory against Nebraska in 1989; and Minnesota beating Michigan 7-6 on the way to the 1940 national championship in the first 2-3 game.

The game not only has Southeastern Conference championship and College Football Playoff ramifications, but the winner could very well grab the No. 1 ranking away from Clemson for the first time this season.

Reality check rolls through the Top 25 after a weekend that set the stage for a Game of the Century and bounced last year’s national champion, LSU, out of the rankings.

Next: at Georgia Tech, Saturday.

Reality check: For the second straight year the Tigers are primed to relinquish the No. 1 spot in the polls without losing. Dabo Swinney should clear some space on that billboard.

Reality check: Tide defense should be ecstatic about leaving Mississippi’s dynamic offense behind for the Bulldogs’ sledge-hammer approach.

Reality check: If this Bulldogs’ defense can’t slow down Alabama, then defense is truly dead.

Next: vs. Louisville, Saturday.

Reality check: The Irish have been mauling overmatched opponents with a talented offensive line. Look for more of the same this week.

Next: at Florida State, Saturday.

Reality check: Under normal circumstances the Tar Heels are probably not a top-five team, but as a group their top two running backs, top two receivers and quarterback is about as good as it gets in college football.

Reality check: Officially have run out of ways to say the Buckeyes are excellent as we await the start to their season.

Reality check: The Cowboys are this season’s inertia team, having climbed all the way to No. 7 mostly by not screwing up early in the season. Oklahoma State got an extra week off when Baylor needed to postpone Saturday’s game.

Next: at Tulsa, Saturday.

Reality check: See, above. Same applies to the Bearcats, who take to the road for the first time this season.

Next: vs. LSU, Saturday.

Reality check: Gators defense had held up OK against the run before being steamrolled by the Aggies. Now the whole defense looks lost.

Next: at Mississippi State, Saturday.

Reality check: RB Isiah Spiller was most responsible for steamrolling the Gators. The sophomore leads the SEC in yards per carry (6.87) and could become just what the Aggies need to take the pressure of QB Kellen Mond

Reality check: How much will the Ducks’ defense get from much-hyped freshman linebackers Justin Flowe and Noah Sewell?

Next: vs. Pittsburgh, Saturday

Reality check: No surprise the Hurricanes were not up to the task at Clemson. But an opportunity is still there for an excellent season against a schedule that includes maybe one team (North Carolina) that they won’t be favored against.

Next: at Houston, Friday.

Reality check: A close game against UTSA might have been a good thing for QB Zach Wilson and the Cougars, who are about to face a serious challenge for the first time this season.

Next: at South Carolina, Saturday.

Reality check: The voters were kind to the Tigers, who needed some serious help from the officials to squeeze past Arkansas.

Reality check: The Badgers have been pumping out pro linebackers lately, Next up: Jack Sanborn, who had 5.5 sacks last season.

Next: at Tulane, Friday.

Next: vs, Kentucky, Saturday.

Reality check: Much like Miami, the Vols aren’t ready to step into the ring with the heavyweights. That doesn’t mean they can’t have a big season.

Reality check: Another season of trying to determine whether Jim Harbaugh was so overrated that he has now become underappreciated is almost upon us.

Reality check: To put the Cyclones’ success under Matt Campbell in perspective, this from Iowa State sports information: Campbell is the third coach ever at Iowa State to win 20 or more conference games. Dan McCarney was 27-68; Clay Stapleton was 22-43; Campbell is 21-18.

Next: vs. Coastal Carolina, Wednesday.

Reality check: The Ragin’ Cajuns are allowing only 6.5 yards per pass, second-best in the Sun Belt. That pass defense will be tested by Coastal Carolina.

Reality check: The Wildcats have ridden a plus-seven turnover margin (second in the nation) to a three-game winning streak and Big 12 title contention.

Next: vs. Boston College, Saturday.

Reality check: The Hokies’ offense needs QB Hendon Hooker healthy and available to be more than one dimensional.

Reality check: The Gophers have never started and finished a season ranked. 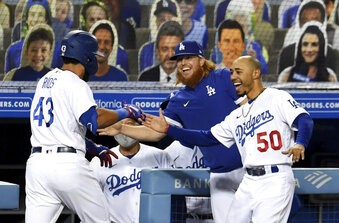 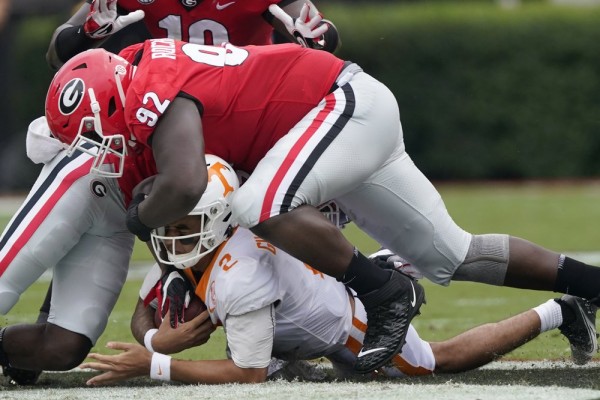 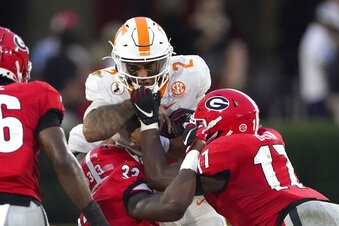 Dogs' defense catalyst for 2nd half domination of Vols
Tennessee charged off the field at halftime, seemingly holding all the momentum. But there were still two quarters to go. That time belongs to Georgia...
By The Associated Press 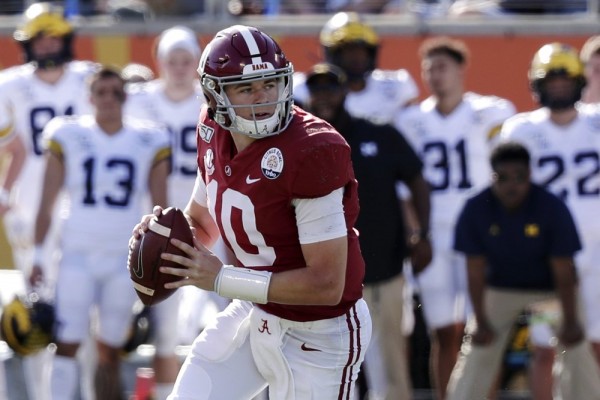 Alabama, SEC teams cranking up passing games
Quarterbacks and receivers have been the big stars in the Southeastern Conference through two weekends of games...
By The Associated Press 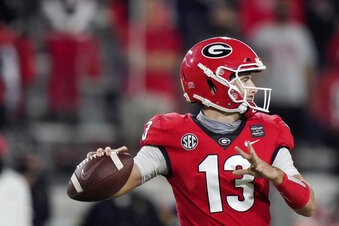 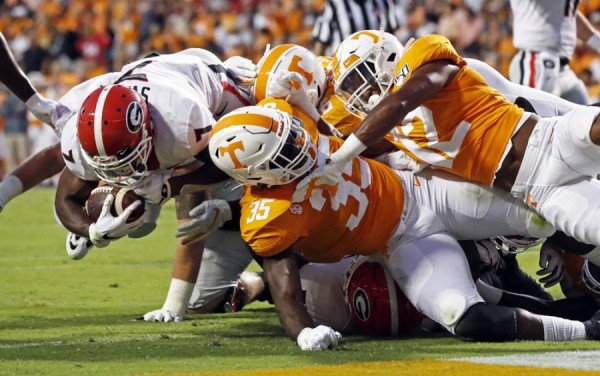 Georgia-Tennessee kickoff set for 3:30 p.m. on CBS
CBS announced on Sunday it will pick up the Georgia-Tennessee game, a top 25 matchup, in Athens in its 3:30 time slot on Saturday, Oct. 10.
By AccessWDUN Staff 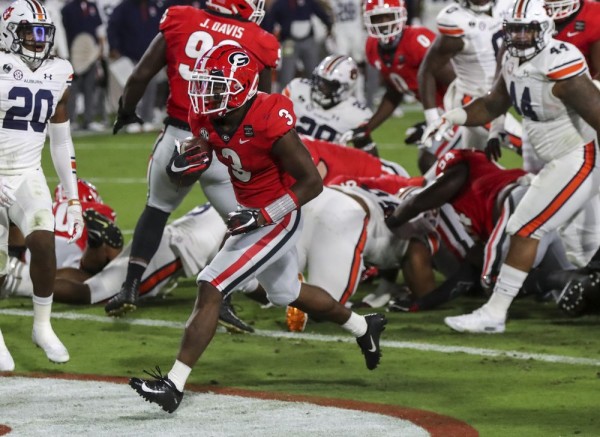