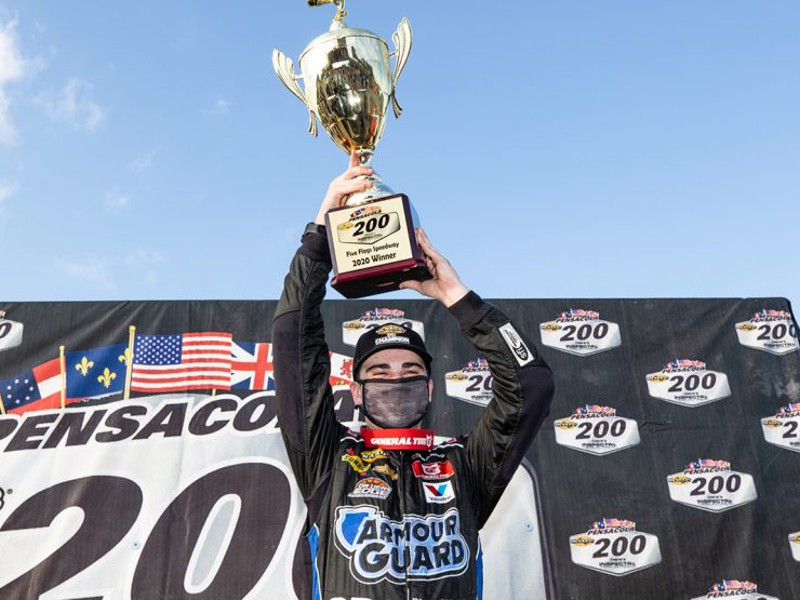 PENSACOLA, Fla. – Even for a driver who had won four of five ARCA Menards Series East races in 2020, Sam Mayer entered Sunday’s season finale at 5 Flags Speedway in Pensacola, Florida, with an unusual amount of confidence.

It turns out the 17-year-old’s conviction was warranted.

Mayer, who clinched his second consecutive East championship when he rolled his No. 21 Chevrolet off the grid to start the Pensacola 200, closed the season in style with his fifth win of the year.

“I don’t know what to say, this is an amazing feeling,” said Mayer. “I can’t thank everyone behind me enough for all the support they’ve done. I appreciate all the opportunities I’ve had these last couple weeks to come out here and win races like this.”

Sunday’s race result was very much in doubt when a caution just before the white flag set up an overtime finish with Mayer leading. The young driver from Franklin, Wisconsin, fought off a charge from ARCA Menards Series East Bounty Rookie of the Year Ty Gibbs on the last lap to seal a hard-fought victory.

“We definitely had to work for this one, for sure,” said Mayer. “We had an awesome (Truck Series) driver in the field that gave us a run for our money.”

That rival was Grant Enfinger, the 35-year-old NASCAR Gander Outdoors & RV Truck Series playoff driver who was racing at his home track on the Truck Series’ off weekend.

Enfinger won the General Tire Pole Award on Sunday and led 175 of 200 laps before finishing fifth. Mayer (31 laps) was the only other driver who led Sunday at the half-mile banked oval in Pensacola.

Corey Heim ended up passing Gibbs on the last lap to steal a second-place finish Sunday. Gibbs finished third ahead of Taylor Gray in fourth and Enfinger in fifth.

Mayer won the 2020 Sioux Chief Showdown championship in addition to last season’s East title under the NASCAR banner, which means he has now won all three championships for which he has contended at this level.

“That’s a crazy stat,” said Mayer. “Because we’ve only run for three championships, and we got them all. That’s pretty crazy that GMS (Racing) is just that good that they can kind of carry me almost getting all of these championships. Because I wouldn’t be anywhere without them and the driver development program at Team Chevy. Can’t thank them enough for the opportunities I’ve had to come out and run for these championships in the first place.

“Getting two championships in one year, I never thought I would have done that, especially going into New Smyrna this year. I expected to win at least one of them, but both of them, and locking them up pretty much going into the last race, is just huge for me.”

Mayer’s win to close the season gave him an average finish of 1.2 in the ARCA Menards Series East for 2020. He finished second to Gibbs at Toledo in the only East race he did not win.