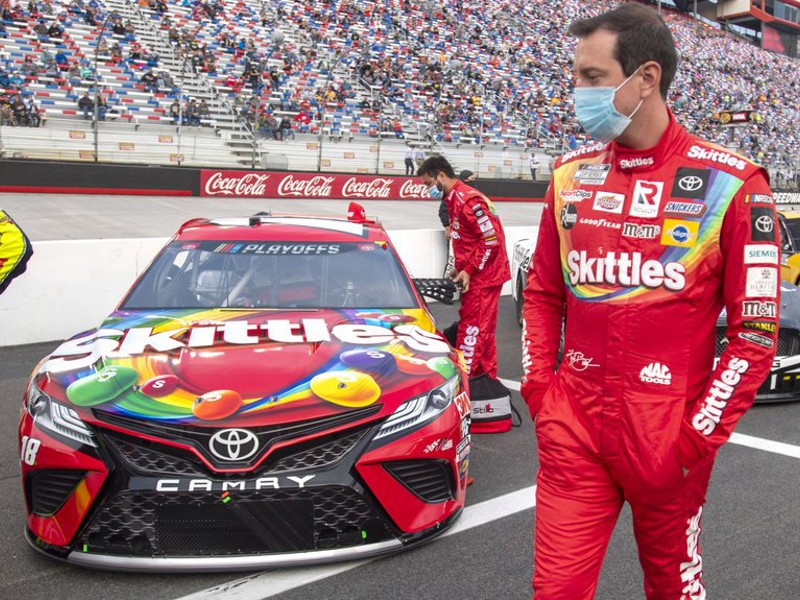 CONCORD, N.C. (AP) — Kyle Busch, to be clear, was only venting when he said he'd be knocked out of the playoffs this round. The reigning Cup champion insisted he was frustrated and flippant when he wrote off his season.

“I wouldn’t be continuing to go to the racetrack each and every week and pouring my heart and soul into this and taking time away from my family if I didn’t care,” Busch said. "That’s tongue-in-cheek talk and should be known as that, coming from me, obviously.

"It is what it is, and we’re going to go on this week and fight like hell and try to make it through.”

Here he is on the verge of elimination headed into Sunday's race on the hybrid road course-oval at Charlotte Motor Speedway. Busch is 21 points below the cutoff line and could become the first reigning champion eliminated in the round of 12 when four are trimmed from the field.

At stake is his bid to become the first driver to win consecutive titles since Jimmie Johnson won five straight from 2006-2010. Busch also would lose his five-year streak of advancing to the championship race, but even worse, his run of at least one win every year since his 2005 rookie season is in serious danger.

Busch doesn't need to win on the Charlotte Motor Speedway infield road course to advance, but there's only five races remaining for him to improve his season. Just one win will tie him for third on the all-time list at 16 consecutive seasons with Ricky Rudd, Rusty Wallace and Johnson.

“It’s really important. Think about it, it’s a 16-year investment," Busch said. "It would be nice if I’m able to keep winning races all the way through my career each and every single year that I’m out there.”

Only Denny Hamlin and Kurt Busch, Kyle's older brother, are locked into the round of eight. Below the cutline with Busch are Austin Dillon, Aric Almirola and Clint Bowyer, who recently announced he's moving to the Fox Sports booth at the end of this season.

The task Sunday is not just excelling on Charlotte's hybrid course, which was designed as a unique venue in 2018 specifically to enhance the playoffs, but also to adjust to adverse weather. The Sunday forecast calls for an 80% chance for rain and the road course portion of the track permits NASCAR to race in wet conditions.

The Cup Series has never raced in the rain and Goodyear on Saturday offered an explainer on the four sets of tires each team will have Sunday. The tires most closely compare to the consumer Eagle F1 all-season Goodyear tire and Juan Pablo Montoya assisted on their final development 10 years ago.

The Xfinity Series has raced in wet conditions before and the rain tires were needed Saturday in a slippery potential preview of the main event. Cars were hydroplaning all over the course, crashing into the wall and struggling to get the windshield wipers working.

That was from competitors who not only have raced in the rain before, but just did it in August at Road America. The Cup drivers have never before used rain tires in competition.

“It is fair. Everyone has the same opportunity,” said Joey Logano, eighth and in the transfer spot ahead of Busch.

Logano asked Team Penske driver Austin Cindric, who has raced in the rain in the Xfinity Series, for tips, but also wondered if there's a limit on how much rain NASCAR will tolerate.

“At what point ... is it too much rain? Is standing water or running water across the racetrack where you can hydroplane what is the line?" Logano wondered. "What is the drainage like at that racetrack through the infield road course? I don’t know.

"I’ve never really looked around when it was pouring rain to see how that road course drains, so there are so many questions that we have no answers to. We just have to expect the unexpected at this point.”

Charlotte Motor Speedway was able to open for the first time this year, with about 7,000 spectators permitted during the two-day race weekend. Because Charlotte is considered the home track for most of the locally based teams, the track atmosphere was upbeat for the first time since early March.