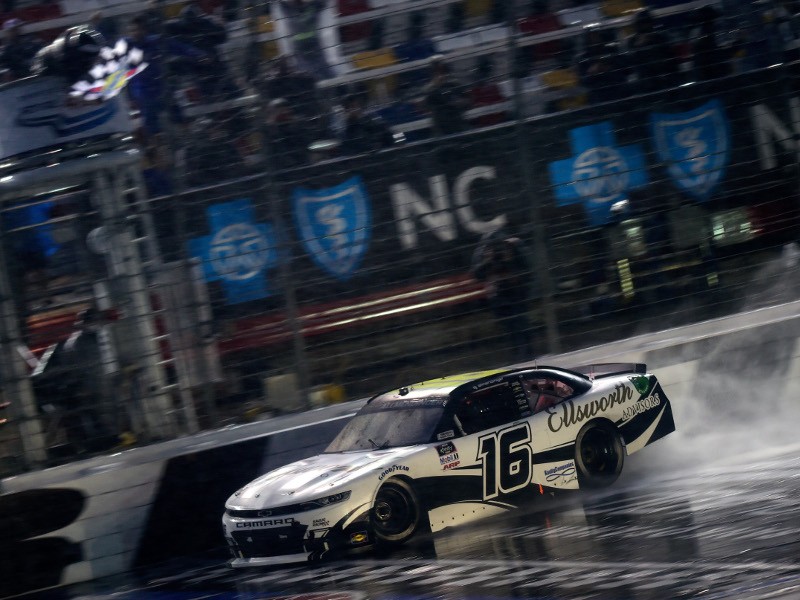 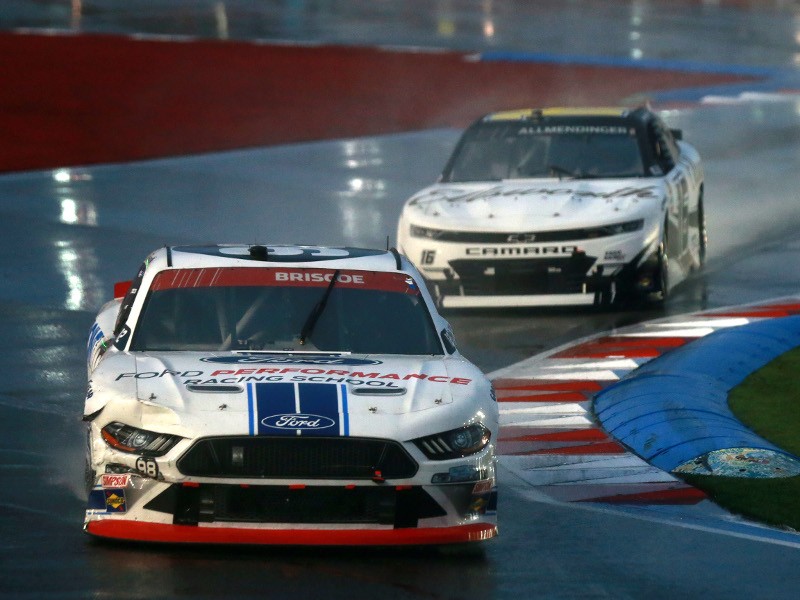 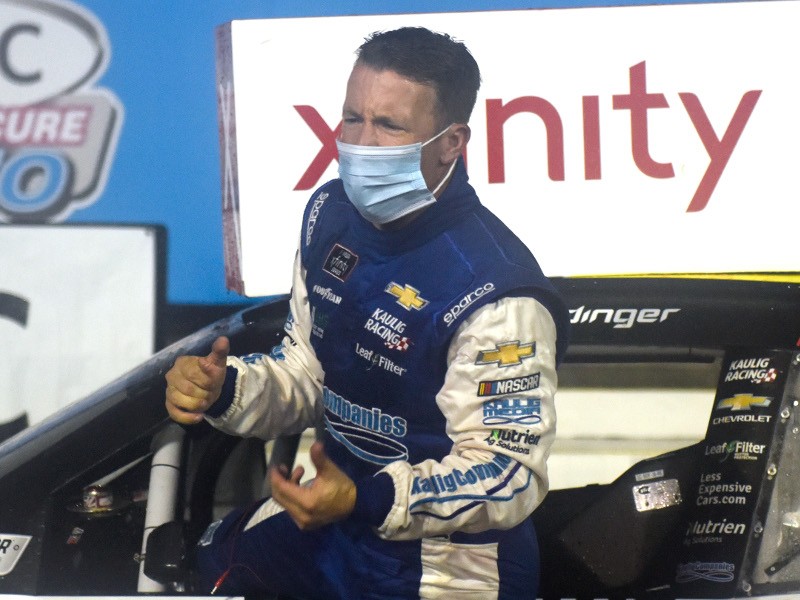 A.J. Allmendinger slogged his way to his second NASCAR Xfinity victory of the season in a soggy, messy, carnage-filled race on the infield road course at Charlotte Motor Speedway on Saturday in the final race of the Round of 12 for the Xfinity Series playoffs.

Allmendinger passed race leader Chase Briscoe at the start of a green-white-checkered overtime finish and held on to beat out Noah Gragson and Daniel Hemric to the finish.

It was the end of a miserable experience for Allmendinger and nearly all of the 12 drivers vying for a chance to move on to the next round of the playoffs.

“I was complaining the whole race,” Allmendinger said. “That was miserable.

“I don’t know what we just witnessed. Crazy. The 98 (Briscoe) was doing a fantastic job. I didn’t really have anything for him after a couple laps but I knew that final restart I was going to do everything I could.”

Briscoe came home 18th but still held onto the top seed for the next round of the playoffs, followed by Gragson, Cindric, Atlanta, Georgia’s Brandon Jones, Justin Haley, Chastain, Tucker, Georgia’s Ryan Sieg and Justin Allgaier.

Charlotte Motor Speedway’s first try racing in the rain was one of the most interesting NASCAR races in recent memory. With heavy rain in the area from the remnants of Hurricane Delta, the skies opened up just before the start of the green flag and had completely drenched the track by the time the field had compete the first stage.

The deluge prompted NASCAR to throw the red flag to try and clear the puddles of standing water from the track – an attempt that ultimate proved futile as the rain continued to fall through the course of the race.

The wet conditions wreaked havoc on the field, which struggled even with rain tires – which were never intended to compete in such conditions – yet NASCAR let the race continue.

The official tally of 10 caution flags from 24 laps doesn’t do the carnage justice, as cars were seen hydroplaning and getting sideway even in the straightaway’s and cars that wound up sliding in the grass tossed up torrents of water that looked like ships plowing through a hurricane.

“It’s nothing like I’ve ever done before,” said Hemric, who came home third. “I’m going to sit back with a cold one and watch (the NASCAR Cup Series race on the road course) tomorrow.”

Playoff contenders Riley Herbst and Noah Gragson tangled near the end of the first stage, continuing a rivalry that dates back to July at Texas Motor Speedway. Gragson was able to recover and eventually finished runner-up while Herbst finished 12th and was eliminated from the playoffs.

Playoff contender Harrison Burton blew a chicane late in the opening stage and missed out on a top-10 stage finish. Burton later dropped out with mechanical issues, as did fellow playoff contender Brandon Brown, who went off track to bring out the final caution flag.

Burton finished 33rd, while Brown ended the day in 26th. Both were eliminated along with Herbst and Michael Annett.

Points leader Chase Briscoe led a race-high 23 laps and spent the entire second half of the race fighting Allmendinger for the top spot.

Following a caution flag on lap 65, Briscoe led the field to the green flag for the first attempt at a green-white-checkered but spun out coming off turn one, handing the lead to Allmendinger who led the next three laps for the win.

“Driver just made a mistake,” said Briscoe, who finished 18th. “In conditions like this you’ve got to be at 100 percent and I tried going 110 and it bit me. Very unfortunate. That one’s going to sting for a long time. I feel like I did my job for about 95 percent of the day, right.”