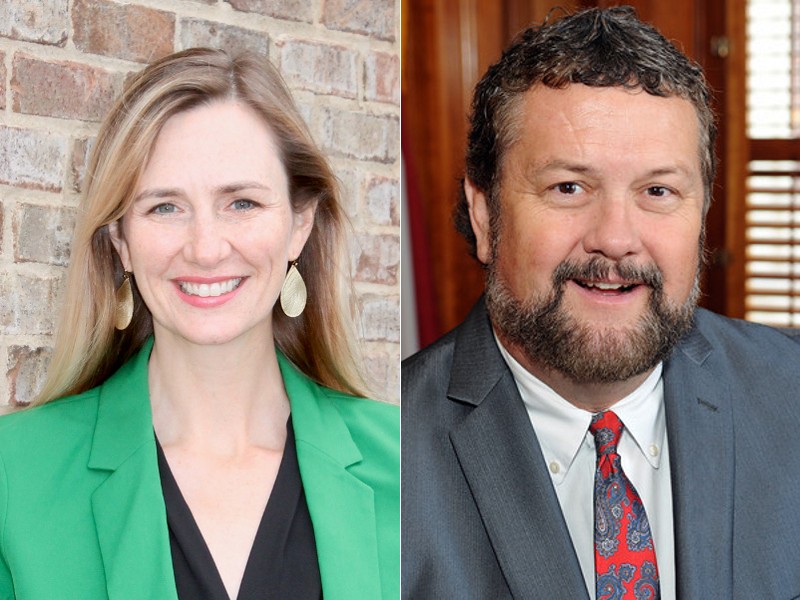 This is one in a series of stories previewing races in the Nov. 3 election.

Georgia State House District 30 encompasses an area that is diverse and growing.  Nearly 60,000 people call it home; it takes nine zip codes for the post office to serve that many people residing in lakefront communities, subdivisions, urban single family and apartment housing, as well as expansive rural neighborhoods.

At present House District 30 is represented by Republican Emory Dunahoo, Jr.  Dunahoo is completing his ninth year on the job, serving four full terms plus a partial term that began his time under the gold dome in Atlanta following a special election in 2011.

Dunahoo is facing Democratic challenger Leigh Miller.  This is Miller’s first foray into the political arena.

Last week both candidates were asked five questions by AccessWDUN about how they would try to serve Georgia House District 30.  Those questions and each candidate’s response in brief are below.

Question 1: Considering the diversity of District 30, what common issues facing its constituents do you plan to focus on if elected?

Dunahoo – Dunahoo says he plans to continue to focus on the same thing he has focused on for the past eight years: infrastructure.

“We should have put our infrastructure together before we started all our building,” Dunahoo says, but acknowledges that it didn’t work out that way.   As an example he points to issues with sewer availability and road congestion along Spout Springs and Friendship Roads.  “It should have been solved twenty years ago.”

He thinks it may be time to stop, or at least slow down development, and allow the infrastructure to be put in place.  “I think what we’re going to have to do is slow this (growth) down until we catch (up).”

A second area Dunahoo hopes to address is increasing hospital availability.  He likes what Northeast Georgia Health Systems provides but sees a need for even more patient care facilities.  “I feel like we’re going to have to create more surgery centers…or expansion to the hospital.”

Miller – Miller said three primary focuses are forefront with her.  “Almost everyone I know in this community is raising a family and is concerned about education.  We just want our public schools fully funded and our teachers to have the support they need.’

Secondly, Miller says affordable healthcare is a concern.  “Also, almost every family that I talk to is concerned about how to afford healthcare.  That is not unique to District 30; that is a problem throughout Georgia.”

Third on her list is the well-being of Lake Lanier.  “I want that lake to be clean enough for all of our grandchildren to be able to recreate and use it as a drinking water source.”

Question 2: You will be called upon to vote on legislation that effects districts on the other side of the state, places like Bainbridge and Brunswick, as far as 250-miles away.  What do you see as the most pressing needs in those relatively distant areas of our state?

Miller –Miller says she has learned from friends in both the Brunswick and Bainbridge areas that their concerns are very similar to the concerns she finds in District 30.  At the top of that list would be affordable healthcare.

“Seventy-six percent of Glynn County (Brunswick) makes poverty level (wages) or under, so we are really seeing folks that can’t afford healthcare.  Expanding Medicaid in our state would not only help District 30 but also our neighbors down in south Georgia,” Miller said.

“And they know that education is the ticket to a growing community, making sure good jobs come and stay in their area,” Miller added.

And like District 30, Miller says, environmental concerns in Brunswick run strong.  “They are concerned about their coastline…about the effects of climate change on their coastline…and they have a coal-ash situation and off shore drilling that really concerns the residents,” she said.

“Of course, rural hospitals is one of them,” he begins.  Dunahoo says the bottom line to solving the problem is that ways have to be found to make doctors want to stay in a rural location.  “You just can’t seem to keep doctors there.”

Dunahoo said he likes a state-sponsored program underway at Augusta University that entices doctors to stay in state.  “If you come here and do your residency here,” Dunahoo says of the program, “we’ll give you a five year exemption on some of your schooling, but you have to stay in Georgia.”

The second item Dunahoo says is in need of attention in rural areas of the state is broadband.  He likes the state program of putting internet signal enhancers on electrical and telephone poles, a simple solution which is helping somewhat, but a program that he feels needs to be greatly expanded.

And third, Dunahoo, like Miller, knows coal-ash has caused a big environmental problem in south Georgia.  “Coal from our power plants…they put in ponds…that had no liners…so coal-ash was going down into the water systems…and affecting peoples’ water sources,” Dunahoo explained.

Question 3: During the COVID-19 pandemic there have been situations where people in power have disagreed on policy: case in point, Governor Brian Kemp and President Donald Trump differed in April on the pace for re-opening Georgia businesses; then in June, Governor Kemp and Atlanta Mayor Keisha Lance Bottoms disagreed on requirements for the wearing of face masks.  The question is: who should have the final say-so when policies claiming to use the same scientific-based data differ, and why?

Dunahoo described the past eight months as “unchartered territory where nobody really knows what the best solution is in every situation”, but added that he favors local decision-making until definitive answers are learned.

As the owner of a small business she said she struggled with what to do to keep her business afloat.  “It was difficult and we were really looking for leadership on any level to help us, and I was very disappointed in our governor when he didn’t take the leadership role early on.”

She added, “We were put in this position where we had the freedom to decide, but we’re not public health experts…so I think it’s a little ridiculous to ask someone who is just trying to open their doors and sell a product to all of a sudden become a public health expert and determine if their customers should wear masks or not.”

“It would have been so much easier for us if we just had some leadership,” she said.

Question 4: What are your concerns with maintaining the integrity and accuracy of this election, especially in light of all the claims of voter fraud both now and in the 2018 election?

Miller – “I have a background of volunteering with voter registration drives, being very involved and just asking people to vote.  I think it is such a sacred right…and it is very close to my heart,” Miller said.

“So the fact that we have been seeing voter suppression on many levels in Georgia was very upsetting; I have seen it firsthand,” she continued.  “But I am really impressed with the job Hall County has done.”

Regarding the unprecedented increase in absentee ballot requests, Miller said, “I absolutely believe that is a safe way to vote. So I have a lot of faith here at the local level.”

Dunahoo – Dunahoo pointed immediately at the contentious race in Georgia for governor in 2018 as a catalyst for concern in the upcoming election.  “The atmosphere created by the Democrats, Ms. Stacey Abrams, was very concerned about voter fraud and absentee ballots, and the extension of deadlines.“

“Now they (Democratic Party) are trying to extend this way past November 3 to where they can cause controversy; they can say we do not have a President and even drag this into the first of January,” Dunahoo stated.

“I hope I’m wrong,” he added.  “(But) we have enough people and enough resources to make this election come out and we’ll have a true winner sometime around November fourth or fifth.”

Question 5: Why you feel you are the best candidate to represent Georgia House District 30?

Dunahoo – “I have a proven track record of nine years of experience behind me of balancing budgets, and we need that experience and background that I can give,” Dunahoo answered.

“We’ve also been voted the number one place to do business seven years in a row,” he said.

“That’s because (we) understand a budget.  I understand where we need to make cuts and you don’t spend what you don’t have, and I think…as a successful business man I understand budgets pretty well.”

“I understand the challenges that we face on a daily basis,” Miller said.  “And I am fighting to fix the laws so they actually help family.”