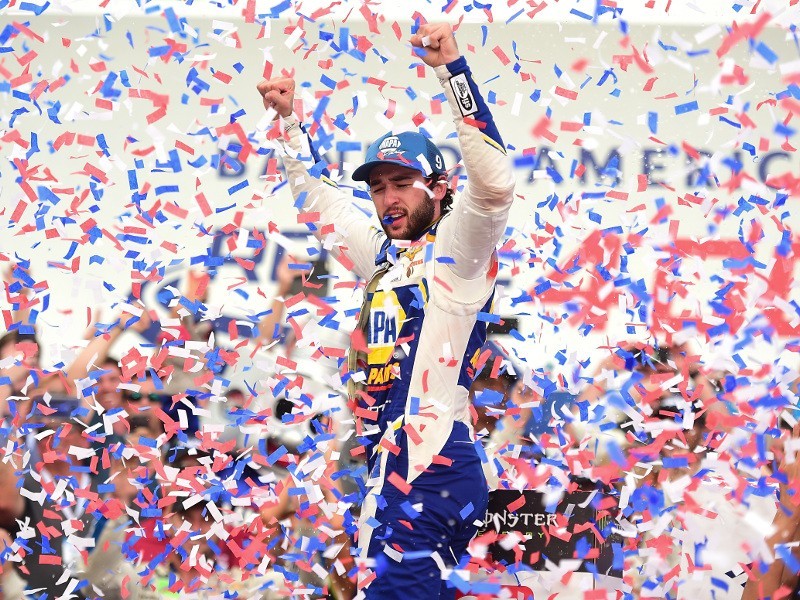 As if Sunday’s Bank of America 400 didn’t already stand to be a dramatic finale to the Round of 12 of the NASCAR Cup Series Playoffs, there is a possibility that the competitors may be racing for their championship hopes in the rain at the Charlotte Motor Speedway infield road course.

Road course racing in a Playoff cut-off race certainly has created the kind of thrilling anticipation fans crave and teams thrive upon. There is so much on the line this weekend, clear skies or raindrops.

Kurt Busch (Las Vegas) and Denny Hamlin (Talladega) won the opening two races of this Playoff round earning an automatic bid into the Round of 8 that begins next week at Kansas Speedway. Nine-race winner Kevin Harvick leads all other drivers in the standings in his quest to secure a first-ever single-season double-digit victory total.

Chase Elliott, who is ranked fourth in the standings, is the defending winner of the event and the winner of this season’s only road course event at Daytona International Speedway in July.

“We want to try to put ourselves in position to win, score as many points as you can on the days when you’re not in contention to win, and see where it all stacks up in the end,” said Harvick who earned two Playoff victories in the opening round of 2020 competition.

“You’re not going to do anything any differently just because of the fact you’re going to go and race as hard as you can. We’re going to bring the best car to the racetrack we think we can build. We’re going to put the best setup in it that we can. I don’t know what thinking about all that stuff really does because it wouldn’t change. Nobody is going to try harder or do anything differently than what we’re doing right now.”

So much of the attention this weekend, however, will be on the group of drivers on the other end of the Playoff standings – those vying for the last transfer positions. The top eight drivers following Sunday’s race are eligible for the next three-race Playoff round and the top four after that round will race it out for the NASCAR Cup Series championship November 8 at Phoenix Raceway.

Hendrick Motorsports driver Alex Bowman, who announced Wednesday he will be moving to the team’s No. 48 Chevrolet next season, is ranked sixth in the standings with a 22-point cushion over ninth place Busch and 10th place Austin Dillon. Team Penske’s Joey Logano – a two-time winner in 2020 – currently holds that all-important eighth and final transfer position in the standings, with a 21-point advantage on Busch and Dillon.

Clint Bowyer is 11th of the 12 Playoff drivers – 38 points behind the cutoff – and his Stewart-Haas Racing teammate Aric Almirola is 48 points back – essentially meaning both of these drivers will need a victory Sunday to continue their championship quest.

Of those four Playoff drivers currently outside the top eight in points, the two-time and reigning NASCAR Cup Series champion Kyle Busch certainly possesses the most outstanding resume. He has a pair of wins at both longtime road course venues in Sonoma (2008, 2015) and Watkins Glen (2008, 2013) – the only Playoff driver with multiple wins at both the historic venues. He’s tied with Elliott and Martin Truex, Jr. for most road course wins (four) among the Playoff contingent.

However, Busch, the driver of the No. 18 Joe Gibbs Racing Toyota has not fared as well on hybrid courses. He has Charlotte road course finishes of 37th (suspension problem) last year and 32nd (crash) in the venue’s 2018 debut. He finished 37th on the Daytona International Speedway Road Course this summer – the only other road course on this year’s COVID-19 amended schedule.

In fact, statistically-speaking the layout, a 2.28-mile, 17-turn venue that makes use of Charlotte Motor Speedway’s traditional speedway and a new infield road course, has been particularly challenging for three of the four drivers who must race their way into Playoff advancement.

Dillon, driver of the No. 3 Richard Childress Racing Chevrolet, has never led a lap or scored a top-10 finish on any of NASCAR’s road courses. His best work at both Sonoma and Watkins Glen is 16th and he has finishes of 29th and 23rd in the two Charlotte races.

Almirola, driver of the No. 10 Stewart-Haas Racing Ford, has fared similarly. He’s never led a lap on any of the series’ road courses and best career finish is eighth at Sonoma in 2018. He doesn’t have a top 10 in nine starts at Watkins Glen nor does he have a top 10 in the two Charlotte races – a 14th last year is his best showing.

Almirola, who scored his first career NASCAR Cup Series victory on the Daytona International Speedway oval in 2012, finished a disappointing 24th place on the track’s infield road course this summer.

Bowyer, driver of the No. 14 Stewart-Haas Racing Ford, is the only other driver among the foursome fighting for their Playoff existence with a previous win on a road course. He won in 2012 in Sonoma and has 10 top-10 finishes in 14 starts at the California track. His best finish at Watkins Glen is fourth (in 2012) but he’s only led one lap in 14 starts there.

There is reason to feel optimistic heading to the Charlotte road course however. Bowyer was sixth in the Daytona road course race this year and has finishes of fourth place at Charlotte last year and third place in the inaugural race in 2018 – best among his Playoff rivals this week.

“We know what we have to do Sunday on the ROVAL,” Bowyer said. “We will go there to win. That place is tricky as heck, but it has been good to us the last two years and we need to do it again.”

With one race remaining to determine who advances to the Round of 8 in the NASCAR Xfinity Series Playoffs at a relatively new and particularly challenging venue – the Charlotte Motor Speedway infield road course – Saturday afternoon’s Drive for the Cure 250 has all the makings of a high-drama, high-stakes event.

Eight of the current 12 Playoff drivers will advance to the next three-race round that sets the final four-driver 2020 championship field. Only 20 points currently separate sixth place Ryan Sieg from Ross Chastain, who goes to Charlotte in the final eighth place transfer position.

Briscoe, who won the Playoff opener at Las Vegas, and Chastain’s Kaulig Racing teammate Justin Haley, who won at Talladega last weekend, have earned the automatic bids into the next round. Cindric, the Team Penske driver, is ranked highest among those without a Playoff win.

Chastain, who recently announced he will pilot the famed No. 42 Chip Ganassi Racing Chevrolet next year in the NASCAR Cup Series, holds a tenuous advantage over Burton. None of the four drivers currently below the eighth-place cutoff line have ever won an Xfinity Series road course race.

Seventh place Justin Allgaier – who holds a 12-point edge on Chastain and a 19-point edge on ninth place Burton – has three road course wins – second only to Cindric’s four among the fulltime Xfinity Series drivers. He’s scored top-10s at two of the three previous road course races this season. He’s finished 15th (2018) and fourth (2019) at Charlotte, but has yet to lead a lap there.

Among the four drivers at the bottom of the Playoff standings, Michael Annett has the best average finish (11.3) on the three road courses this season. He was ninth at Indianapolis and 10th at Road America. But the nine-year series veteran finds himself ranked last (12th) among the Playoff contenders heading to the oval after his runner-up finish at Talladega last week was disqualified following a violation in post-race inspection. That cost the driver of the No. 1 JR Motorsports Chevrolet dearly in the standings and now instead of being ninth place, a mere three points behind Chastain, he’s 38 points out of the transfer spot. He will need to win on Saturday.

“To have a runner-up finish taken away in post-race inspection this close to the cutoff race was a tough blow,” Annett acknowledged. “We were in the Playoffs at that point too. That leaves us a lot of work to do this weekend at the ROVAL. (Crew chief) Travis Mack and the No. 1 team have given me fast Pilot J Chevrolets all year long and the key to finishing well in these road course events is to stay on the track.

“We’ll do that and do everything we can to win the race and keep going in the NASCAR Xfinity Series Playoffs.”

NASCAR Xfinity Series
Next Race: Drive for the Cure 250
The Place: Charlotte Motor Speedway Infield Road Course – Concord, NC
The Date: Saturday, October 10
The Time: 3 p.m. ET
TV: NBC, 3:30 p.m. ET
Radio: PRN, SiriusXM NASCAR Radio
Distance: 155.44 miles (67 Laps); Stage 1 (Ends on Lap 20), Stage 2 (Ends on Lap 40), Final Stage (Ends on Lap 67)
What To Watch For: The 2020 season marks the first time the NASCAR Xfinity Series Playoff’s third race has been held at the Charlotte Motor Speedway infield road course. Prior to 2020, the track hosted the second race in the Xfinity postseason for two seasons (2018, 2019) – each of the two races were won by non-Playoff drivers on part-time schedules – Chase Briscoe won the 2018 race and he was 24th in points at the time of the win. Then last season’s race was won by A.J. Allmendinger and he was 39th in points at the time of the win. … The Charlotte road course is the third different track to host the Round of 12 cutoff event in the NASCAR Xfinity Series Playoffs; joining Charlotte Motor Speedway (oval configuration) from 2016-2017 and Dover International Speedway from 2018-2019. … Four different drivers have won the third race in the Xfinity Playoffs – the two winners at Charlotte were non-Playoff drivers, Joey Logano won the 2016 event and Alex Bowman won the 2017 race. At Dover, both winners were Playoff contenders, Christopher Bell was ranked first in the points when he won in 2018 and Cole Custer was second in points when he won in 2019. … In total there have been 77 NASCAR Xfinity Series points races at Charlotte Motor Speedway (includes road course configuration), two races per year since the series started in 1982. A total of 75 races on the oval track and two races on the road course. … Starting on the front row for the Drive for the Cure 250 this weekend will be JR Motorsport’s driver and Playoff contender Noah Gragson on the pole and last Sunday’s Talladega winner Justin Haley on the outside front row.