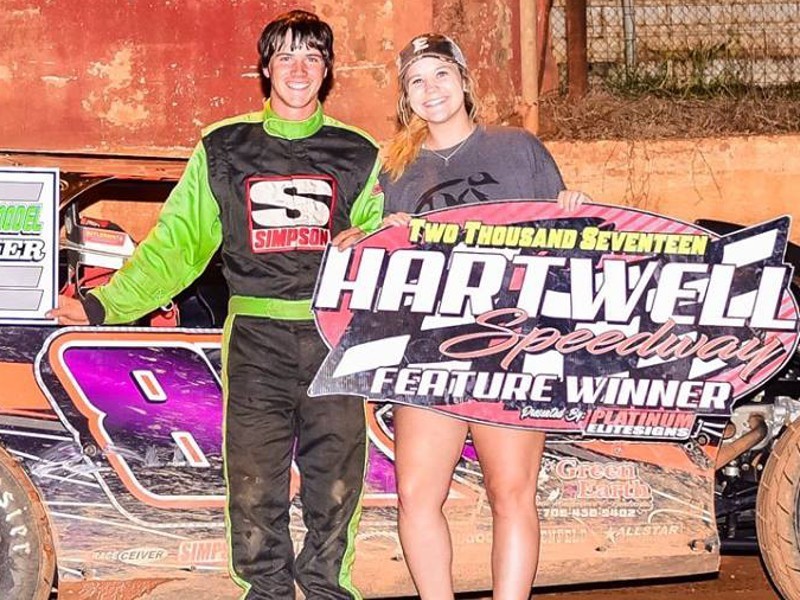 Adam Partain raced to the front of Saturday night’s Limited Late Model feature and went on to score the victory at Georgia’s Hartwell Speedway.

The Hartwell, Georgia native saw the path to victory lane open up on the first lap of the feature around the 3/8-mile clay raceway. Partain was trailing pole sitter Mason Tucker and Brandon Haley as the field fired into the first turn on the drop of the green flag.

When Tucker’s car slid up the track in turn 2 and made contact with Haley’s car, Partain cut square left and bypassed both of them to take the lead.

From there, Partain would hold the point the rest of the way. Behind him, Tucker came under fire from Danny Sanders, as the two battled for second. That fight came to an end when Sanders spun on the frontstretch, ending his night and bringing out the only caution of the race.

On the restart, Tucker tried time and again to find a way around Partain, but Partain held the point each time. A slip by Tucker in turn two allowed Partain to move out to about a six car length advantage, and allowed Haley to get around Tucker for second.

Haley then set his sights on the leader, but was never able to mount a challenge as Partain went on to the win.

Haley edged out Tucker for second, with Chris Woods in fourth and Tim Jones in fifth.

In other action, Shane Yarbrough scored the victory over Cody Pritchett in the Hobby 602 feature. Rod Roberts finished in third, with Mason Tucker in fourth and Gavin Terry in fifth.

Tye Nalley was the winner in the Modified Street feature, with Jennifer Everett in second.

Kyle Braswell scored the victory in the Stock 4 feature, with Jeremy Hicks in second, Jeffrey Lord in third, Aiden Fortson in fourth and Dustin Bales in fifth.

Aaron Calvert took the win in the Open Wheel Modifieds feature. Stanley Hill followed in second, with David Dove in third and Ashley Hogan in fifth.

Logan Gunter came home with the victory in the Young Guns feature. Bryson Lindsey finished in second, with Thomas Shaw in third, Cohen Fortson in fourth and Jonathan Cronic in fifth.