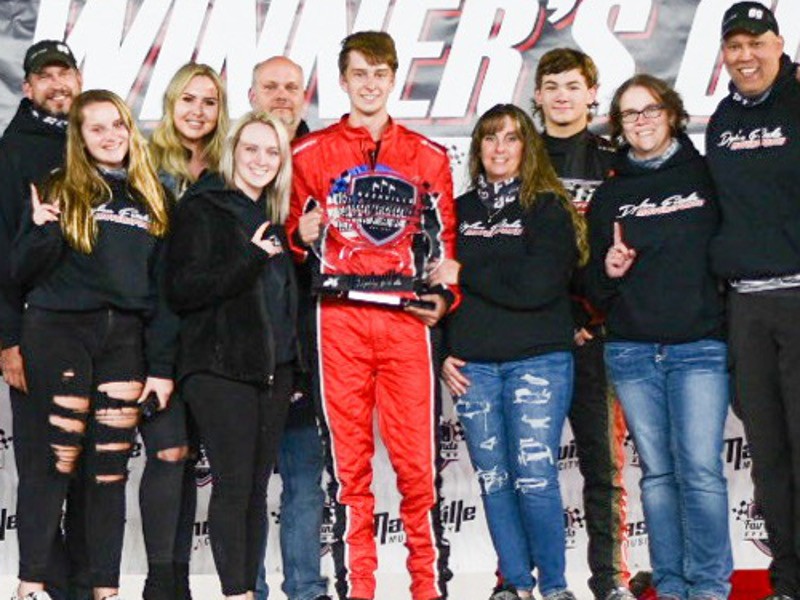 Fetcho, a native of Nashville, took the lead from Cole Williams on the final restart, and went on to record the win at the historic high banked half-mile raceway.

The 100 lap feature ran clean and green for the first 48 laps, with William Hale pacing the field. That came to an end when the first caution flew after Billy Cesco spun into the frontstretch wall.

Hale struggled to get back into a groove on the restart, and was quickly bypassed for the lead by Dylan Fetcho as the race hit the 50-lap mark. Fetcho’s reign at the point didn’t last long, as just a couple of laps later Williams muscled his way to the top spot.

The final caution of the night came with just 16 laps remaining when Davey Coble spun down the backstretch, drawing the yellow flag. Extracurricular activity also removed Kyle Neveau from the event, and the race was halted for cleanup.

On the ensuing restart, both Williams and Fetcho spun their tires. While Fetcho recovered first, Williams hung strong on the outside through turns one and two. By turn three, Fetcho had taken sole possession of the top spot with no intention to relinquishing it. Williams applied plenty of pressure as the laps clicked down, but he would be no match Fetch as he sped to the victory.

In other action on the half-mile layout, John Burns and Tanner Arms were the class of the field in the Whelen Super Trucks feature. Burns scored the victory, with Arms in second. The race was slowed just one when Robert Terry spun in turns one and two due to a flat tire. Terry would recover to finish in third, with Frank Bauer in fourth and Philip Hill in fifth.

In action on the ¼-mile track, NFS played host to the Baby Grand Series sponsored by Oasis Irrigation. Danny Trent, who set fast time earlier in the evening, drove through the field and kept his nose clean for the feature win. Mark Cole finished in second, followed by Jake Trenton in third, Kent Baledge in fourth and Jessie Binkley in fifth.

Kevin Rollins raced to his first Limited Late Model feature victory of the season. Thomas Pannell finished in second, with Jeff Belt in third, Jonathan Dishman in fourth and Dwayne Hudson in fifth.

The 25-lap Pure Stock feature was a battle from the start. Division points leader Phillip McCord found himself in a battle with Jeremy Odle when the two made contact on the frontstretch, leading to retaliation from both drivers. Ultimately, McCord’s night ended with mechanical failure, as did Odle’s a few laps later.

Carl Porter, Jr. topped the Street Stocks field to collect his third win of the year. Larry Cunningham followed in second, with Robert Forsythe in third, Brian Frazier in fourth and Brittany Climer in fifth.

After a couple of opening lap crashes, Travis Owens went on to score the win in the Pest Doctor Front Runners feature. Daniel Harper followed in second, with Jesse Litchford in third, Josh Garvin in fourth and Justin Martin in fifth.

Oliver Cordell held off a charge from Austin Farr and Dylan Fetcho to score his first BH Holmes Construction Legends feature win of the season. Bryson Shaffer and Justin Maxwell rounded out the top five.