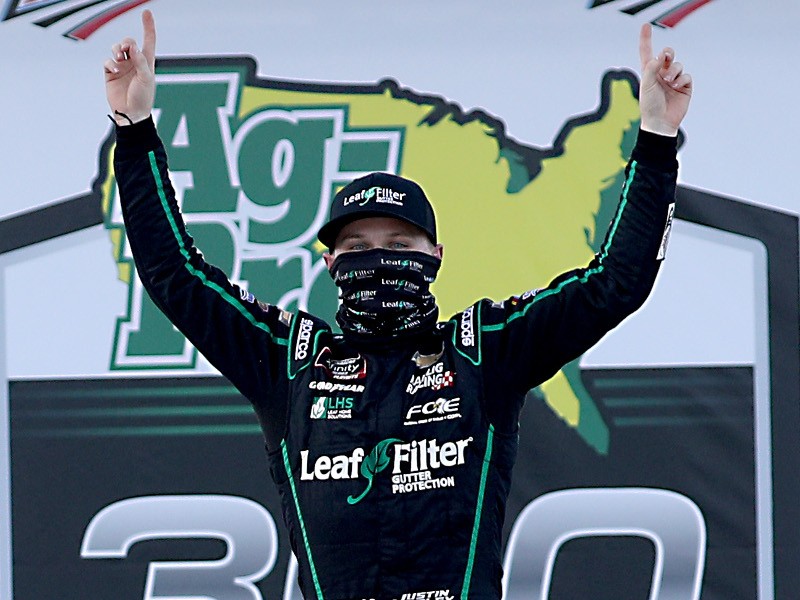 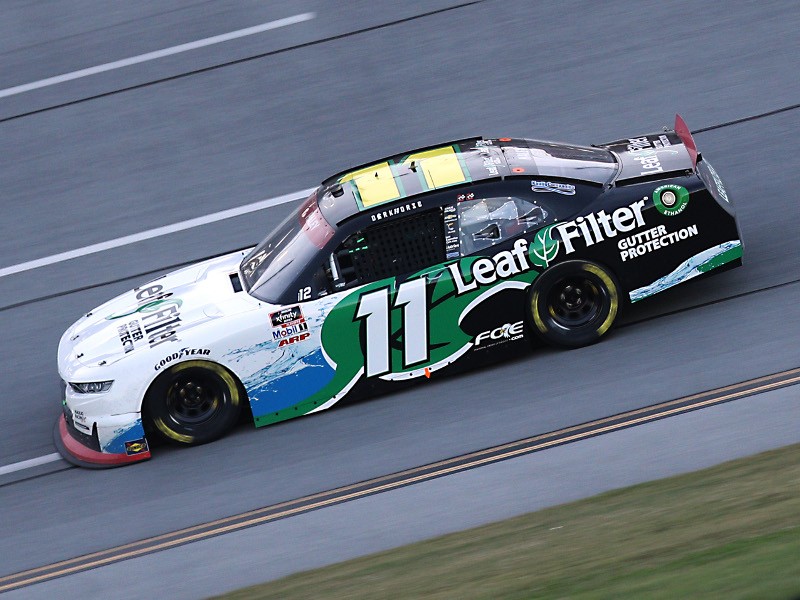 Fortunately, they were the last two laps.

When leaders Chase Briscoe and Noah Gragson tangled coming to two to go, Haley powered his No. 11 Kaulig Racing Chevrolet to the inside of both of them and took the lead. He held it as the field battled behind them on the final lap.

A crash on the backstretch that gathered up several cars brought out the caution and ended the race half a lap early, handing Haley his third career series victory and his second at Talladega.

More importantly, it locks him into the next round of the Playoffs.

“Got this thing in the Round of 8, that’s the most important (thing),” said Haley. “Just super thankful to everyone. This is a blessing.”

Haley had to battle back from a penalty for pitting too early when a group of cars crashed coming to pit road on lap 76. That sent Haley to the back of the field on the ensuing restart, and put him in catch up mode the rest of the day.

“We had that penalty there, and we struggled to get back,” Haley said. “(We were) just bunny hopping. Thankfully Kevin Hamlin, my spotter, was able to guide me through the bunny hops, and be able to go from the bottom. We were so far back with 10 to go.”

As the laps wound down, Haley and his Kaulig Racing teammate, A.J. Allmendinger, began moving their way through the field as the pack ran single file. Over the course of the last 10 laps, the two moved themselves into contention.

But the door opened for Haley when leader Briscoe threw a block on second place Gragson with about three laps to go. The two made contact, slowing them on the outside line and allowing Haley, with a push from Michael Annett, to move up to challenge for the lead.

Briscoe was able to hold his ground on the outside, but more contact from Gragson send Briscoe’s car way high, where he eventually fell back in the field.

That let Haley get away with two laps to go. On the final lap, as the field raced down the backstretch, a four car tangle between Allmendinger, Harrison Burton, Brett Moffitt and Brandon Brown sent cars spinning, gathering up Myatt Snider in the process.

When the caution came out, the race was essentially over, with Haley getting the win.

“I saw A.J. (Allmendinger) go down there with about five to do and I was like ‘man, that might be good’,” Haley said. “Just hopped down there when I got clear and was able to use the draft, and they got split up up top.”

Haley joins Briscoe as the only two drivers locked into the Round of 8 going into the elimination round next weekend at the Charlotte Motor Speedway infield road course.

It was an up and down day for the rest of the Playoff field. For Briscoe, he went from almost scoring his ninth win of the season to a 19th place result in the No. 98 Stewart-Haas Racing Ford.

“Yeah, at the end you are doing everything you can to protect the runs and he (Gragson) is doing everything he can to make moves. It is just part of racing here. It was exciting, at least on my end. I about wrecked two or three times trying to block. It was cool.”

Austin Cindric ran up front most of the day, but his No. 22 Team Penske Ford was turned from behind as several cars came to pit road for a round of green flag pit stops on lap 76. His car was heavily damaged, ending his day with a 34th place finish. While it wasn’t the best result, he still goes to Charlotte all but guaranteed to move to the Round of 8.

“It looked like the whole pack was going to try to stop there and I felt like that was chaos, especially with how far back in the pack we were,” Cindric said. “I just got smoked from behind. I had no chance of making it to pit road. It is really unfortunate. Obviously, we hit the wall a ton.”

Haley’s Kaulig Racing teammate, Ross Chastain, spun on a restart around lap 45 after contact from another car. Chastain’s No. 10 Chevy was then hit hard in the right side door by Colby Howard. Chastain’s crew made repairs, and he was able to finish sixth.

Justin Allgaier looked to have a strong finish going, but his No. 7 JR Motorsports Chevy began smoking after a lap 49 restart. He tried to soldier home to a top 10 result, but his engine gave up the ghost on lap 95, leaving him with a 29th place finish.

The earliest hit came from Riley Herbst, whose No. 18 Toyota was sent sliding into the inside wall after contact off turn 4 from Austin Hill on lap 42. Herbst tried to continue, but eventually had to park his car, leaving him 35th on the day.

Annett was flagged as the second place finisher, but failed to pass post-race tech inspection due to a height issue, and was disqualified.

Going into the cutoff race at Charlotte, with Briscoe and Haley locked into the next round, Cindric, Gragson, Brandon Jones, Ryan Sieg, Allgaier and Chastain are all above the cutline.

With Annett’s disqualification, Sieg was moved to second on Saturday, with Gragson in third, Jones in fourth and Daniel Hemric in fifth.