Game of the Week: Gainesville to make Region 6-7A debut against Forsyth Central 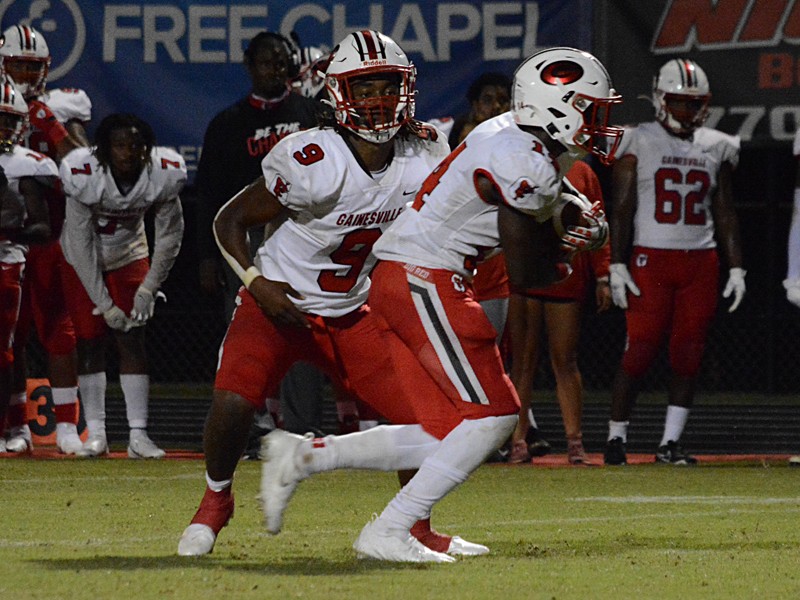 GAINESVILLE – Gainesville coach Heath Webb kind of thought the Red Elephants would end up in the Forsyth County region earlier this year.

Gainesville was the school perched on the grassy knoll, close enough to both counties, but just far enough out of reach to be up for bid. Needless to say, the Red Elephants were excited to find out a region that housed all of Forsyth County’s high schools in Class 7A had an open spot waiting on them.

And that’s where they find themselves this week – the Region 6-7A opener at Forsyth Central.

“When we got the word that we were going to be in Class 7A, we felt like this was the natural region for us to be in,” he said. “We’re just going right across the lake to play these guys, so we’re excited to be at this point.”

(To catch up with other games around the area, click here.)

The Bulldogs shrugged off the first two weeks of the season – cancellations due to COVID-19 related issues -- to settle in pretty quickly after just two games. Last week, they rumbled past Cambridge, 48-14, churning out 244 yards on the ground with six different backs. In the two games, Central has averaged 256 yards on the ground.

The Bulldogs’ early-season success has a lot to do with their well-executed triple-option offense and a defense that’s giving up an average of 10.5 points per game.

Webb was quick to talk about the Bulldogs’ offensive scheme earlier this week.

“I love the way they play the game – it’s wide open,” Webb said. “They play with tremendous effort … just playing the game the way it’s supposed to be played. They’re a triple-option team on offense, so that presents all types of problems and just the fact that we’ve got to be able to play assignment football on defense.”

Forsyth Central coach Frank Hepler says they are just trying to get better each week.

“Having those teams back out on us was tough,” he said. “Gainesville has played their games and has benefitted from that, but we are just trying to get better each week.”

“They do a great job,” Webb said. “The quarterback makes good decisions, he’s the primary ball carrier, and he should be because he’s a tough nut. That’s what makes that whole thing go.”

Although the Red Elephants held Discovery to less than 30 total yards last week, they will have their hands full with Central’s stable of running backs. Peyton Streko stole some of the spotlight with 47 yards on nine carries and three touchdowns in the Cambridge blowout, and Soloman Gates, Patrick Haertel and Eli Ruis all added to the bottom line as well making the Bulldogs rushing attack one to be concerned about.

And on defense, which forced three interceptions last week, will feature Nick Gribbs, Merek Moran and Carson Leak -- the trio will do its best to disrupt the Gainesville offense.

“They play assignment football,” Webb said. “They just fly to the ball. They pursue really well. They’ve got a couple of kids on the defensive line that are as big or bigger than anything we’ve seen. So, they’ve got a good thing going.”

The Red Elephants, on the other hand, have a roster full of weapons. The offense is averaging 39.7 points and 347 yards per game, including two blowout wins over Stockbridge (Week 1) and Discovery (Week 4) and are 2-1 heading into the game on Friday.

“Offensively, we’ve got to match their intensity,” Webb said. “They play so hard on defense that we’ve got to play as hard as they want to play.”

Gionni Williams, who knows how to match his opponent’s intensity, has completed 30 of his 51 passes for 379 yards and five TDs and rushed 31 times for 225 yards and three TDs. Meanwhile, sophomore running back Naim Cheeks has churned out 362 yards on 47 carries and five TDs, including a season-high 184 yards against Stockbridge in the opener. Not to be forgotten is the offensive line, with Cedrick Nicely, Michael Gosa, Ignacio Olvera, Dorean Whitehead and Elijah Ruiz giving the Red Elephants the massive push in the trenches.

“They have good athletes, are coached well and have a great tradition,” Hepler said. “We have to be perfect and not make any mistakes, play hard, give a great effort and hope that we can play our best.”

Defensively, linebackers Yusif Ali, Quamaine Rucker and Stacy Hopkins and defensive linemen Lemuel Gayle, Khaliq Maddox, Clayton Louis and Qua Coley will be counted on to sniff out the misdirection of the Bulldogs’ triple-option.

“Again, assignment football on defense, that’s the deal with the triple-option,” Webb said.