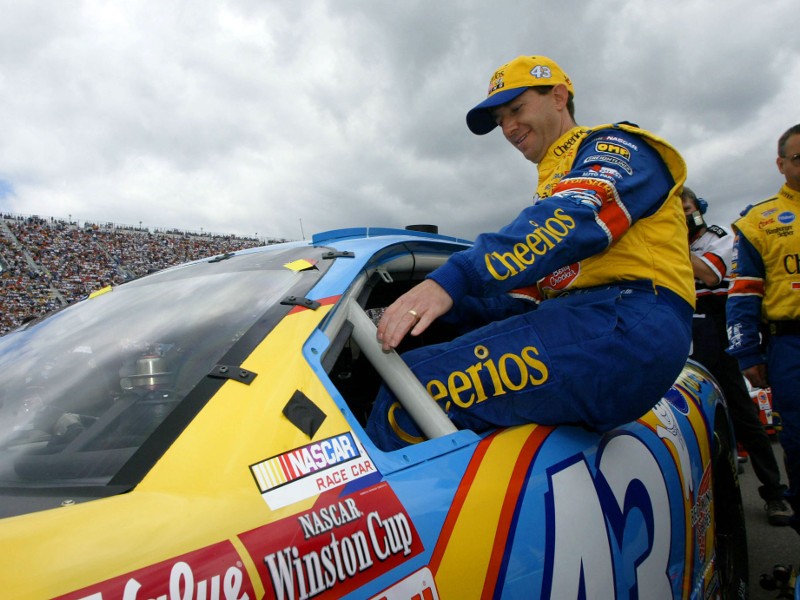 John Andretti climbs behind the wheel of the No. 43 Petty Enterprises Dodge. The veteran racer passed away on Thursday after a battle with cancer.
Photo: Tom Pidgeon/Getty Images
Contact Editor

Veteran race car driver John Andretti passed away on Thursday at the age of 56.

Andretti, the nephew of Indianapolis 500 winner Mario Andretti, was diagnosed in 2017 with colon cancer. The disease was later found to have spread to his liver.

Andretti Autosport, the IndyCar team owned by his cousin Michael Andretti, made the announcement on Thursday afternoon.

“When first diagnosed with colon cancer in 2017, John vowed to fight back and use his voice to help spread the word of prevention and early detection,” the team said in a statement on Twitter. “He fought hard and stole back days the disease vowed to take away. He helped countless others undergo proper screening and in doing so, saved lives.

We will forever carry with us John’s genuine spirit of helping others first and himself second. Our prayers today are with Nancy, Jarrett, Olivia and Amelia, with our entire family, and with fans worldwide. We urge all our followers to, please, #CheckIt4Andretti.”

While much of the Andretti family racing legacy centered around the open wheel IndyCar circuit, John Andretti competed and was successful in a number of racing disciplines.

He competed for eight years on the CART Series, scoring a victory in 1991 on the Surfers Paradise Street Circuit in Queensland, Australia.

Andretti would make a total of 12 starts in the Indianapolis 500, with his best finish, a fifth, coming in 1991. His final start in the event came in 2011 in a car co-owned by his former NASCAR team owner Richard Petty.

In 1989, he scored one of the biggest prizes in endurance races, as he was a member of the team that scored the overall win in the Rolex 24 at Daytona International Speedway. He would win three other events in IMSA competition over the years.

The versatile driver even tried his hand at drag racing in the NHRA Mello Yello Drag Racing Series, as he competed in a Top Fuel Dragster for car owner Jack Clark in the Southern Nationals at Atlanta Dragway in Commerce, Georgia in 1993. With sponsorship from Taco Bell, Andretti beat out 1992 division champ Joe Amato in Round 1, and then edged out Tommy Johnson, Jr. in Round 2. Andretti would lose to Mike Dunn in the semi-finals. It was his first and last time in an NHRA Top Fuel Dragster.

Andretti may be best known for his time in NASCAR. He made his first start in the NASCAR Cup Series in 1993. He made history in 1994 when he became the first driver in history to compete in both the Indianapolis 500 and the Coca-Cola 600 at Charlotte Motor Speedway on the same day. After a 10th place result at Indy, Andretti flew to Charlotte, where mechanical issues left him 36th on the day.

Andretti competed for 17 years on NASCAR’s top circuit, scoring two wins along the way. His first came in 1997 in the July race at Daytona International Speedway driving for NASCAR Hall of Famer Cale Yarborough.

He was possibly best known as the driver of the No. 43 for the famed Petty Enterprises team, owned by NASCAR Hall of Famer Richard Petty. After a brief stint for the team in 1994, Andretti returned to the team full time in 1998, and would be the main driver for the team until 2003.

The biggest moment for the Andretti/Petty pairing came in April of 1999, when Andretti outdueled Jeff Gordon and Jeff Burton after making a two tire stop late to score the win at Martinsville Speedway. Andretti would drive the No. 43 into victory lane with Petty sitting on the door of the car.

The win came as Petty Enterprises celebrated its 50th anniversary, and came a day after the team scored a NASCAR Truck Series win with Jimmy Hensley at Martinsville, giving them a sweep of the race weekend.

“Our hearts go out to Nancy and the entire Andretti family in their time of sorrow,” said Richard Petty in a statement on Twitter. “The Petty family is thankful to have shared memories with John Andretti. On two separate occasions John was a driver for Petty Enterprises. He brought a win to the team in 1999 at the Martinsville Speedway.

“Our family will not be the same without John.”

“God Speed John Andretti. My heart is heavy with overwhelming sadness,” said former Petty Enterprises teammate Kyle Petty on Twitter. “I know his last name was Andretti, but for our family it was always Petty. All my thoughts, prayers and love go out to the entire Andretti Family.”

Andretti made his final start in a NASCAR stock car in 2010 at the Daytona 500.

“John Andretti embodied the spirit of a champion and inspired an entire fan base through his courageous battle with cancer,” said NASCAR President Steve Phelps in a release on Twitter. “He was a fierce competitor throughout his life, and we are saddened by his passing. The entire NASCAR family extends its deepest condolences and prayers to John’s family.”

“John Andretti’s skills behind the wheel of any kind of race car were admired by his millions of fans around the world, and he always returned that loyalty and kindness to become one of the most popular drivers of his generation, said Penske Entertainment Corp. President & CEO Mark Miles, on behalf of INDYCAR and the Indianapolis Motor Speedway in a statement. “But John’s true mission was helping others, whether through his countless hours of charity work, especially with Riley Children’s Hospital here in Indianapolis, or by the colon screening campaign he started in April 2017 after he was diagnosed with cancer. John’s positive attitude and selflessness throughout his brave fight inspired all of us and will be a legacy that will continue forever. We extend our deepest condolences to his wife, Nancy, their three children and the entire Andretti family.”

“We are devastated by the news that our dear friend, John Andretti, has passed away,” said IMSA President John Doonan in a statement. “John was an extremely talented IMSA racer, as his 1989 Rolex 24 victory and three other victories will attest. But he was one of the most versatile racers ever, winning races in IndyCar and NASCAR and reaching the pinnacle of top fuel drag racing as well. Our thoughts and prayers are with John’s family, friends and many colleagues, and he will be missed by many throughout our motorsports community.”