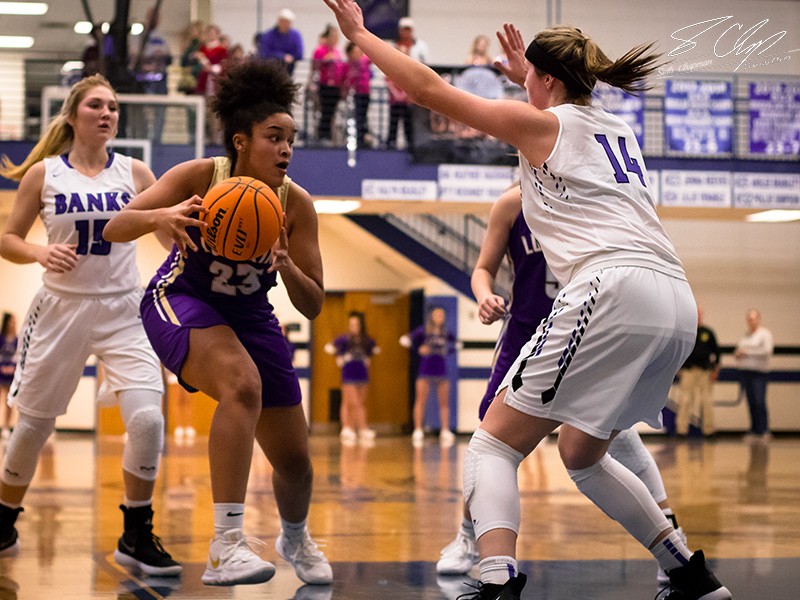 DAHLONEGA — If anything was learned by the Lumpkin County girls’ impressive 51-36 win over Class 3A sixth-ranked North Hall Tuesday night, it’s that the Region 7-3A tournament is going to be one wail of a showdown.

“I don’t think there is a real front-runner,” Lumpkin County coach David Dowse said. “We started slow but I thought we really picked things up in the third quarter. It’s going to be the best tournament in the state and really I think all seven teams have a chance.”

North Hall came into the game sitting in second place with a chance to still grab the No. 1 seed. The Lady Indians, who closed out their regular season on Tuesday, were and probably still are fifth. Now, coupled with Dawson County’s loss to last place Cherokee Bluff on Tuesday, North Hall is locked in at No. 2 with Dawson County and Fannin County now tied for third.

Freshmen Lexi Pierce and Kate Jackson headed the call. Pierce poured in 16 points and Jackson had 15 as the Lady Trojans focused on Davenport and Makenzie Caldwell.

“The girls really stepped up. We challenged them at halftime to get things going and the whole group really played well,” Dowse said. “Isabel does so many things that even if she isn’t scoring she’s getting the others involved.”

The struggles for both Davenport and Hollifield were easily explained as it was also a battle of the top two defensive teams in the region. And it was a slog for both offenses early as they finished the first quarter tied at 8.

Lumpkin County jumped out to a 12-8 lead moments into the second quarter on a basket by Pierce. But the Lady Trojans clamped down and closed out the half with a 13-4 run, capped by a Hollifield 3-pointer at the buzzer -- her only points of the half -- for a 21-16 lead.

North Hall pushed its lead to 23-16 on a jumper from Ansley Smallwood to open the third quarter and led 27-22 on a Smallwood 3-pointer with 5:10 left in the period. But the Lady Indians offense woke up.

A 3-pointer from Caldwell ignited a 13-0 run with Jackson dropping in a pair of baskets and senior Madisyn Echols finishing it as they eventually took a 36-28 lead into the fourth quarter.

A 3-pointer by Pierce opened the final period and a Jackson 3-pointer capped a 10-3 run as the Lady Indians blew the game open for a 46-31 advantage. North Hall never recovered.

“(North Hall) is a good team and can really score,” Dowse said. “It’s all about matchups in the tournament so I don’t know if this means a whole lot other than we’re playing pretty good right now.”

Swanson paced North Hall with 11 points. Rylee McCall finished with 9 points on three 3-pointers but had none in the second half for the Lady Trojans. Smallwood had 7 points.

The Trojans snapped a two-game losing streak with a crucial road win in Region 7-3A action.

North Hall (16-4, 7-4 Region 7-3A) led from nearly the opening tip in a game that helped keep the Trojans in the fourth spot with one game left in the regular season.

But the Indians could not get any closer as North Hall used an 8-2 run to put the game out of reach at 56-38 with less than two minutes left.

“I thought we played well at times but we also let get back in the game a couple of times,” North Hall coach Tyler Sanders said. “Now we’re going to just try to get ready for a really good Cherokee Bluff team. That’s going to be a big game for us heading into the (region) tournament.”

Clark Howell paced North Hall with 16 points. Samir Huerte added 15 points and Cole Ellis had 9 for the Trojans. J.T. Fair, who was expected to be a key piece for North Hall before the season began, played in his first game of the season after undergoing ankle surgery following the football season.