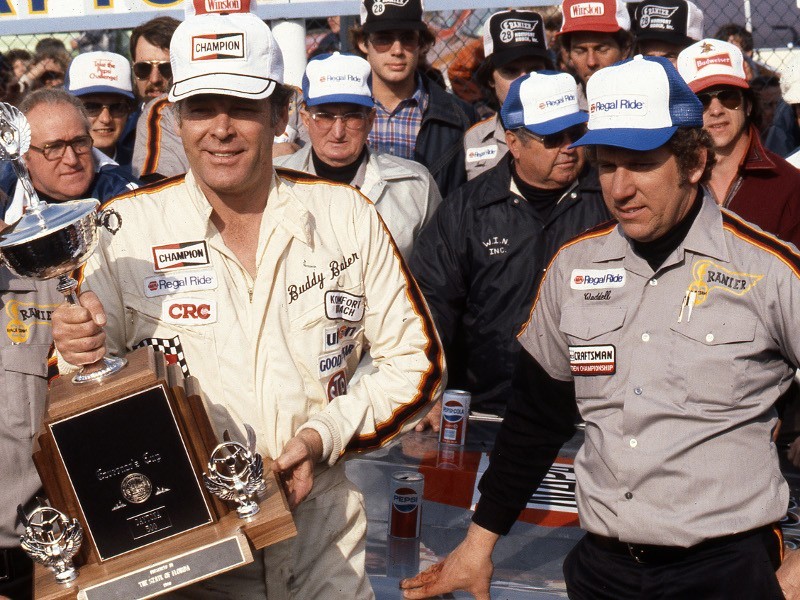 Waddell Wilson (right) and Buddy Baker (left) celebrate after winning the 1980 Daytona 500. Both men will be inducted as members of the 2020 NASCAR Hall of Fame on Friday.
Photo: Courtesy ISC Images & Archives via Getty Images
Contact Editor

Listening to Waddell Wilson share cherished stories about his NASCAR career – his humble start and his most celebrated moments – it all sounds like pages from a NASCAR Hall of Fame novel or movie script. But this is real life from a bona fide legend. And he is now a NASCAR Hall of Famer.

Raised on a farm in rural Bakersville, North Carolina, Wilson started his career at the legendary Holman-Moody engine shop as a young man after working briefly as a diesel mechanic. He finished his career as one of the most acclaimed crew chief and mechanical minds in the sport – earning three Daytona 500 victories.

This week, Wilson, 83, will become only the fourth crew chief formalized into the NASCAR Hall of Fame. He joins drivers Buddy Baker, Bobby Labonte and Tony Stewart and team owner Joe Gibbs in the esteemed 2020 NASCAR Hall of Fame class.

“It never crossed my mind I would receive anything like this and I was okay with that,’’ Wilson said of his NASCAR Hall of Fame nod. “I never did things for the spotlight. But to get this, this is an unbelievable honor. It’s something I never thought about, but it is so big for my family and I. Just unreal.’’

For Wilson and so many of the sport’s early crew chiefs, understanding race cars was a self-taught trade with a lot of hard knock lessons. But word got around pretty quickly that Wilson was an exceptional talent.

“I guess the main thing was I was a perfectionist and wanted everything as perfect as I could make it,’’ Wilson said. “I was raised on a farm and my grandfather was like that and he taught me to be like that.’

Wilson’s days at Holman Moody were akin to racing’s version of a Harvard education back “in the day,” as they say.

The next year Wilson got a second shot and was Baker’s crew chief at the 1980 Daytona 500. The two won that race from pole position and it remains, understandably, one of the greatest afternoons of Wilson’s life. His genuine love of the sport is evident when he re-tells stories like these. Asked if he had just one memory that stands out in his storied career and Wilson conceded, that would be impossible.

But winning his first race as crew chief – in the sport’s biggest race – seems certainly among Wilson’s most cherished times in the sport.

He remembers all the small details – like, for example, that there were only three people working in the Harry Rainer team shop during the offseason leading into the 500. That means a lot of work for the small group and Wilson’s first big project was getting the body of the car ready. He sent it off to a local body shop with some specific instructions on contouring it.

“And the thing about it was, they were not doing it right and I should have never paid the bill. You could have bought four or five race cars for that kind of money back then. So it really ruined my week when we went to Daytona.

The hood of that No. 28 was painted with bright Day-Glo colors, Wilson recalled. “Because we’d be coming up so fast on drivers they wouldn’t see us coming.’’

He remembers specifically, Baker coming into the pits during a caution in the waning laps. Wilson calmly leaned all the way in the window and told the veteran Baker to have patience – the team was going to do a quick fuel-only stop but Baker, in position to score his first Daytona 500 victory, reminded his friend, “I’ve been patient for 19 years.’’

The team’s biggest competition that afternoon, Bobby Allison, pitted at the same time to get two tires and fuel. The fast stop put Baker back out front. Then a caution came out with two laps to go with Baker leading. The race finished under yellow and Baker and Wilson got to hoist their first Daytona 500 trophy.

The pair’s efforts resulted in Baker leading a race-best 143 of the 200 laps and that engine that Wilson fine-tuned provided an average race speed of 177.602 mph – a Daytona 500 record to this day.

“We get in victory lane and (team owner) Harry Rainier was in there with me and one of the NASCAR officials walked over and said, ‘You guys set a record and you’ve won $103,000.’

It would be the first of three Daytona 500 trophies for Wilson as a crew chief. He led another NASCAR Hall of Famer driver Cale Yarborough to back-to-back Daytona 500 wins in 1983 and 1984.

In all, Wilson earned 22 wins as a crew chief spread over 14 seasons. In 1981, he set a personal season-high mark leading Bobby Allison to five race victories.

During his career, he served as crew chief on cars driven by Hall of Famers such as Baker, Yarborough, Darrell Waltrip (1987), and Ricky Rudd (1990-91). His last victory as crew chef came at the legendary Darlington Raceway with Rudd in 1991.

He served as crew chief for Indy 500 champion Al Unser, Jr.’s 1993 Daytona 500 start and he closed out his crew chief career working with Ricky Craven for the first five races of 1995.

Wilson’s drivers combined to win 32 pole positions – the first in Wilson’s Cup debut as crew chief in 1979 and the last with Rudd at Sonoma in 1991.

“Waddell could do anything,’’ said NASCAR Hall of Famer, three-time Cup champion Darrell Waltrip. “He was an engine builder first. He could be the crew chief, he could be the team manager, he just understood the sport.

“He and (fellow NASCAR Hall of Famer) Robert Yates and a bunch of those guys learned under Holman-Moody, so they learned how to do everything. They were generalists, not really specialists. Although they had areas they could specialize in, there were other things they could do just as well.

“I think when you have a racing mentality and a high IQ like a lot of those guys do, you know what it takes to be successful with people and equipment and also how to call a race. There’s not that many people like that around anymore, the people that can do it all.’’