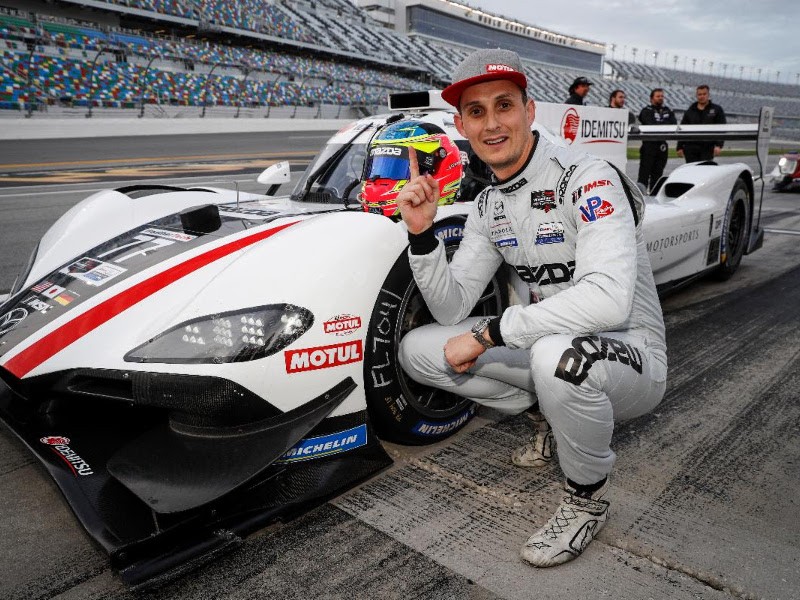 DAYTONA BEACH, Fla. –  A year ago, Oliver Jarvis broke a 36-year-old record on the 3.56-mile Daytona International Speedway circuit to win the Motul Pole Award for the Rolex 24 At Daytona.

Jarvis didn’t quite break his own track record of one minute, 33.685 seconds on Thursday afternoon in qualifying for the 58th Rolex 24 At Daytona. But he did win his second consecutive Motul Pole Award in the No. 77 Mazda Team Joest RT-24P Daytona Prototype international (DPi) machine and once again will roll off the grid at the head of the field on Saturday afternoon when the twice-around-the-clock classic gets under way at 1:30 p.m. ET.

Jarvis posted a best lap of 1:33.711 (136.760 mph) eight minutes into what was supposed to be a 15-minute qualifying session to take the provisional pole. Four minutes later, with Jarvis still holding the top spot, Ricky Taylor spun and crashed the No. 7 Acura Team Penske ARX-05 DPi machine in the bus stop.

The checkered flag wave shortly thereafter Taylor’s incident, with Jarvis on the pole for the second straight year. It was the British driver’s fourth career IMSA pole.

“What a car (the team) just gave me,” said Jarvis, who is co-driving the No. 77 with Tristan Nunez and Olivier Pla. “I cannot say ‘Thank you’ enough. This year feels different. This year feels business-like. Last year, there was a huge amount of emotion. It was the first time. This year, it feels like we came in to do a job and this is just a small part of what we want to achieve this weekend.”

Jarvis will share the front row with reigning WeatherTech Championship DPi champion Juan Pablo Montoya in the No. 6 Acura Team Penske ARX-05. Montoya – a three-time overall Rolex 24 winner – posted a best lap of 1:34.154 in the car he is sharing with his 2019 DPi co-champion, Dane Cameron, and 2019 Indy 500 winner Simon Pagenaud.

Third on the grid went to Jonathan Bomarito in the other Mazda Team Joest entry. Bomarito turned in a best time of 1:34.169 (136.095 mph) in the No. 55 DPi that he is co-driving this weekend with Harry Tincknell and 2014 Indy 500 winner Ryan Hunter-Reay.

He’s pulling double duty this weekend, driving in both the LMP2 class in the No. 52 machine and the GT Daytona (GTD) class in the No. 74 Riley Motorsports Mercedes-AMG GT3. Keating will have to complete at least four-and-a-half hours in each car and can’t drive more than four hours in any six-hour period.

Keating, who is sharing the No. 52 with Nick Boulle, Gabriel Aubry and Simon Trummer and the No. 74 with Gar Robinson, Lawson Aschenbach and Felipe Fraga, was pleased to earn the Motul Pole Award. He also believes the starting position offers significant benefits.

“I don’t feel like qualifying is a huge deal in a 24-hour race like this, but for the P2 class, it does give a big advantage,” Keating said. “At the beginning of the race, the GTLM cars are right behind us. They’re a little bit heavier and they get heat in their tires and warm up a little bit quicker. I feel like it’s one of their main objectives to pass as many of the P2 cars to separate themselves from the cars behind them.

“Being in front of the P2 class will give me a little bit more room to warm up my tires and get going. I’m very excited about it.”

Henrik Hedman qualified second at 1:37.728 (131.139 mph) in the No. 81 ORECA for the DragonSpeed USA team, which won the LMP2 class in last year’s Rolex 24. Hedman’s co-drivers this weekend are Ben Hanley, Colin Braun and Harrison Newey.

John Farano will start third in the LMP2 class after a best qualifying lap of 1:39.275 (129.095 mph) in the No. 8 Tower Motorsport by Starworks ORECA. He’ll go into battle this weekend with a trio of co-drivers that all have won at least one 24 Hours of Le Mans – Ryan Dalziel, David Heinemeier Hansson and Nicolas Lapierre. Dalziel also scored an overall Rolex 24 victory back in 2010.

In track record pace, Nick Tandy put the No. 911 Porsche 911 RSR-19 on the IMSA WeatherTech SportsCar Championship GT Le Mans (GTLM) pole for the 58th running of the Rolex 24 At Daytona.

“It’s a great start to the year in our defense of the championship,” Tandy said. “I’ve got some new teammates this year, so it’s great to share it with those guys.

The new partnership between Pfaff Motorsports and Motul could not be off to a better start.

Motul, already the “Official Motor Oil” of IMSA, struck up a partnership with the Canadian-based team in December following its first season in IMSA’s top-tier series.

Behind the wheel of the “Plaid Porsche” was Zacharie Robichon, whose time of one minute, 45.237 seconds (121.798 MPH), bested the previous track record by .02 seconds set in 2019 by Marco Gomes. The last time Porsche swept both GT pole positions was at VIRginia International Raceway in 2019, with both Tandy and Robichon the successors again in their respective classes.

“Last year, we had a couple of pole positions and that was the beginning of the relationship with Motul,” said Robichon. “As our first official race with them, it was nice to embrace it this way. I think there’s no better way to get the relationship started, but obviously it’s just the beginning and we’re looking forward to everything that comes next.”

The car had been quick all day at the World Center of Racing on Thursday, with the No. 9 Porsche second on the charts in both of the day’s two practice sessions. Robichon will be co-driving in this weekend’s twice-around-the-clock event with Dennis Olsen, Lars Kern and Patrick Pilet.

“It ended up being quite popular last year, so we decided to take it a step further this year and do the suits,” said Robichon. To me, it feels natural. This is basically what I wear at home most of the time. I fit right in. We get a couple looks but I think most people are used to it by now. The first time we wore it, we did get a couple people looking at us sideways, but we cherish it and at least it gets people talking.”

NASCAR Cup Series Champion Kyle Busch, with teammates Parker Chase, Jack Hawksworth and Michael De Quesada, will start 36th overall on Saturday and 16th in the GTD class after the team opted to not take the car out for qualifying after an engine change.

The Rolex 24 At Daytona gets underway on Saturday, Jan. 25, on the 3.56-mile road course at Daytona International Speedway.