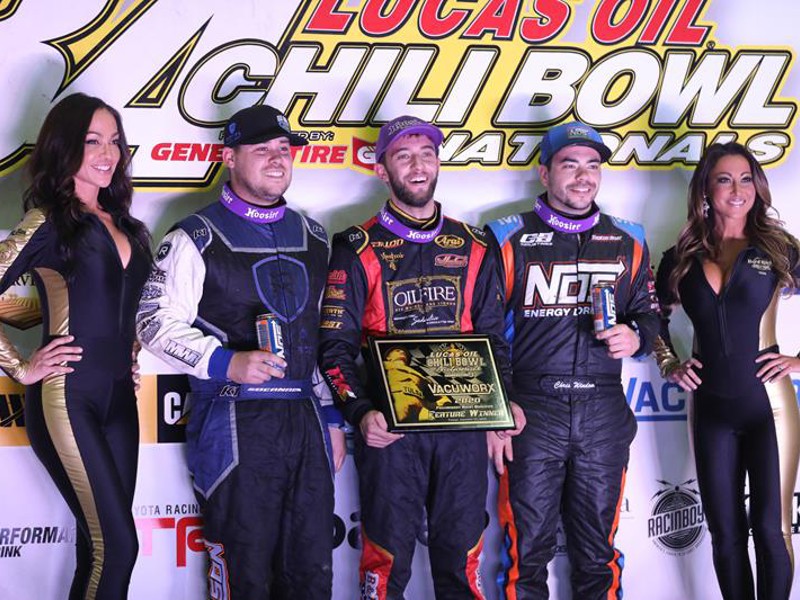 Making the win sweeter for Thorson is the fact that 10 months ago, the outlook on his career was grim following a crash that nearly ended it.

“This means a lot. I didn’t know if I was ever going to be able to race again,” he said. “My parents didn’t tell me until about two months after the fact that on one of my last appointments that the surgeon said I may never be able to use my left arm again. It was definitely one of the hardest times of my life and hopefully I don’ have to do anything harder.”

Chris Windom took the lead from the pole, while Ricky Stenhouse, Jr. battled Tucker Klaasmeyer for second. Klassmeyer took the position before the caution flew.

Racing for the lead on the restart, Stenhouse, overtook Windom off the second turn on lap 4, but would see his advantage go away when the caution flew again on lap 7.

Back under green, Stenhouse led Thorson, who mounted several challenges over the next few laps. Thorson would take advantage of a slip by Stenhouse on lap 15, but saw it negated when a pair of cars tangled, bringing out another caution.

Stenhouse would regain the lead on the restart, but saw his night go south when he slammed the wall in the turn three. That moved Thorson to the point, with Windom and Klassmeyer in tow.

Thorson and Windom would swap the lead several times over the following laps, almost tangling at one point on lap 20, which opened the door for Ryuan Bernal to take the lead. A caution with 10 laps to go settled the battle after Andrew Laysner took a tumble.

Back under green, Thorson took the lead on lap 25, with Windom making it a three-car battle on the final lap. Fighting around a lapped car, the run to the win came down to the final turn Thorson running the high side to the line, edging Bernal by 0.166 second margin.

Windom ended up third with Klaasmeyer fourth and Justin Allgaier in fifth.