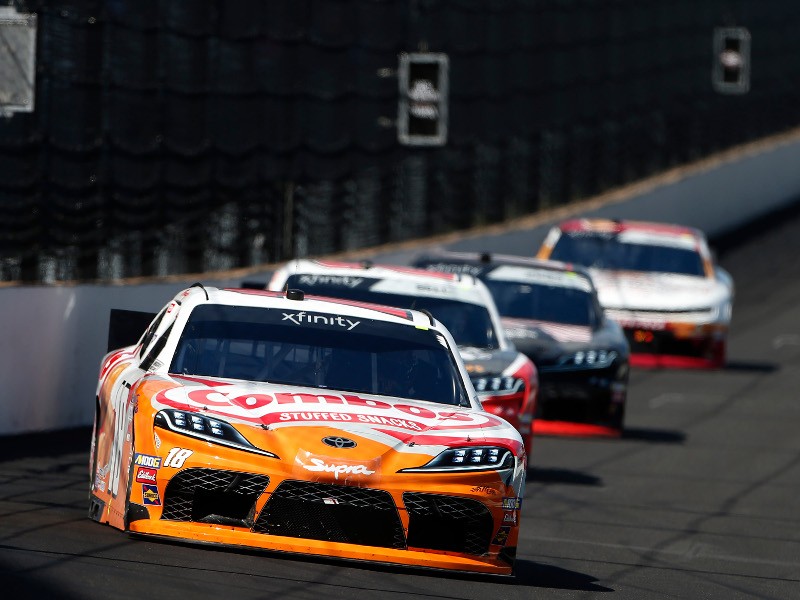 Kyle Busch leads a pack of cars during the NASCAR Xfinity Series race at Indianapolis Motor Speedway on September 7, 2019. It was announced on Wednesday that the series will compete on the IMS infield road course in 2020.
Photo: Brian Lawdermilk/Getty Images
Contact Editor

The Indianapolis Motor Speedway announced Wednesday that the summer NASCAR Xfinity Series race there will be held for first the time on the facility’s infield road course, a day prior to the annual Brickyard 400 which will continue to be contested on the historic 2.5-mile oval.

NASCAR executive Ben Kennedy sat alongside track owner Roger Penske – whose acquisition of the historic speedway was made official earlier this month – in announcing the new-look Indianapolis NASCAR Weekend.

“I can’t think of a race in NASCAR history when a track ran a road course and oval back-to-back,’’ Kennedy said of the Indy plans.

Boles shared that the impetus behind the change was to make the NASCAR Fourth of July race weekend as special and celebratory as the national holiday timing it shares. The Indy weekend will also include concerts, a fireworks show and, for the first time, there will be infield camping inside the famed course.

“It’s something we want our fans to look at this and see if it’s something they want, so we can grow this in the future and certainly it can put on some good racing,’’ Penske said, making what is his first major announcement since officially acquiring the historic Speedway on January 6.

“Guess what? The 500 was the 500 for I don’t know how many decades and once the decision was made to bring NASCAR in, we felt we wanted to take it to the next level,’’ Penske continued. “We’ve had some great racing here on the Brickyard weekend but we think with the concerts, the road course racing on Saturday and the oval on Sunday will make a big difference for our fans and certainly for our TV partners.’’

Kennedy said the sanctioning body had been contemplating running the Indianapolis road course for “a while.’’

“It’s an exciting announcement for us in NASCAR,’’ Kennedy said acknowledging that road course racing “is some of our best racing.”

It has historically been a fan favorite as well, Kennedy said, especially in the Xfinity Series which will have five road course events on its 2020 schedule – at Mid-Ohio, Road America, Watkins Glen, the Charlotte Motor Speedway infield road course and now Indianapolis.