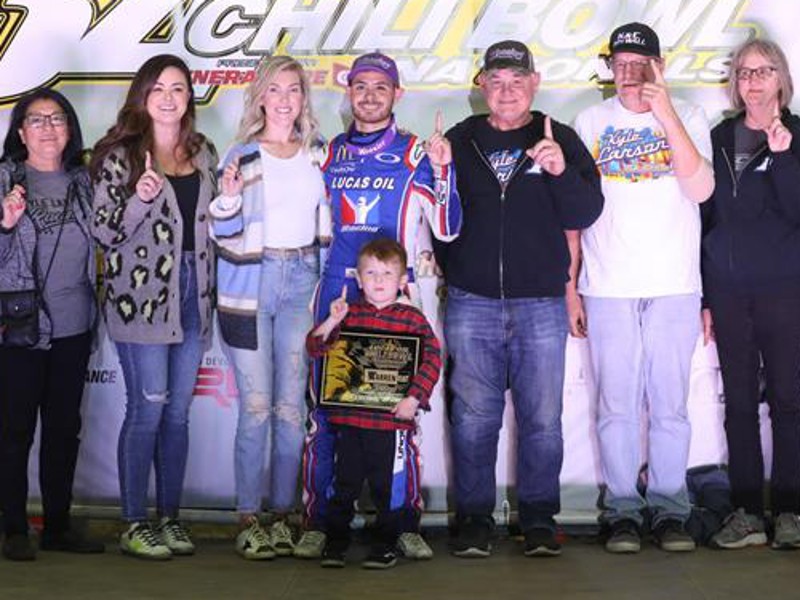 Locking into his ninth championship A-Feature since 2010, the race to that ticket became a question of fuel.

“I think me and Jonathan (Beason) both were running out of fuel there at the end,” explained Larson. “Mine was stumbling a lot the last five laps, so I was thankful we didn’t have another caution because I don’t know if I could have made it.”

Larson charged to the early lead, using the high line around Tulsa Expo Raceway. After the early action was broken up when Derek Hagar’s car slowed in turn three, Larson powered away again on the restart.

Larson led the field by over three seconds before the caution flew again for a spin by Jeremy Webb in turn three. The field would be slowed two more times as the race reached lap 10, with Larson continuing to pace the event.

As the leaders raced in slower traffic on lap 21, Beason was able to challenged Larson for the lead, but Larson used the lap traffic to his advantage to hold the top spot. The caution flew again with six laps to go when Jake Bubak flipped his car while fighting for the third position.

Back under green, Larson picked up right where he left off, and went on to score the win by a 2.822 second advantage. Beason finished in second, with Michael Faccinto in third, Dillon Welch in fourth and Larry Wight in fifth.

Also on the night, NASCAR Cup Series 2020 Rookie of the Year contender Christopher Bell charged from seventh in the closing laps to score the VIROC victory.

Mired mid-pack early on, cautions around the race’s mid-point provided the springboard for Bell to begin making moves.