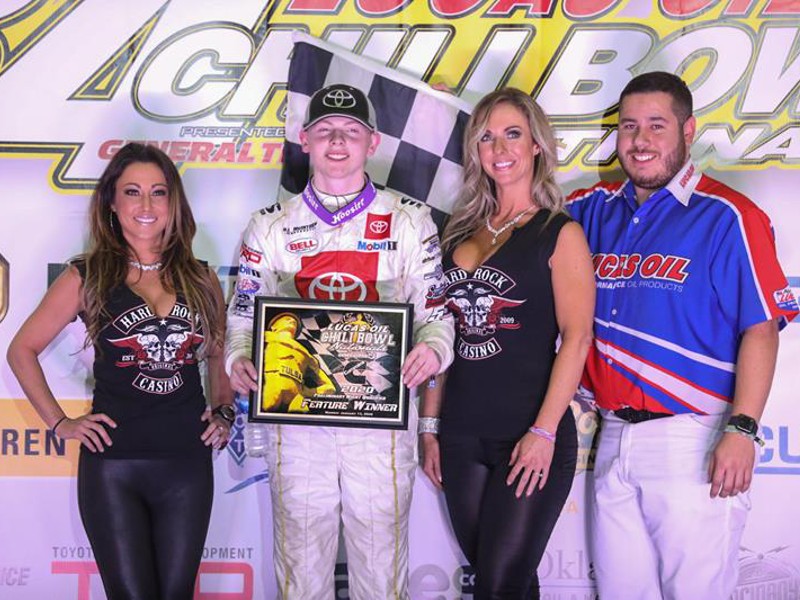 TULSA, Okla. - Debuting with Keith Kunz Motorsports, Oklahoma’s Cannon McIntosh squashed all doubts of his worth on Monday night.

“I’ve been looking for a win for a long time now. We’ve had lots of close calls but coming not Keith’s stuff, I put a lot of pressure on myself, “said McIntosh. “Those guys did good taking the pressure off of me a little bit and helping me stay calm. Coming into this race, I really just wanted to be able to make the main event. There’s a lot of people that would love to do that. I never thought we’d be in Victory Lane tonight.”

Bolting into the lead as Aaron Reutzel and Tyler Courtney battled for second, the pair allowed Cannon to get clear by several car lengths. Using the high line, Aaron worked past McIntosh on lap 5. Immediately adjusting his line, Cannon stayed within a few car lengths as the pair worked into traffic on lap 10.

Lap 11 spelled disaster for Reutzel as Shane Golobic slid into Ryan Leavitt just as the leader was coming up to put the pair a lap down. Sending Globic’s car flipping, Reutzel had nowhere to run as the car landed on top of his.

McIntosh moved back to the point and moved away from Courtney, but the caution came out again.

Restarting with 11 laps complete, Courtney battled with Michael Pickens, with Courtney able to answer every attempt. Allowing McIntosh to open his advantage to 1.581 seconds, the caution came out again on lap 14.

The caution flew again on lap 22 when Brady Bacon came to a stop in turns one and two, and the restart saw Trey Marcham flipping wildly into the fence after contact with Aaron Reutzel. After an open red to repair the chain link, the race resumed with Courtney and Pickens both setting sights on the lead.

McIntosh maintained point with his advantage 0.708 seconds over Tyler Courtney with both locking into Saturday’s championship event. Able to keep rolling after the crash with Marcham, Aaron Reutzel changed to the final podium step. Michael Pickens crossed fourth with Zach Daum finishing fifth.