Voters show up to see new machines in action 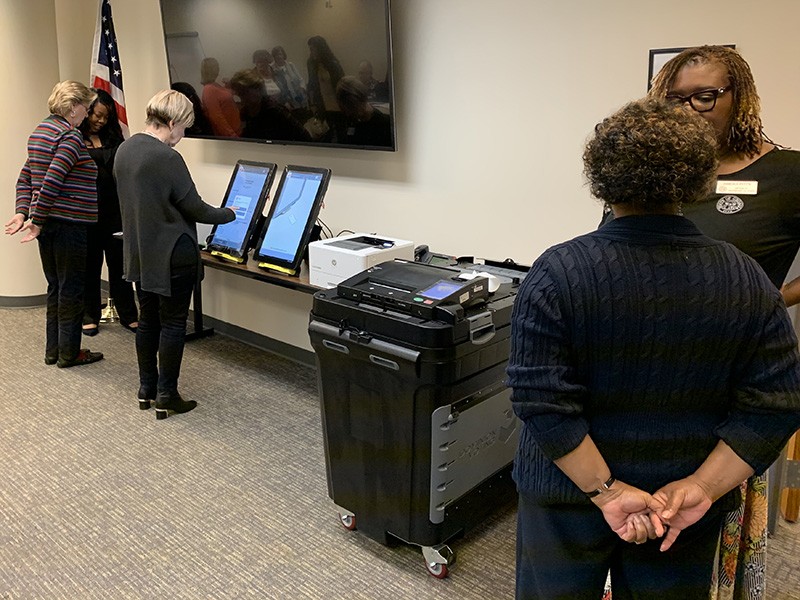 A larger-than-expected crowd showed up Tuesday for two demonstrations at the Hall County Government Center of how Georgia’s new voting machines will work.

About 50 people attended the first session, where representatives from the Secretary of State’s office demonstrated the new system, then allowed those in attendance to actual use the machines to cast pretend ballots.

Hall County elections officials, who hosted the event, were pleased with the turnout.

“I think this is an indication that the public is listening, and they are very interested in seeing these new machine, and coming in and learning everything they can,” Elections Director Lori Wurtz said. “I think this says we’re going to have a smooth election day.”

But Wurtz said she knows holding the demonstrations during business hours means some people cannot attend because they are at work.

“So people can drop by our office anytime during the day and we have some machines set up,” she said. “We’ll be happy to help people get familiar with the machines.”

Wurtz said groups of people can also be accommodated, but she asked the groups call the Elections Office to schedule an appointment. She also said the office would schedule night and weekend demonstrations if enough voters requested it.

“We want people to be comfortable with the machines,” she said.

Several voters who went through the mock voting process said they like the new equipment.

“This is a big change, and I wanted to get acquainted with the system,” Hall County voter Brenda Layne said. “It was easier than I expected it to be. I think I’ll be able to do it.”

But elections officials acknowledge that the new system may mean it will take longer to vote in the 2020 elections, at least until voters get used to how the new procedure works.

“I think it’s great, but I think it’s going to be slower, Susan Joninas, one of the county’s poll managers, said. “Slower moving, maybe not next year, but certainly this year.”

In anticipation of slower voting times, Hall County is planning to ramp up the number of poll workers it has at each of its 31 precincts to help voters learn the new system. Voters statewide will use the new machines for the first time on March 24, the date of Georgia’s presidential preference primary. Voters in Hall County will also vote on an education SPLOST on March 24.

Georgia lawmakers voted to change to this new system last year after complaints that the current system, in use since 2002, wasn’t secure. A lawsuit filed against the state in 2019 argued that the paperless touchscreen voting machines the state currently uses are vulnerable to hacking and can't be audited. It asked for statewide use of hand-marked paper ballots.

The new system is not marked by hand. But it does generate a paper ballot that voters will be allowed to review to make sure it reflects the choices the voter made. If the voter approves of the ballot, it is placed on a scanner, which records the person’s votes.

If the voter sees an error on the printout, a new ballot can be requested so that the voter can correct mistakes. 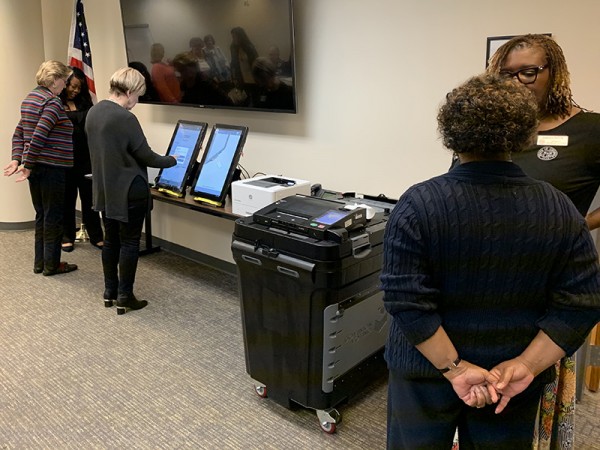 Voters show up to see new machines in action
A larger-than-expected crowd showed up Tuesday for two demonstrations at the Hall County Government Center of how Georgia’s new voting machines will work.

Oakwood City Council approves rezoning for Firestone Tire, votes on hotel tax increase
Oakwood City Council unanimously approved the rezoning of a 1.27 acre tract of land on Winder Highway from residential to highway business Monday night so a tire shop could build there.

Gwinnett County police search for man who sexually assaulted girl in store
Detectives with the Gwinnett County Police Department Special Victims Unit are asking for the public's help as they search for a man accused of inappropriately touching a young teenage girl as she was shopping on New Year's Day.
By AccessWDUN Staff 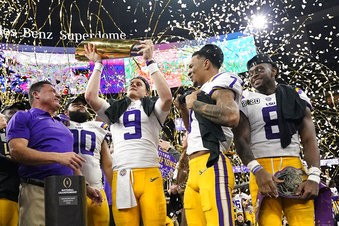 LSU, Burrow cap magical season with title
Joe Burrow threw five touchdown passes, ran for another score and capped one of the greatest seasons in college football history by leading No. 1 LSU to a 42-25 victory against No. 3 Clemson on Monday night to win the national championship...
By The Associated Press
Privacy | User Agreement | Contact | Advertise With Us
2020 © Jacobs Media Corporation. All rights reserved. EEO Report. Website by Full Media
Login / My Access
close
Search