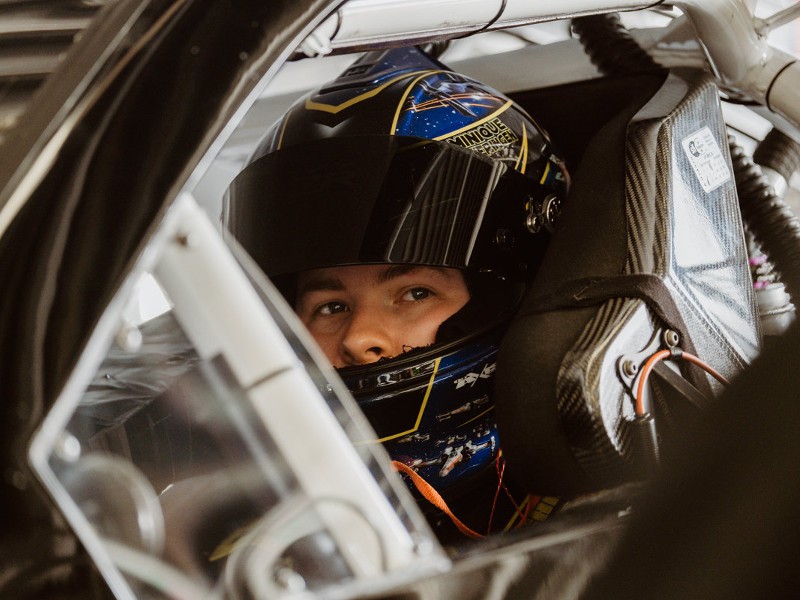 First-timer Dominique Van Wieringen led the way in the final day of testing for the ARCA Menards Series season-opener at Daytona International Speedway.

The two-day test session, leading into the February 10 Lucas Oil 200, was plagued both days by overnight rain showers that delayed the start, but the teams on hand were able to get nearly 15 hours of track time over the course of both days.

Van Wieringen, who has a career-best third place finish in the ARCA Menards Series East at Langley Speedway, piloted the No. 30 Rette Jones Racing Ford to a fast lap at 49.615 seconds/181.397 miles per hour.

“I was really surprised when Mark (Rette) said we went to the top of the charts,” Van Wieringen said. “I was practicing trying to time the draft for qualifying and I didn’t get it times just right. Hopefully when we come back for the race I can time it out a little better in qualifying and get even more.

“It’s been a good experience. It’s really intimidating because you go really fast and when things go wrong they go wrong really fast. For the first time out, it was better than I thought it would be. It was actually really relaxing. I don’t know how to explain it, it was just really relaxing.”

World of Outlaws star David Gravel timed in second fastest at 49.659 seconds/181.236 miles per hour. Gravel is slated to run a partial season for GNS Racing in the NASCAR Gander RV & Outdoors Truck Series and will get his pavement career started in the ARCA Menards Series opener at Daytona.

Sean Corr was third fastest with a lap at 49.676 seconds/181.174 miles per hour. He was followed closely by a trio Venturini Motorsports teammates, last year’s season runner-up and former Daytona winner Michael Self, Drew Dollar, and Ryan Repko.

Bret Holmes was seventh at 49.707 seconds/181.061 miles per hour, the final driver over 181 miles per hour. Riley Herbst, who led Friday morning’s session in the No. 18 Joe Gibbs Racing Toyota, was eighth at 49.799 seconds/180.727 miles per hour, just in front of the two Chad Bryant Racing teammates Jacob Heafner and Friday’s overall fastest Connor Hall.

The Lucas Oil 200 is scheduled for Saturday, February 10.