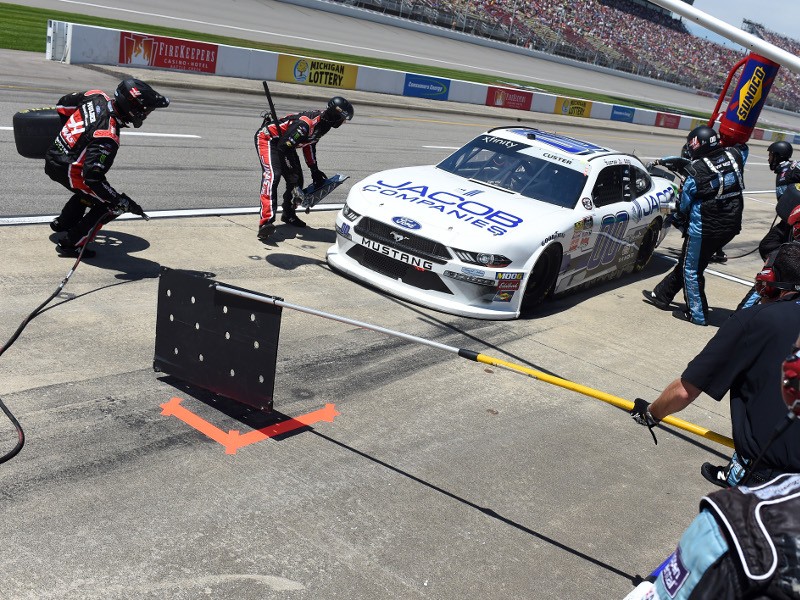 During stage breaks, per the new rules package, the race field will be frozen when cautions come out at all these venues. Teams will then decide to pit for fuel and change two tires on a single stop. On the road courses, teams may either add fuel or pit for four tires per stop.

Two pit stops for a full service – four tires and fuel – will now be required at these select events. The pit stop must be completed with a “designated time period” and the team roster for both series will include eight crew members, including the crew that goes over the wall.

After pit stops occurring under caution, restarts will be established based on the order of the cars at the time of the caution and the pit strategy used. Vehicles that did not pit would be at the front of the field, followed by vehicles that pitted once, followed by those that pitted twice and the free pass wave-around and penalty cars.

“I think it’s great to be a part of something that is essentially moving the sport forward and really emphasizing the strategy and allowing some different scenarios to play out that haven’t necessarily been playing out like it has been over the last few years,” said Ryan Pemberton, director of competition at JR Motorsports.

“So we’ve got a lot of good crew chiefs, not only here at JR Motorsports but in the industry and I’m excited to see these guys. It’s a good time for them to be able to use their strategy, their wit, and really be able to mix up the field and play a little bit different than it’s been played before.”

Eric Peterson, NASCAR’s technical manager of the NASCAR Xfinity Series said using the smaller race samples this year in the Xfinity and Gander RV & Outdoors Truck Series will be a good way to gauge if these rules are something that could be implemented on a grander scale. The series has pondered the idea and received input from various teams over the last five months.

And stand-alone events for both series were specifically chosen for logistics sake as the sanctioning body evaluates the new format.

“It’s somewhat of a departure from what we do today, so we wanted to dip our toe in the water and do a deliberate, strategic approach to implementing it and getting a look at it,” Peterson said.

He acknowledged the new rules bolster strategy and said he is encouraged by the competitive possibilities.

“The reason for limiting what they can do on each pit stop is so that we have the opportunity to have differing tire strategies,” Peterson said. “So if we had it where they can do whatever they want on each pit stop, then that would not allow us the opportunity to get different restart scenarios based on what you elected to do between two tires and four tires at an oval or four tires on the road courses.

“That decision was basically purely based off incentivizing the teams to make different strategy plays.”

David Pepper, the general manager of the ThorSport Racing team that just won a NASCAR Gander RV & Outdoors Truck Series championship with driver Matt Crafton, echoed the same positive sentiment as Pemberton, confident the new rules will create another element of competitive zeal. And, perhaps help bring up the competition level across the grid.

“We’ve leveled the playing field and I think you’re going to see a lot of really good stories from a lot of really good race car drivers that are out there and that are going to have an opportunity to go run in the top five and go run in the top 10,” Pepper said. “And it’s going to create stories and names that maybe aren’t household names that you see every single week and it’s just going to make the competition better.”

And, he added, “We want to go to the racetrack and have 15, 20 teams that have an opportunity to get a top-five finish or compete for a win or a solid finish. That’s just going to make it more exciting for the fans, both at the track and watching on TV.

“At the end goal, if Monday it’s a buzz on social media and all of you folks that we had a great event and what a fantastic race it was the day before, then we’ve all done our jobs and we’ve put out a great product and had a great race.”