Basketball: Lady Warriors hold off Branch, take over 2nd in 7-4A; Warriors get sweep in boys showdown 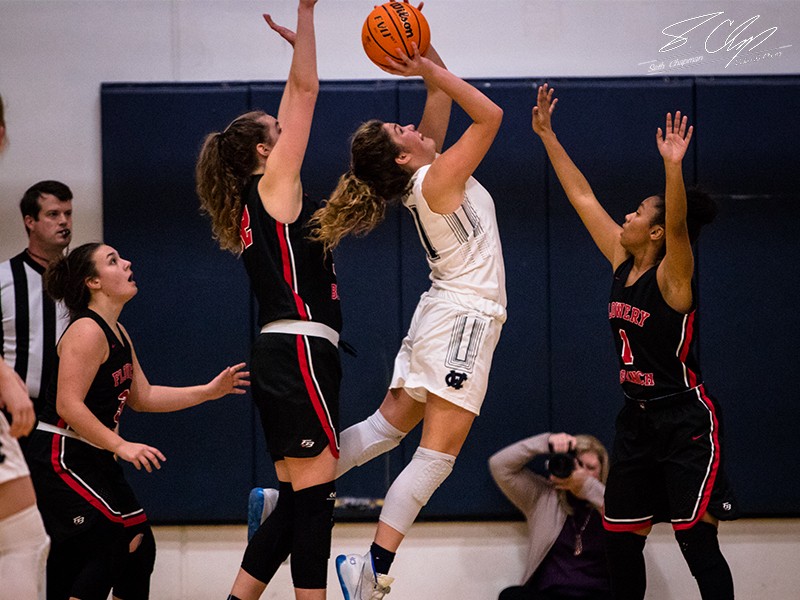 White County's Maddie Futch goes up for a shot against a host of Flowery Branch defenders.
Photo/Seth Chapman
Contact Editor

And that is exactly what White County girls basketball coach Jarvis Davenport is banking on.

Davenport’s Lady Warriors shook off a slow start, used an 11-2 run to grab the lead, and then unleashed a suffocating defense to pull away in the second half to take a 64-49 win over Flowery Branch Tuesday night in a key Region 7-4A win at home.

“We have four seniors and I think that is the real key for us,” Davenport said. “They stopped worrying about the (early season) expectations and just started to relax and play. I like where we are right now.”

Where the Lady Warriors are now is riding a 10-game win streak to push their record to 12-5 overall, 5-1 in Region 7-4A. More importantly, the win moved them into sole possession of second place in the region, now one game ahead of the Lady Falcons (10-7, 4-2 Region 7-4A) who are just 3-3 in their last six games.

“This was a big win for us and I think we have a chance to do some things in region this year,” Davenport said.

It was hard to tell early on, however, whether both offenses were shaky or both defenses were just that stout in the opening minutes as the two teams had 8 turnovers in their first 11 possessions combined. A pair of Maddie Futch free throws for White County broke the scoreless tie just over a minute in and a 3-pointer by Alana Veiga gave the Lady Falcons a 3-2 lead 30 seconds later.

That sparked what would become a 9-0 run for Flowery Branch over the next two minutes, capped by a Shaina Kriews basket. The Lady Warriors, after missing their first five shots, finally snapped the drought with a Naomi Crumley trey. Crumley’s shot ignited an 11-2 spurt to close out the first quarter, with a Crumley steal and basket giving White County a 13-11 lead.

Turnovers were an issue for both teams as White County had 10 and Flowery Branch 8 in the opening period leading to a combined 13 points.

But White County would not trail again. The Lady Warriors kept up the pressure in the second quarter forcing 8 more miscues and running out to a pair of eight-point advantages at 24-16 and 26-18 before the Lady Falcons rallied to cut it to 26-22 by halftime on a Kriews 3-pointer.

In the third quarter, the Lady Warriors opened with a 6-0 spurt in the first minute for a 32-22 lead and later got back-to-back 3-pointers from Dasha Cannon and Madison Adams in an 8-0 run to push the lead to 52-33, their biggest of the night.

Flowery Branch got a half-court heave at the buzzer from Kriews and knocked down three free throws in the first 20 seconds to start the fourth quarter to pull within 52-39. The Falcons would get as close as 61-49 with just over a minute left but White County hit 8-of-12 free throws down the stretch to hold off the rally.

Crumley finished with 16 points and Cannon and Futch each had 14 points to pace White County. Key 3-pointers by all three helped keep Flowery Branch at bay.

“I think our defense sparks our offense but when we’re hitting shots I feel like we’re a tough out,” Davenport said. “It was a slow start but we finally hit some shots and that got us going.”

Flowery Branch was led by Ashlee Locke with 15 points but she managed just five free throws in the fourth quarter before fouling out. Kriews finished with 13 points and Morgan Aguilar added 9 for the Lady Falcons.

Flowery Branch opened the game with a 4-0 spurt but White County answered with a 14-1 run to take control en route to a Region 7-4A win.

The Warriors (9-9, 2-4 Region 7-4A) snapped a two-game region losing streak with their second straight win overall. Flowery Branch (0-17, 0-6 Region 7-4A) is still looking for its first win under coach Jay Burney.

White County led 17-8 after the first quarter but Flowery Branch pulled within 24-19 by halftime. The Falcons looked to have tied the game at 26 in the third quarter on a Burney basket but he was called for an offensive foul. The Warriors used that momentum for a 10-4 run to get some distance.

The Falcons would not go away getting within two points three separate times. They got within 46-42 on a Judson Burney basket with 4:42 left but could get no closer.

Jaden Yeh led the way for White County with 16 points, including hitting 9-of-10 free throws in the final 1:34 to help preserve the lead. Cooper Turner had 13 points and Will Sampson and Reece Dockery each had 10 points for the Warriors.

Burney led the Falcons with 16 points before fouling out in the fourth quarter. Trevor Gurske and Trey Shaw had 7 points apiece for Flowery Branch.