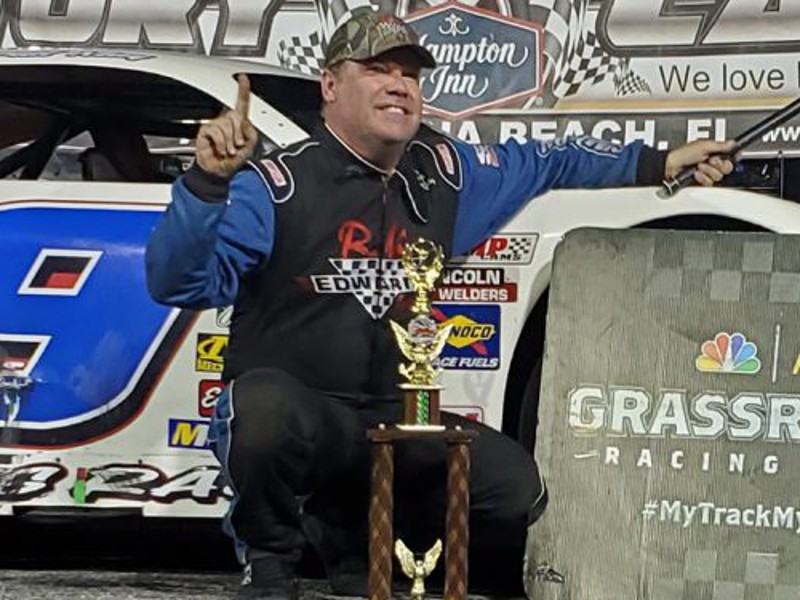 NEW SMYRNA, Fla. — Brad May turns 42 next week, but he showed Saturday night that he has no problem keeping up with the younger generation at his home track.

In fact, when it comes to Florida’s New Smyrna Speedway, it’s the teenagers that need to catch him.

May opened the 2020 NASCAR race season by winning the 50-lap portion of the RedEye 50/50, pulling away from 15-year-old Jett Noland in an eight-lap dash to the finish. Another 15-year-old, Daniel Dye, followed home in third in his Super Late Model debut for Ben Kennedy Racing.

Derek Griffith was fourth and fastest qualifier Anthony Sergi was fifth after losing out on a fierce battle for the third spot with Dye over the closing laps.

May is the defending and three-time Super Late Model Division champion at the high-banked Florida half-mile, while Dye won the Pro Late Model title last year.

The drivers used Saturday’s extra-distance event as a tune-up for the 54th Annual World Series of Asphalt Stock Car Racing at New Smyrna from February 7-15.

It’s one event hat has eluded May, who came up second to short-track veteran Bubba Pollard during last year’s week-long championship. The other, until Saturday night, was the track’s traditional opener. The Red Eye 100 dates back to 1984 when it was held on New Year’s Day. Beginning last year, it was split into two 50-lap features for the Super Late Model and Pro Late Model divisions.

May was second in both races last year.

The Oviedo, Florida, driver qualified second Saturday and started seven after a post-qualifying invert of the top eight spots. He took the lead in turn 4 of lap 10 from Noland after early race leader David Rogers slipped up the track in turn 2 earlier in the lap. May was slow to fire off the line on a lap 23 restart, and it allowed Noland to take over the point.

While May took the lead back two laps later, a Lap 42 caution set up another shot for Noland.

“You just never know what can happen,” said May, who executed a clean restart and rolled to the victory. “The car was definitely good enough to win, I knew I wasn’t going to let that happen again what happened on the first start, but you never know. One little slip or one little bobble getting into the corner and he can stick a nose in and be gone.”

It wasn’t all disappointment for Noland, who won the 50-lap Pro Late Model portion of the season-opening, non-points event.