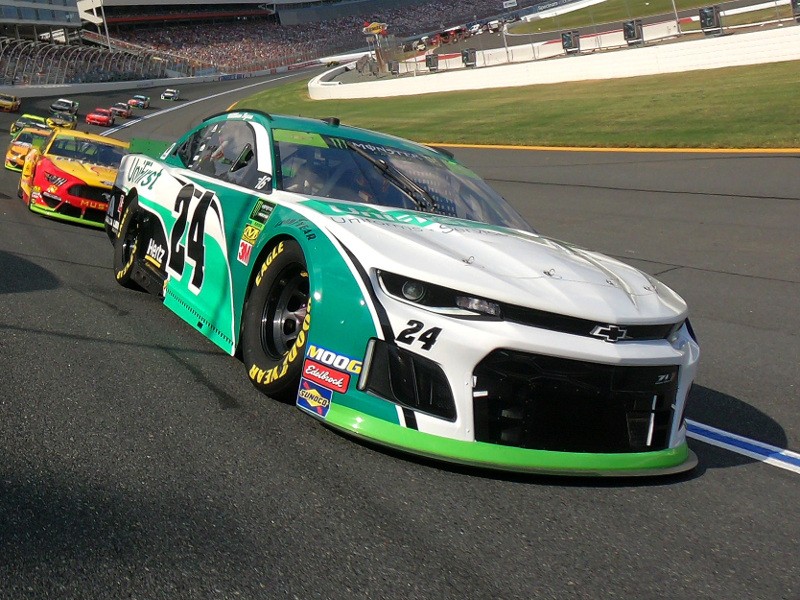 CONCORD, N.C. – Compared with teammate Alex Bowman’s stress-laden run to a berth in the Round of 12 of the Monster Energy NASCAR Cup Series Playoffs, pole winner William Byron’s path to advancement was relatively pressure free.

Though he surrendered the lead to Kyle Larson with two laps left in the first stage of Sunday’s Bank of America 400 at the Charlotte Motor Speedway road course, Byron snagged nine points for finishing second in the stage and spent most of the afternoon solidly in the top 10 before taking the checkered flag in sixth place.

Byron leaves Charlotte tied for 10th in the standings, finishing the race 13 points clear of 13th-place Aric Almirola, one of four drivers eliminated after the first round of the Playoffs.

“A sixth-place finish is good, and we’ll go on to Dover. I know it’s a good track for us.”

Byron will need a strong run at the Monster Mile. He enters the second round with one Playoff point, compared with 46 for top seed Kyle Busch.

Byron, who has five poles to his credit this season, doesn’t plan to change his approach in the Round of 12.

“Same thing — we can continue to do this for sure,” Byron said. “I have to recover from this race, the heat and go to Dover and have a really good race there.”

Clint Bowyer had to restrain himself from his typically aggressive approach to driving in the monster Energy NASCAR Cup Series, and it paid off on Sunday with a berth in the Round of 12 of the series Playoffs.

After a disappointing 25th-place finish — from the pole, no less — in the opening Playoff race at Las Vegas two weeks ago, Bowyer came to the Bank of America 400 at Charlotte four points below the cut line for advancement to the next round.

But Bowyer qualified fifth on Friday and exercised patience where necessary throughout Sunday’s race to secure a fourth-place result and a trip to the next round.

“We did what we had to do,” said Bowyer, who enters the Round of 12 seeded 12th, with no Playoff points to his credit. “We knew what we had to do all weekend long. We knew we had to dig ourselves out of a hole we put ourselves in at Vegas. We had a good weekend last weekend (eighth at Richmond) and had a great weekend this weekend.

“Coulda, woulda, shoulda — maybe a little bit more aggressive on those restarts, but, again, you could have got yourself wrecked, too. When it got down there to the end and we got our stage points and got ourselves in contention and was where we needed to be, it was time to re-evaluate your situation and where you were running and just protect. We were in protection mode.”

Having finished third in each of the first two stages, Bowyer had scored 16 stage points, but discretion was the better part of valor when it came to battling race winner Chase Elliott and runner-up Alex Bowman in the closing stages of the race. Bowyer felt a rash of cautions in the final stage hurt the chances of Kevin Harvick, his Stewart-Haas Racing teammate. Harvick ran third after losing the top spot with five laps left.

“That 9 (Elliott) and the 88 (Bowman) coming on those tires, man — it seems like every cycle would hurt old tires. I think if we could have got back green, I honestly think Kevin would have won the race. I don’t know what, just heat-soaked or whatever else, we were a good bit slower after those cycles than we were before them, so I was bummed out for Kevin.

“He dominated that race and was up front all day long and looked to deliver Stewart-Haas our first Roval win, but I’m proud of everybody’s efforts. It was a team effort for sure, all across the board. We worked together, practiced well, leaned on each other when we needed to and was courteous to one another on restarts, and that’s the way a four-car team needs to work.”

Defending race winner Ryan Blaney didn’t have a smooth afternoon in Sunday’s Bank of America 400 at Charlotte, but he salvaged an eighth-place finish-with the help of two timely cautions — and advanced to the second round of the Monster Energy NASCAR Cup Series Playoffs.

Blaney made hard contact with the wall on lap 58, and crew chief Jeremy Bullins contemplated bringing the No. 12 Team Penske Ford to pit road immediately, but opted against that course of action.

Daniel Hemric’s spin on the banking on lap 62, gave Blaney a chance to come to pit road under yellow, and the team went to work on the rear suspension. Another caution, for eventual winner Chase Elliott’s collision with the turn 1 tire barrier on lap 65, provided a chance for more repairs, and Blaney was able to improve his track position throughout the closing stages of the race, after restarting 36th on lap 67.

He was ninth for the final restart on lap 104 and moved up one position before the finish, earning a trip to the Round of 12.

“We definitely had a lot of ups and downs,” Blaney said. “I thought we did a pretty decent job most of the day finding ourselves towards the front. There were a lot of mixed strategies with the way the cautions fell.

“I messed up really bad and hit the fence and really set us back, but I’m really proud of the whole group for fighting and getting it fixed to where we could make some ground.”