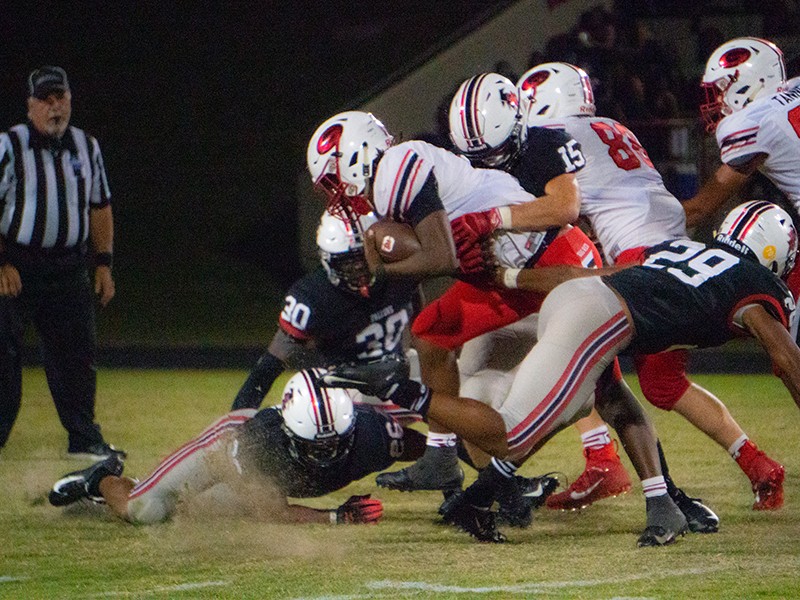 Football Highlights: Gainesville at Flowery Branch from AccessWDUN on Vimeo.

FLOWERY BRANCH — Gainesville kept it close but, in the end, Flowery Branch pulled away to beat the Red Elephants, 35-21, for the second straight year in another epic rivalry battle at Falcon Field.

The 14-point win is the Falcons' largest-ever margin of victory over Gainesville.

"The game seemed a lot like 2018's version of this matchup," Flowery Branch coach Ben Hall said. "Gainesville played hard and they swallowed us up at times with their big offensive line and they did a great job of running the ball. We had some costly penalties that put us in bad situations but, in the end, we overcame those, and I'm proud of the way our guys finished. Defensively, we bowed our backs when we needed to."

In what started as a low scoring rivalry game, Hall told his running backs that patience would pay off.

“The backs pressed a little bit early, we just told them to be patient. The stretch outside zone play was there, and instead of just hammering it up in there, they let them run come to them and it paid off”

Junior running back Jaizen Ellingham took his coaches advice, rushing for 149 yards on 19 carries while totaling 4 touchdowns on the night in the win over Gainesville.

“I’m proud of that offensive line and the holes they opened up,” Hall said

The game was tight from the beginning with the two teams exchanging scoreless possessions. After a Falcon punt, the Red Elephants were moving the ball down the field when a big hit forced a fumble that was pounced on by the Falcons Chase Dial-Watson.

Following the fumble recovery, the Falcons sensed the opportunity to score first and they would, going on an eleven-play drive consisting of all runs, finished off by an Ellingham 2-yard touchdown run.

The Red Elephants had a chance to stop the drive at their own 40, but the Falcons' Chandler White was able to move the chains on a big 9-yard run on 4th-and-2 to keep the drive alive.

Riding the momentum of their first score, the Falcons forced a quick 3-and-out and got the ball back great field position at midfield for their offense.

On first down, White took the handoff 13 yards and was brought down by a facemask, adding 15 yards moving the ball up to the Red Elephants 22. Four plays later, White found the endzone on a 5-yard run doubling the Falcons lead with 4:35 remaining in the half.

Down 14-0 and facing 4th-and-8 at their own 22-yard line, the Red Elephants looked to be in danger of giving the ball back to a hot Falcon offense. But a roughing the punter penalty gave the Red Elephants 15 yards and the first down.

The extra chance proved to be just what the Red Elephants needed, going 63 yards and eventually scoring on the last play of the half. It was the Red Elephants' best drive of the night, with two third-down and two fourth-down conversions, capped off by a Giovanni Williams 4-yard touchdown pass to Walt Dixon on a leaping jump-ball catch. For the drive, Williams totaled 36 yards on the ground while also going 4-of-5 through the air.

Opening the second half, Gainesville would receive the ball looking to even up the score. The Falcons had other plans though, and their defense came out strong stuffing the first three plays.

A short punt would set up the Falcons at their own 49, but they would turn the ball over on downs.

The Red Elephants second possession of the half-covered 18 yards to the Falcon 40-yard line, forcing a 4th-and-3. Attempting to convert through the air, Dixon made a great one-handed catch with what appeared to be enough yardage to move the chains, but he landed out of just out of bounds bringing a banged-up Gainesville defense back onto the field.

"We made some mistakes, got out of position a few times which extended some drives for them," Gainesville coach Heath Webb said. "We ended up playing a lot of backups in the second half defensively, because of some injuries. We had some guys out of place because they don’t have a lot of experience, but they played hard. I’m proud of those guys for competing.”

Those young defenders had their work cut out for them facing the Falcons offensive line, which was taking advantage while opening some nice holes. The drive covered 60 yards in just six plays, polished off by Ellingham‘s second touchdown run of the night around the left end. This one was from five yards out, giving the Falcons a 21-7 lead.

Again, the Red Elephants would not go quietly, with Williams leading his team down the field in less than three minutes and resulting in a touchdown cutting the Branch lead to seven, 21-14.

After converting one first down, Gainesville faced a big 3rd-and-11 at its own 36. Dixon again got behind the defense, and this time Williams dropped a nice pass just over the cornerback for a huge 48-yard gain, setting up the eventual 14-yard touchdown pass to JD Brooks.

The 3rd quarter would end with the Falcons facing a 3rd-and-14 at their own 26-yard line. Following the quarter break, the Falcons would call on Chase Dial-Watson who took the reverse handoff around the right end for 13 yards, forcing the Falcons into a fourth-down decision.

A designed run up the middle, Gainesville looked to have Ellingham stuffed, but he was able to escape and get outside for 8 yards to keep the drive alive.

A second down chop block penalty had the Falcons offense facing 3rd down and 25. Quarterback David Renard made his best play of the night, dropping in an over the shoulder to Connor Larson for 37 yards and a huge Falcons first down.

Three plays later, Ellingham took the handoff and again bounced it outside for a 13-yard touchdown.

Up 28-14 with just over 8 minutes remaining and their running game going strong, the Falcons looked to have firm control of the game, but the Red Elephants were not done yet.

Williams led his team on another long drive, totaling 80 yards and 17 plays, including two fourth-down conversions. He eventually scored on a 6-yard keeper, cutting the score to 28-21 with only 3:31 remaining.

The ensuing kickoff and the first play from scrimmage were where Flowery Branch would seal the game.

Chase Dial-Watson took the short kick all the way back to the Gainesville 31-yard line. On the very next play, Ellingham scored his fourth and final touchdown of the night sprinting past the Red Elephant defenders for the score, much to the delight of the sold-out crowd at Falcon Field.

Gainesville would have one final drive, and after moving the ball to the Falcons 40, Williams pass was intercepted by Chase Dial-Watson.

For the game, Williams went 11-of-24 totaling 119 yards, two touchdowns and the interception. He added 145 yards on 23 carries for a touchdown on the ground as well.

Both teams will open their region schedule next week and both coaches agreed this was a good test for the road ahead.

“We needed a game like this, we haven’t played a lot of football this year," Hall said. "You look at our schedule, with two early bye weeks and a game that was postponed due to lightning, we’ve played two games and a quarter. We needed a four-quarter game."

The Falcons welcomes White County Friday, while Gainesville travels to Dacula. Both games are slated for a 7:30 kickoff.