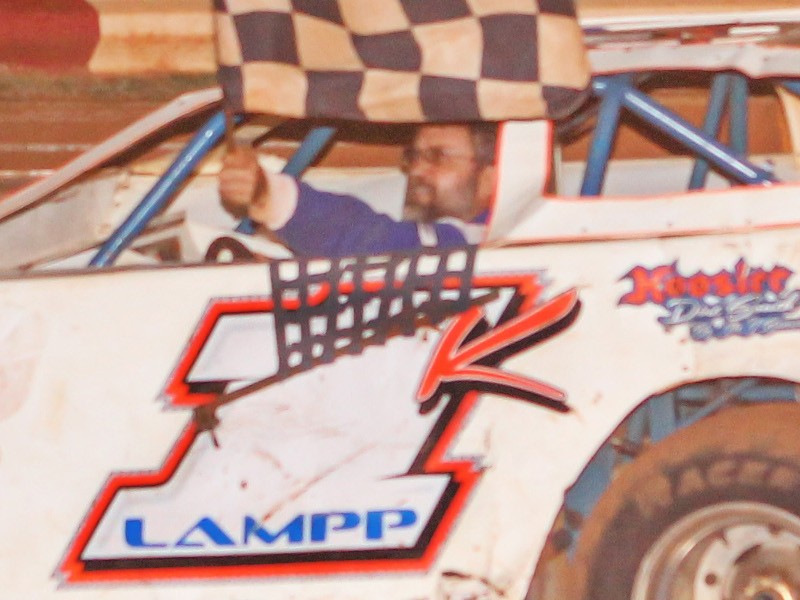 Despite not once giving up the lead, it was still not an easy win for the Winder, Georgia native.

Lampp started on the pole, and drove to the lead in the first two turns, with Brandon Roberts and Dustin Cason in pursuit around the ¼-mile clay raceway.

Cason would bypass Roberts for the runner-up spot on lap two, while behind the leaders, Scotty Chatham and Chris Woods drove into the top five.

The action would be broken up when J.J. Cason spun in turn three to bring out the first caution of the night.

On the restart, Lampp moved back to the point, while Woods moved to third behind the lead duo. The action was broken up again late when Roberts and Greg Pruitt tangled on the backstretch, bringing out the final caution of the night.

Back under green, Lampp was able to build a sight lead, but Cason kept him within striking distance. Over the final laps, Cason was able to close to within four car lengths, but Lampp held him off to record the victory.

Chris Woods followed in third, with Scotty Chatham in fourth.

Ronnie Poole topped the Stock V8 field to take the win. Mark Chancey followed in second, with Trey Pilgrim in third and Wormy Gaddis in fourth.

Just Taylor was the winner in the Stock 4A feature. Kyle Braswell finished in second, with Zach Sanders in third, Shane Peppers in fourth and Joseph Dyer in fifth.

David Ivester scored the victory in the Stock 4B feature, with Derrick Lord in second, Daniel Conner in third, B.J. Franklin in fourth and John Martin in fifth.

Winder-Barrow Speedway is back in action on Saturday, September 14 for the Roger Cooper Memorial. Check WinderBarrowSpeedway.com for more information.