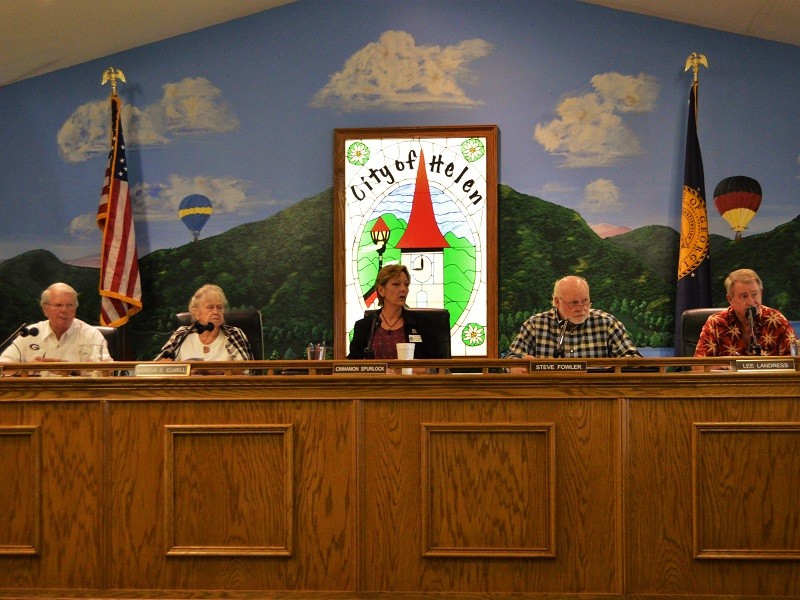 Members of the Helen City Commission discuss the use of city loading zones by carriage operators.
Rob Moore
Contact Editor

HELEN – The City of Helen is taking back its loading zones for their intended use, but that means horse-and-buggy operators will have to find a new area to pick up and drop off passengers.

During its meeting Tuesday, the Helen City Commission discussed recent issues with carriage operators refusing to move to allow parcel delivery companies, trucks and even police to use the loading zone, claiming that loading zone is “our parking space”.

Because of the unwillingness of those carriage operators to work with those who serve and deliver to the downtown area, commissioners decided carriages have until Dec. 31 to locate and secure a new property from which to load and unload passengers. On Jan. 1, 2020, the city’s loading zones will revert to their intended use.

At that time, no horse and buggies or amusement rides will be able to use the city’s designated loading zones to pick up or drop off passengers.

While the loading zone near Dye Street on the north end of the Market Platz hasn’t been an issue, Mayor Cinnamon Spurlock and others said the one on River Street already is a problem.

Commissioners say there is too much congestion near the intersection of River Street and Main Street, where public restrooms are located. Add horses and buggies into that mix and children dart across River Street from the restrooms without looking, often with vehicles turning into the street from Main Street, Spurlock said.

“It scares me with the horses there, because the kids don’t even look when they’re on the side by the restrooms,” Spurlock said. “All they see is a horse and they take off. The parents are on their phones or whatever.”

Commissioners said they are not trying to run carriage operators out of town but want them to find a solution that doesn’t create issues with deliveries to downtown merchants, who rely on the arrival of new merchandise and supplies.

“It would alleviate a bunch of delivery stress that we have,” said Helen Police Chief Brian Stephens. “We have had calls from UPS and have had to go down and instruct the horse and buggies that UPS is allowed to park there. I did get out there one day and as I was walking up, we had one yell at me and tell me I wasn’t allowed to park there.”

Officials said odor has been another issue, especially during the recent heat wave.

Public Works Director Ross Hewell said carriage operators clean up after themselves for a little while, then they won’t. That means animal urine and other waste is going in the streets and storm drains.

“All that drainage is going down by the barbecue place and down by the Troll Tavern,” Hewell said.

“And where does that drain to?” Spurlock asked. “Into the river, right?”

Drainage containing waste generated by the horses flows through the storm drains and enters the river, which is used by tubers during the season, officials said.

Commissioner Lee Landress said he is not opposed to the concept of disallowing use of the loading zones after ample notice is provided to carriage operators.

“I don’t have a problem making them secure their own parking place not on city property, to do their loading, unloading, whatever,” Landress said. “Keep them on the same route.”

On the motion of Commissioner Steve Fowler, seconded by the Landress, the city commission voted unanimously to notify the carriage companies that as of Jan. 1, 2020, they must have their own property from which to load and unload passengers.