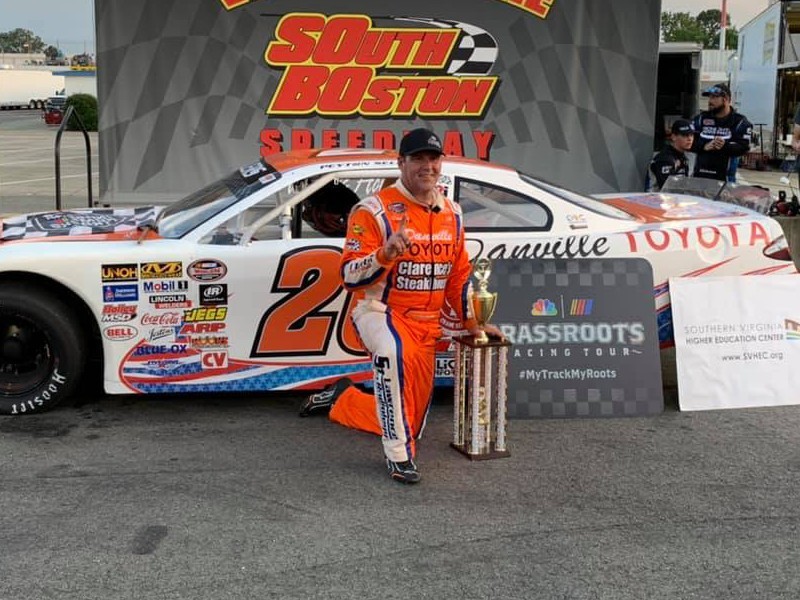 This season’s title is the third South Boston Speedway track title in a row for Sellers, who finished second to Lee Pulliam in the opening 75-lap race and unofficially finished 10th in the second of Saturday night’s pair of 75-lap NASCAR Late Model Stock Car Division races.

Pulliam’s win over Sellers in the opening 75-lap race came by less than a second. The win was Pulliam’s fifth victory in a row at the .4-mile oval.

Drew Dollar of Atlanta, Georgia was the unofficial winner of the second race, a dramatic race that saw Sellers and Pulliam battle side-by-side and bumper-to-bumper for the lead for the final 30 laps. As the two drivers sped into the third turn on the final lap, Sellers’ car made contact with the rear of Pulliam’s car, and Pulliam spun between turns three and four.

Sellers sped to the finish line ahead of the rest of the field, but was penalized by track officials for causing the incident and was awarded 10th place, the last position behind the rest of the cars that finished on the lead lap.

Dollar, who was running third at the time, was declared the unofficial winner, with Thaxton finishing second, Scott taking third place, Blake Stallings being awarded fourth place and Nick Smith rounding out the top five finishers in the unofficial finishing order.

Willis and Jacob Borst waged a hard-fought battle for the win after the race’s final caution flag flew with 13 laps to go, with Willis getting beside Borst on the inside several times without being able to make the pass.

A last-ditch effort by Willis on the last lap to earn the win came up short as Willis spun as the pair sped off of the fourth turn heading to the checkered flag.

Borst sped across the finish line to grab his sixth win of the season and tie Willis for the most wins in the division. Landon Pembleton finished third, with Mark Cook finishing fourth and Mitchell Wright in fifth.

Crews won the race to earn his ninth victory of the season, edging Scott Phillips by .778-second.

Jared Dawson edged Josh Dawson by a foot in a near photo finish to win the 15-lap race and earn his second victory of the season.

Tyler Stanley came home in third, with Currin in fourth and Donald Clay in fifth.

South Boston Speedway will close out its 2019 season with the CARS Tour Series on Saturday, November 2. For more information, visit SouthBostonSpeedway.com.