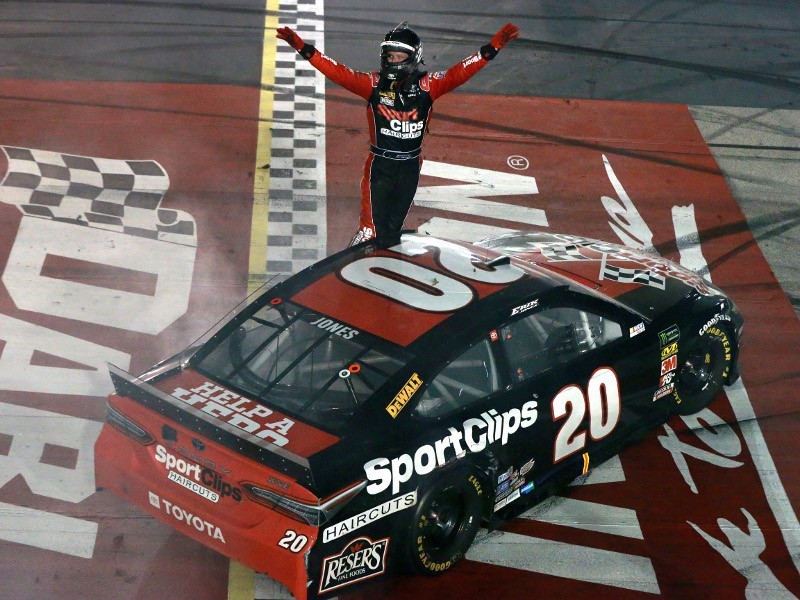 SPEEDWAY, Ind. – The doubters and nay-sayers can now take a vacation, as far as Erik Jones is concerned.

Buoyed by his victory in last weekend’s Bojangles’ Southern 500 at Darlington Raceway, Jones has signed a contract extension with Joe Gibbs Racing that will keep him in the No. 20 Toyota next season, ending misguided speculation that he might lose his job to rising star Christopher Bell.

In recent weeks, Jones had expressed confidence that he and JGR were close to a deal.

“I’m so happy to finally have my plans for 2020 confirmed and to talk about it,” said Jones, who has two Monster Energy NASCAR Cup Series victories to his credit. “I’m excited to be staying with Joe Gibbs Racing and the 20 team and to continue the success that we have built over the last two years in the Cup Series.

“I put my heart and soul into this and this race team. This is my living and how I want to make a career and what I want to do. I’ve been racing with JGR since 2014, and it’s really cool to be able to continue with the foundation we’ve built over the years and hopefully win more races and contend for championships together.”

Jones was “discovered” by JGR teammate Kyle Busch, who lost a heated battle to the then 16-year-old in the 2012 Snowball Derby. Busch subsequently signed Jones to drive a Kyle Busch Motorsports entry in the NASCAR Gander Outdoors Truck Series, and in his only full season with KBM, Jones delivered at series championship in 2015.

Running a full NASCAR Xfinity Series schedule in 2016, Jones won four times and finished fourth in the final standings. He picked up his first Cup victory in the July 2018 Daytona race and qualified for the 2019 Playoffs last week with his victory at Darlington.

“Erik has accomplished so much in our sport already and yet, he really is just at the start of a long career,” said team owner Joe Gibbs. “He’s been a part of Joe Gibbs Racing for almost his entire professional career and we’re excited to see what the future holds for him.”

For one year at least, that future lies in the No. 20 Camry.

Indianapolis Xfinity Victory Would Be The Highlight Of Briscoe’s Career

For driver Chase Briscoe, who learned his craft on dirt bullrings in his native Indiana, nothing could be better than a victory on the big track at Indianapolis Motor Speedway.

Driving for team owner Tony Stewart, whose exploits at Indianapolis are the stuff of legend, Briscoe will get his second shot at the Brickyard in Saturday’s Indiana 250 NASCAR Xfinity Series race.

Briscoe comes to Indianapolis riding a wave of eight straight top-10 finishes, including a victory at Iowa Speedway that locked him into the Xfinity Playoffs, but the driver of the No. 98 will be the first to tell you how significant a win at the historic 2.5-mile speedway would be.

“The championship’s what your goal is, but from a personal standpoint, winning at Indianapolis — especially driving for Tony Stewart — there’d be nothing cooler except for winning the Brickyard (Monster Energy NASCAR Cup Series race),” said Briscoe, who finished ninth last year in his maiden race at the Brickyard.

“I’ve already had in my mind, if I win this thing, I’m climbing the fence like Tony. I’ll probably start crying. I want to win this race so bad. At the beginning of the year, me and my crew chief (Richard Boswell) sat down and kind of circled races, and Indianapolis was the first one I wanted to win.

“I said if we’re going to put an all-out effort in, that’s the won we need a win at. We going to try tomorrow, and hopefully we get it done.”

As Cole Custer tries to break a tie for the lead in NASCAR Xfinity Series victories, he expects the draft to be an important factor in Saturday’s Indiana 250 at Indianapolis Motor Speedway.

“You’re wide open,” said Custer, who got his sixth win of the season — tying Christopher Bell for the series lead — last Saturday at Darlington Raceway on a post-race disqualification of Denny Hamlin’s car. “You’re trying to get your car to handle as good as it can but without having to lose a ton of speed. It’s just constantly a balance of trying to figure that out.

“I think in the past here our races have been obviously really good. Everybody stays really packed up, and you’re able to get drafts and stuff like that. It should be a really exciting race, I think.”

The possibility of drafting, however, isn’t enough for Custer to prefer running second off the final corner.

“You want to be leading,” said Custer, who was eighth fastest in both Xfinity Series practices on Friday. “With this package, you can definitely get a draft, but it takes the perfect scenario for you to get that big of a run.

Note: Bell led opening practice with a lap at 168.218 mph. Justin Haley was fastest in Happy Hour at 168.227 mph. Brandon Jones had the best consecutive 10-lap average in final practice at 166.151 mph. No driver ran 10 consecutive laps in the opening session.

WDUN will carry live IMS Radio Network coverage of the NASCAR weekend from Indianapolis Motor Speedway.  It starts with Saturday’s NASCAR Xfinity Series Indiana 250 at 2:30 pm on 102.9 FM and streaming live on AccessWDUN.   Then on Sunday, it’s the Monster Energy NASCAR Cup Series Brickyard 400 beginning at 1 o’clock on 102.9 FM, AM 550 and streaming live on AccessWDUN.