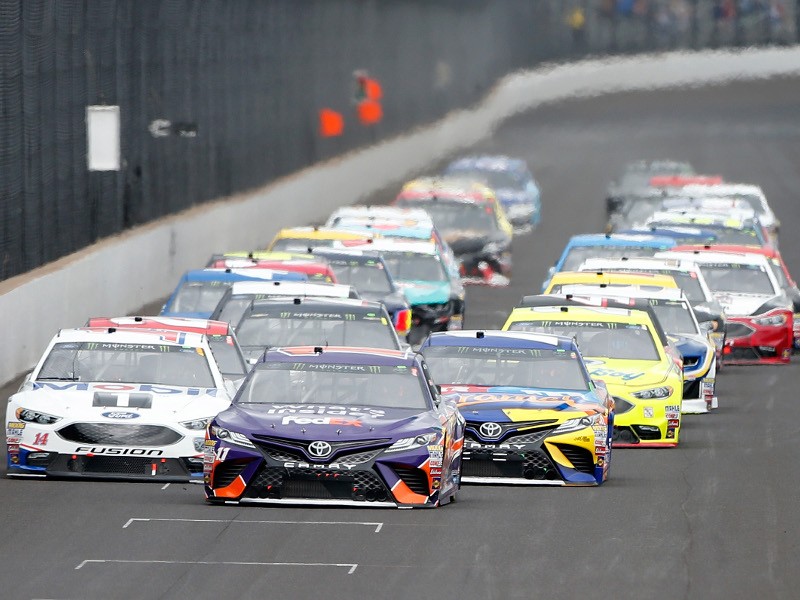 It comes down to this.

Four drivers will have one race to settle the final two Monster Energy NASCAR Cup Series Playoff positions at the Indianapolis Motor Speedway in Sunday’s Brickyard 400.

Three veterans and one young newcomer – Clint Bowyer, Ryan Newman, Jimmie Johnson and Daniel Suarez – will put it all on the line in one of the most demanding events on the schedule to set the 16-driver Playoff field for NASCAR’s postseason battle beginning next week in Las Vegas.

Stewart-Haas Racing driver Clint Bowyer is in 15th in the series driver standings and holds an eight-point edge over his SHR teammate Daniel Suarez in 16th and Roush Fenway Racing’s Ryan Newman in 17th, who are tied in points but Suarez currently holds the tiebreaker. Hendrick Motorsports driver Jimmie Johnson – whose four wins at Indianapolis Motor Speedway are most among active drivers – sits in 18th place, 18 points behind Suarez and Newman, 26 points behind Bowyer. The seven-time series champion Johnson has never missed the Playoffs previously.

Here’s a look at their history and their expectations this weekend at Indianapolis:

– The 40-year old Clint Bowyer is racing for his Playoff livelihood. And he’s answered the call with back-to-back top-10s in the last two races – seventh at Bristol and sixth at Darlington – to regain a position in the Top 16 of the Monster Energy Series driver standings. He has only an eight-point cushion over his Stewart-Haas Racing teammate Daniel Suarez in 16th and Roush-Fenway Racing’s Ryan Newman in 17th and he holds a 26-point edge over 18th place Jimmie Johnson. Bowyer has four top-10 finishes at Indianapolis, including a fifth-place finish last year when he led 37 laps. His best effort at Indianapolis was fourth – in 2006 and 2010.

– Daniel Suarez, 27, has made dramatic gains in the Playoff hunt and in just the last few weeks put himself in position to make his first postseason run. He shows up at Indianapolis having earned two top-10 finishes in the season’s last three races – totaling nine on the year. His best showing of the season in the No. 41 Stewart-Haas Racing Ford was a third-place finish at Texas in the spring. In two starts at this weekend’s Indianapolis venue, Suarez has finishes of seventh and 18th. He’s yet to lead a lap at Indianapolis but he has completed every lap of competition.

– Ryan Newman, who drives the No. 6 Roush-Fenway Racing Ford, won the 2013 Brickyard 400 from the pole position and has scored top-10 finishes in his last two races at the speedway. He has five top-10 finishes in 18 starts there and led 59 laps. He’s finished 11th or better in six of the last seven races. On the season, Newman has eight top-10 finishes including a best of fifth place at the Daytona summer race. He is attempting to make his first Playoff run since 2017.

– Jimmie Johnson is looking to continue an amazing streak of making every Monster Energy NASCAR Cup Series Playoff since its inception in 2004 – although he faces a deep challenge this weekend, needing to win or make up 26 points on Bowyer or 18 points on Suarez and Newman. But when it comes to Indianapolis Motor Speedway, nobody in Sunday’s field has been more successful. He won four times between 2006-12, was runner-up in 2013 and finished third in 2016 – seven top-10 finishes in all. Johnson’s No. 48 Hendrick Motorsports Chevrolet will need to end a stretch of seven tough races. His best finish in the last two months is 15th at Pocono-2. He has eight top-10 finishes on the season including a best of third place at the Daytona summer race.

“We have a great thing going right now on our team – everyone is pulling in the right direction,” Johnson said this week. “There is some pressure to go out and win this weekend, but that is what we do every weekend. We go to a track with the intention to contend for wins.

“If I look back over the first half of the season, I see a lot of races where we gave a way a few points. It’s kind of unfair to put all the pressure on one race in Indy, but that is where we are right now. It’s a great track to win at. We know what we have to do this weekend.”

The Xfinity Big 3 as the championship leaders have become known, added to their resume last week at Darlington Raceway with Cole Custer being awarded his sixth victory of the season after race winner Denny Hamlin’s car was disqualified for failing post-race inspection.

The Stewart-Haas Racing driver, Custer, sits third in the championship with six wins. Christopher Bell, driver of the Joe Gibbs Racing No. 20 Toyota, is second in the standings also with six wins. And defending series champion Tyler Reddick holds a 51-point advantage atop the standings with four wins himself. Should the Richard Childress Racing’s Reddick earn enough points to take a 61-point edge over the field after Indianapolis, he would officially win the regular season championship.

These three drivers – Reddick, Bell and Custer – have accounted for a stunning 75 percent of the wins this season. However, none of them have won at the famous Indianapolis Motor Speedway.

The driver just behind them in points – veteran Justin Allgaier – is the defending race winner and joins three-time race winner Kyle Busch as the only former winners in this week’s field.

Allgaier has already secured a position in the Playoffs by his points standings, joining race winners Austin Cindric (two wins), Chase Briscoe (one win), Michael Annett (one win) and series rookie Noah Gragson, who point-ed his way in after the Darlington race.

Among those who could secure a Playoff spot this week – depending on several factors – are Justin Haley, rookie John Hunter Nemechek and Brandon Jones. Of course a first-time winner from among the series regulars has a Playoff spot waiting as well.

Kyle Busch and Austin Dillon will be the only two Monster Energy Series regulars on the Indianapolis grid on Saturday.

WDUN will carry live IMS Radio Network coverage of the NASCAR weekend from Indianapolis Motor Speedway.  It starts with Saturday’s NASCAR Xfinity Series Indiana 250 at 2:30 pm on 102.9 FM and streaming live on AccessWDUN.   Then on Sunday, it’s the Monster Energy NASCAR Cup Series Brickyard 400 beginning at 1 o’clock on 102.9 FM, AM 550 and streaming live on AccessWDUN.

Monster Energy NASCAR Cup Series
Next Race: Brickyard 400
The Place: Indianapolis Motor Speedway – Speedway, IN
The Date: Sunday, September 8
The Time: 2 p.m. ET
TV: NBC, 1:30 p.m. ET
Radio: IMS Radio, SiriusXM NASCAR Radio
Distance: 400 miles (160 laps); Stage 1 (Ends on Lap 50),
Stage 2 (Ends on Lap 100), Final Stage (Ends on Lap 160)
2018 Race Winner: Brad Keselowski
What to Watch For: Two-time Brickyard 400 winner Kyle Busch boasts the top driver rating (since 2005) at 106.7. Four-time winner Jimmie Johnson (101.3) is the only other driver in this week’s field with a rating over 100. … Johnson (four) and Busch (two) are the only multi-time winners in this week’s field. … Jeff Gordon won the inaugural NASCAR race at IMS in 1994 and his five wins is most all-time. …There have been 16 different winners in 25 Indianapolis races, six are active this weekend. … Ryan Newman leads all active drivers in average starting position (9.667). It is the best mark all-time among drivers with at least nine starts. … The oldest pole winner is Mark Martin (2009) who topped qualifying at the age of 50 years, six months and 24 days. … The youngest pole winner is Reed Sorenson, who won the pole in 2007 at 21 years, five months. Sorenson is the only driver to earn his first career pole at Indy. …. Chevrolet has won the most pole positions (10), followed by Ford (six) and Toyota (four). … Jimmie Johnson (2008-09) and Kyle Busch (2015-16) are the only drivers to win back-to-back races. … The youngest race winner was Jeff Gordon (23 years, two days) in 1994. … The oldest to win was NASCAR Hall of Famer Bill Elliott (46 years, nine month, 22 days) in 2002. …. Paul Menard is the only driver to score his first career win (2011) at Indianapolis. … The front row has produced the most race winners – four from pole – making it the winningest spot on the grid. … The deepest in the starting field a driver has started and won is 27th – Jeff Gordon in 2001. … Kurt Busch has the most starts (18) without a victory. … Hendrick Motorsports is the winningest team (10 victories) at Indy – double that of the next closest Joe Gibbs Racing (five). … Chevrolet has earned the most wins (17), including a 12-race winning streak from 2003-14. Ford has four wins and Toyota has two. … Jimmie Johnson and Kevin Harvick have the most top-five finishes among active drivers (six). … Kevin Harvick has the most top-10 finishes (12) among active drivers. Jeff Gordon holds the all-time record at 17 top-10s. … Kevin Harvick boasts the best average finish (9.389) all-time. … Jeff Gordon has led the most race laps (528 laps in 23 starts). … Kyle Busch leads active drivers with 324 laps led in 14 starts. … Ricky Rudd defeated Bobby Labonte by .183-seconds in 1997 – the closest Indianapolis race in Monster Energy Series history.

NASCAR Xfinity Series
Next Race: Indiana 250
The Place: Indianapolis Motor Speedway – Speedway, IN
The Date: Saturday, September 7
The Time: 3 p.m. ET
TV: NBCSN, 2:30 p.m. ET
Radio: IMS Radio, SiriusXM NASCAR Radio
Distance: 250 miles (100 Laps); Stage 1 (Ends on Lap 30),
Stage 2 (Ends on Lap 60), Final Stage (Ends on Lap 100)
2018 Race Winner: Justin Allgaier
What to Watch For: There have been seven races held at Indianapolis Motor Speedway, previously – from 1982 to 2011 – the race was run at Lucas Oil Park (Indianapolis Raceway Park). … Brad Keselowski won the first Xfinity Series race at Indianapolis Motor Speedway in 2012. His runner-up that day was Team Penske teammate Sam Hornish, Jr., who won the 2006 Indianapolis 500. … Justin Allgaier is the defending race winner earning the win in the closest finish to date – .092-seconds over eventual 2018 season champion Tyler Reddick. … Kyle Busch has the most wins – three of the seven races. All his wins were from the pole position. … Twice Busch swept both the Xfinity and Cup series races at Indy – in 2015 and 2016. He won three of the four races from the pole. … Chevrolet and Toyota each have three wins in this race. Dodge has one. …The most lead changes in this race was 16 in 2017 – a race won by William Byron. …The largest Margin of Victory is 3.304-seconds when Keselowski beat Hornish in the inaugural race. … The most laps led in a race is 92 – Kyle Busch did it in his 2013 win. … The fewest laps led by a winner is 24 – when Ty Dillon won in 2014. … The most laps led by a driver who did not win is 51 laps. Kyle Busch led those laps en route to a 22nd-place finish in 2012. … This race has been shortened because of weather only one time – 2016. It was 63 laps instead of the scheduled 100. … The farthest starting spot to win the race is eighth place – Brad Keselowski in 2012.