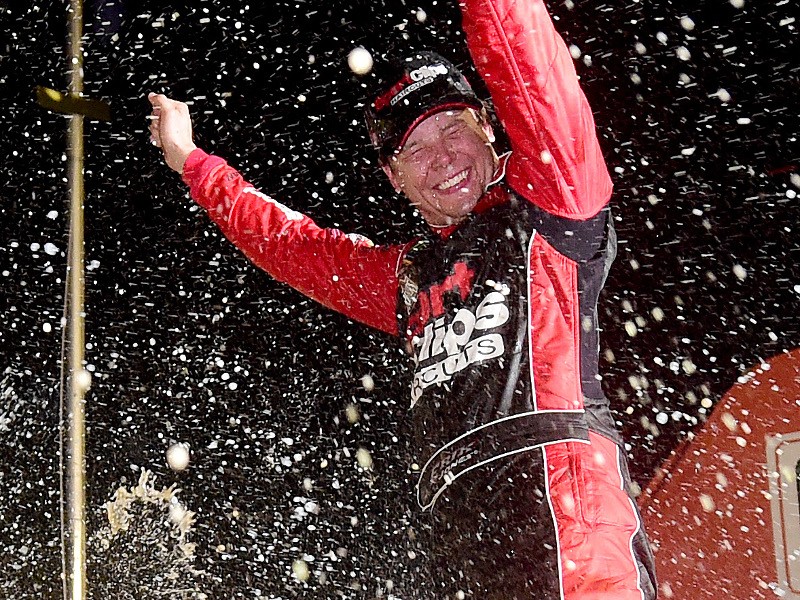 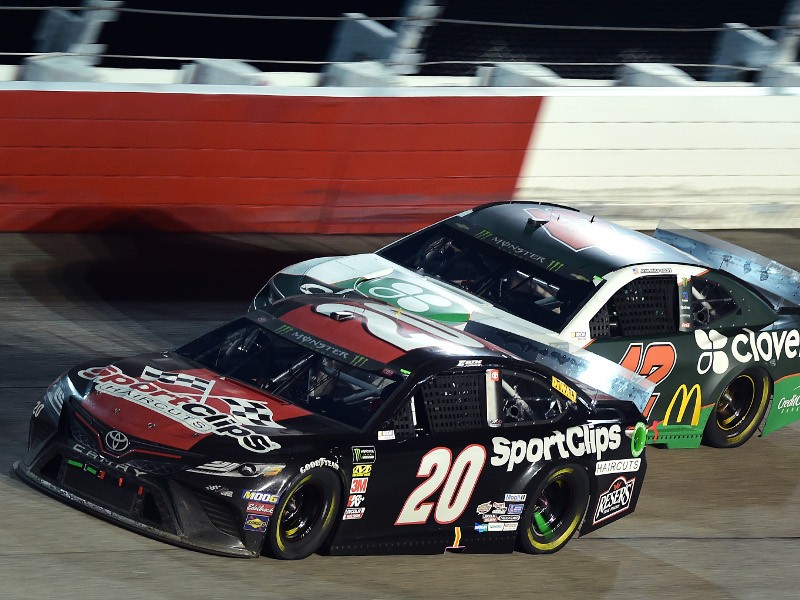 Erik Jones drove the race of his life in the early hours of Monday morning.

The 23-year-old held off his Joe Gibbs Racing teammate Kyle Busch over the closing laps to score the win in the rain delayed Bojangles’ Southern 500 at Darlington Raceway.

Rainy weather pushed the start of the race back by almost four hours, leaving the race to end just before 2 a.m. Monday morning.

It also locks him into a spot in the Playoffs one week out from the cutoff race.

“It’s incredible. I mean it’s incredible,” Jones said. “I’ve got my family here, some great friends and it’s just so cool to have him there and celebrating this with me. It’s going to be a lot of fun. Man, I never would have dreamed to be honest with you. It was too far out to fathom really for me to even be in a situation like this and just thankful for JGR (Joe Gibbs Racing), Circle K, Sport Clips and DeWalt and everybody who’s been a part of this and really stuck by me this year and helped us get back here.”

Jones, driving a car painted to resemble his first Late Model short track car, took the lead from Kyle Larson on the final restart of the race in a spirited, back and forth battle.

The Byron, Michigan native would lead the final 40 laps, at one point pulling out to a one second advantage over Busch and Larson. But Jones saw his advantage evaporate with less than ten laps to go when he tagged the wall, allowing Busch to close the gap.

But over the final laps, Jones was able to hold the measure over Busch to score his second career Monster Energy NASCAR Cup Series victory. He was aided when Busch got hard into the wall, sealing the deal for Jones.

“Well, it was just a lot of pressure. Kyle (Busch) is a great race car driver. I’ve raced him a lot and you obviously want to beat him to win, right? I know our first win at Daytona was great, but man, this one feels good. Just getting back to victory lane, showing we can do this continuously.

“Man, it was a lot of work. I’m mentally drained, I’m physically drained. I knew he was running the wall and I knew I was going to have to go up there and try to hold him off. It took everything I had to do it. I was pedaling hard. Fortunately, he got into the wall a couple of times. He gave me a little breathing room for the last two laps. That felt good, but awesome to come home with this win.”

Kyle Larson would get past Busch’s ailing Toyota to come home in second place.

“Eric (Jones) did a good job on that last restart to get by me and I was better than him throughout that run, but I could never do anything with him just because the dirty air was really bad,” Larson said. “It’s a worn-out surface and the groove was already narrow and it was extra difficult. I feel like both the No. 18 (Kyle Busch) and I were a little bit better than he was at the end, but I couldn’t do nothing with him. So, that part of it was frustrating.

“But still, it was good to have a good run. It was a good day for our Clover Chip Ganassi Racing team. So, we led some laps and was able to challenge a little bit there at the end. I wish we could have got it done, but to come away with a top three at the Southern 500 is not too bad.”

Kyle Busch, who won the race’s second segment, soldiered home in third despite a cut tire sending him hard into the outside wall.

“You just can’t get there with this package,” Busch said. “It’s just such a one lane racetrack. There’s not enough options, there’s not enough grooves that you can get enough air on your car to close that gap and make that pass. We kind of lost control of the race there on pit road when we came down the leader and then came out third and I thought if we could just keep in touch with those guys and keep close to them, then we might be able to out pit road them at the end of the race, and we did one of them but not the other one.

“Overall a good day and the Snickers Camry was fast and was the best we’ve run here in a long, long time, so that was fun. It was nice to lead some laps, be up front like that, but I hate it that we got behind on pit road and then we couldn’t make it up on the track. That kind of sucks.”

Busch’s performance did lock up the regular season championship for him, which gives him 15 additional playoff points.

Despite the start being delayed by four hours due to rain, it was a competitive race all night, with back and forth racing throughout the top 15.

But the fabled “Lady In Black” did reach out and shatter some expectations for several drivers.

The biggest moment on the night came on lap 275, when a cut tire for Daniel Hemric triggered a multi-car crash in turn four that gathered up several top five contenders, including Denny Hamlin, Kurt Busch, pole sitter William Byron and Jimmie Johnson.

Kurt Busch had won the first segment of the race, while Hamlin was contending in the top five when the crash happened. But the biggest hit may have come for Johnson, who was running in fourth place and appeared to be en route to a much needed strong points night.

But that went away with a 16th place finish for Johnson, who remains 18 points outside the bubble for the Playoffs with the cutoff race looming next weekend at Indianapolis Motor Speedway.

“Yeah, I mean we are running out of days and if we miss it, it’s just going to be by a few I believe,” Johnson said. “If I look back over the first half of the season, I see a lot of races where we gave away a few points. So, it’s kind of unfair to put all the pressure on one race in Indy. But it is what it is and we are going to go there to win a race. I felt like we could have been a top 3 or 4 car and really help ourselves, but it is what it is. At least my car looked cool. I’m very happy to have that throwback, with Ally, Chevrolet and all the support from my family and friends. We’ll go to Indy and see what happens.”