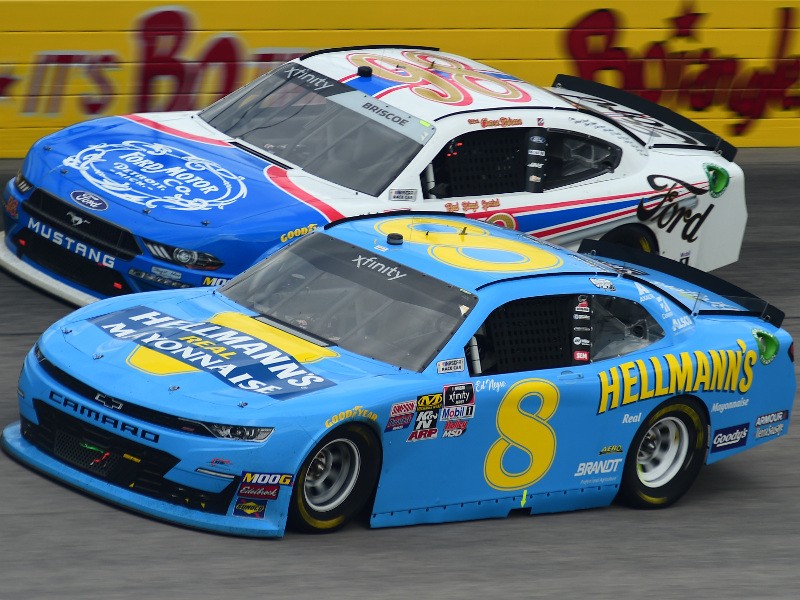 DARLINGTON, S.C. - Dale Earnhardt, Jr. has always had an eye for talent.

After all, Earnhardt helped launched Brad Keselowski’s career by putting him in one of his NASCAR Xfinity Series cars. The same goes for Chase Elliott.

But on Saturday afternoon at Darlington Raceway, Earnhardt got a closer-than-usual look at the level of talent in the Xfinity Series and came away impressed. Competing in the Sport Clips Haircuts VFW 200 at the 1.366-mile track — in his only start of the year — Earnhardt took particular note of the drivers who raced him side-by-side.

“I got to race with Brandon Jones a little bit, had a lot of fun racing him,” Earnhardt said after scoring a fifth-place finish. “Got to run with a few guys. Everybody out there really impressed me.”

In fact, that was the main takeaway for Earnhardt, who swapped positions with six-time Xfinity winner Christopher Bell on several occasions during the race.

“The Xfinity Series has kind of always been the little brother to the Cup Series, but these cars are so challenging,” Earnhardt said. “Big respect to these guys that do it every single week. Even those cars that we’re lapping, I know those damn cars aren’t driving good. Those guys have their hands full, so big respect to everybody in this field from the front to the back.”

Earnhardt also got a chance to feel out his own JR Motorsports equipment, which hasn’t been performing to its usual consistently high standards this season.

“If I had to guess what our issue is, it’s front aero, getting a little more downforce on the front half of the car,” Earnhardt said. “We couldn’t get our car to turn the way we needed to, and we had to unhook the back to do that, and that’s not what you want to be doing.

“So If I had to guess right now, I’d say we have to get the front of the car to work better aerodynamically.”

As much as he enjoyed the experience, Earnhardt said that Saturday’s 200 miles around Darlington will probably be his last, preferring to try his hand at Homestead-Miami Speedway next year.

“This place is too tough — the kids can have it,” Earnhardt said.

Alex Bowman Had To Get Into Character To Play Tim Richmond

But from the first time he saw video of Richmond, who passed away in 1989 — nearly four years before Bowman was born — Bowman found Richmond’s racing style and joie de vivre compelling.

For throwback weekend at Darlington Raceway, Bowman got his wish — to drive his No. 88 Hendrick Motorsports Chevrolet with a paint scheme inspired by the No. 25 Folger’s car Richmond made famous — a deep candy-apple red with gold numerals.

Bowman played the part to the hilt with regular social media releases, sporting a long-haired wig and bushy moustache.

“It’s been fun, for sure,” Bowman said. “I think I’m pretty shy and keep to myself at times, so I had to get into character a little bit there during that photo shoot. It’s been fun to do. We have one picture per day for the whole week, so that’s been neat. It’s been a lot of fun.

“When I have the wig, moustache, aviators and Tim Richmond fire suit, I’m just not me anymore. I guess in character would be the best way to say that. It took me a minute for sure during the photo shoot. I was like ‘Man, this is awkward,’ but it was pretty cool.”