Denny Hamlin comfortable with role as a Playoff favorite 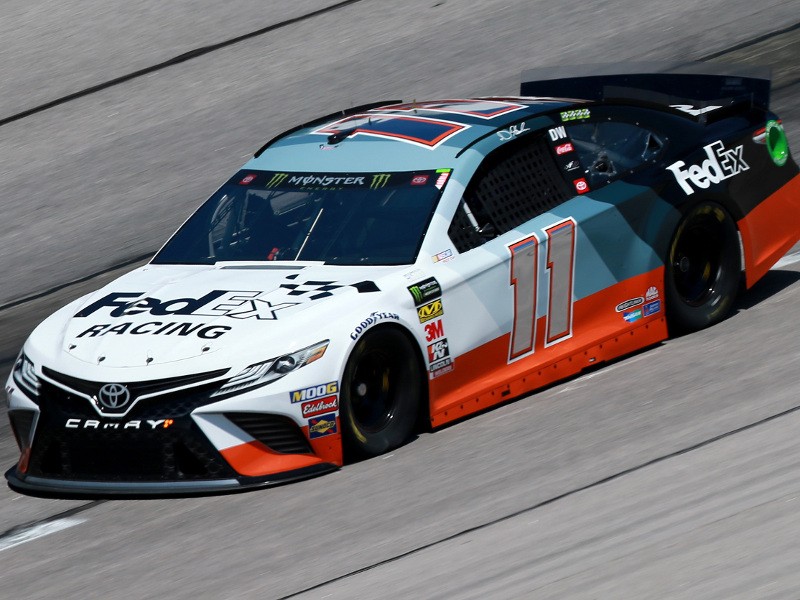 DARLINGTON, S.C. – If you tout Denny Hamlin as a favorite to win the Monster Energy NASCAR Cup Series championship this season, don’t expect the driver of the No. 11 Joe Gibbs racing Toyota to contradict you.

“We certainly have a great shot,” Hamlin said on Saturday at Darlington Raceway, site of Sunday’s Bojangles’ Southern 500. “I like our chances each and every weekend against anyone.”

Recent results back up that assertion. Hamlin picked up his fourth victory of the season August 17 at Bristol Motor Speedway, where he passed Matt DiBenedetto with 11 laps left and pulled away for the win. Hamlin has accumulated 23 Playoff points so far, tied for second in the series with Joe Gibbs racing teammate Martin Truex, Jr. and six behind leader Kyle Busch, another teammate.

“We won’t have as many points at Kyle, unless we win the next two races, but we’ll be close,” Hamlin said. “Certainly, closer than we’ve ever been as far as Playoff points are concerned. That’s obviously very crucial to get you past those first couple rounds, if you have a bad race.”

Hamlin hasn’t had many bad races recently. He’s riding a string of six straight top-five finishes that includes victories at Pocono and Bristol. Consequently, winning the next two events isn’t that far-fetched, especially considering his record at Darlington, where Hamlin has two Cup victories and an average finishing position of 6.2 — not to mention five wins and nine top fives in 11 NASCAR Xfinity starts.

“I want to win as many races I can, especially after not winning any last year,” Hamlin said. “We want to take advantage of every single opportunity we can to win, and certainly over the last eight weeks, when you look at what we consider our best finishing-position potential, it’s all been a string of ‘1s’. I think certainly we want to capitalize on every single one.”

Missing First Postseason Might Be A Blessing For Jimmie Johnson

Sure, Jimmie Johnson wants to qualify for the Monster Energy NASCAR Cup Series Playoffs this year.

And, certainly, he’d like to keep intact his unique streak of advancing to the NASCAR postseason every year there has been a postseason.

Realistically, though, the seven-time series champion faces an uphill battle if he hopes to race for the title this year. In the throes of an 83-race winless streak, Johnson is 18th in the standings, 26 points behind Daniel Suarez in 16th and 24 behind Clint Bowyer in 17th.

Johnson would have to pass both drivers in the next two races to claim the 16th and final Playoff spot, provided there are no new winners among those behind him in the standings. That’s a tall order.

Should Johnson’s enviable Playoff streak end, however, there might be a silver lining. He and new crew chief Cliff Daniels would have 10 races to work on improvements for 2020, the final year of Johnson’s current contract with Hendrick Motorsports.

“It’s really about building this team and getting it right for the next year — for the 2020 season and getting back to Victory Lane,” Johnson said. “The goals kind of stay the same, but we all know the pressure is looming on us heavily right now to make the Playoffs. If that pressure does go away, then I think we will be able to speed up the learning process amongst each other.

“I hope it doesn’t go away, because that means we made the Playoffs and have to stay alive in the Playoffs. We’d much rather have this pressure and keep evolving as a team than have it go away.”

Clearly, keeping the Playoff streak alive is the preferable of the two possible outcomes. To that end, the driver of the No. 48 Chevrolet hopes to make the next two races memorable.

“It’s a story,” Johnson said. “I get it. Believe me, I want to keep my Playoff streak alive, and I want to be a factor in the Playoffs. I want to know what the outcome is, but it’s not that I want to hurry up and get through it and have it go away. I want to race. I want to get out there and earn another victory and earn my way into these Playoffs.

“That’s what we’re all here for. So, my optimism again, comes from that I just know where this team is right now, and I know where it’s going. Unfortunately, we don’t have any more time left, but we’re going to finish up the year strong and that brings me a lot of excitement regardless of how the Playoffs unfold.”

Newman Has No Regrets About Bristol Battle With DiBenedetto

DiBenedetto struggled to overtake Newman, generally regarded as one of the toughest drivers in the series to pass. Contact between the two vehicles tightened the handling of DiBenedetto’s No. 95 Toyota, whose lead had shrunk to .8 seconds by the time he cleared Newman’s Mustang.

With 11 laps left, Hamlin caught and passed DiBenedetto for the win, spoiling a Cinderella story for the driver who had been told by Leavine Family Racing earlier in the week that his option wouldn’t be picked up for 2020.

As might be expected, Newman received his share of criticism on social media, even though he was locked in close battle for a Playoff spot and was fighting to stay on the lead lap.

“I think Kyle Busch would tell you the best, there’s always going to be haters,” Newman said on Friday at Darlington Raceway. “I did what I needed to do to be competitive. I haven’t seen any replays. I don’t know exactly how he hit me twice in two separate straightaways in the right rear going down the straightaway.

“If I pinched him, or if he didn’t give himself enough room or what, but in the end there was nothing intentional by me. Fans can choose whatever they want — I mean there are thousands of fans that have come to Bristol to see crashes for years, so I’m sorry I let them down.”

Asked whether he felt a need to talk to DiBenedetto about the incident, Newman demurred.

WDUN will carry live MRN Radio coverage of tonight's 70th annual Southern 500 for the Monster Energy NASCAR Cup Series from Darlington Raceway beginning at 5 pm on 102.9 FM, AM 550 and streaming live on AccessWDUN.