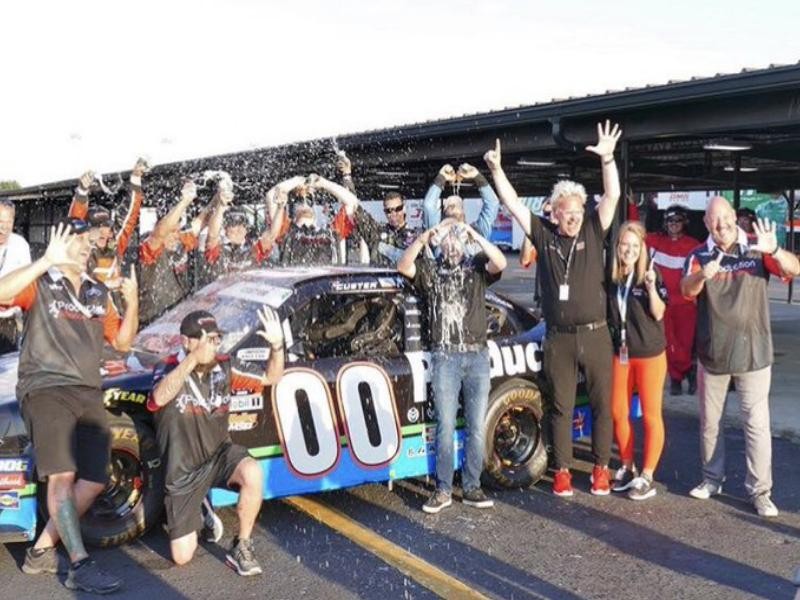 DARLINGTON, S.C. - There’s a popular expression familiar to every Saturday-night short track racer in the country: The race ain’t over until you go through the tech shed.

As a former short-track racer himself, Denny Hamlin has heard it before, and he heard it again on Saturday night as he found himself going from worst to first to worst again after a disqualification following his win in the Sport Clips Haircuts VFW 200 at Darlington Raceway – handing the victory to second-place finisher Cole Custer.

It was a turn of events that wiped out what had been a remarkable victory for Hamlin, who had to come from the back of the pack after starting in a back-up car and then held off a determined charge from Custer in the last 10 laps of the race to take the checkered flag.

But it was not to be.

Hamlin’s No. 18 Sports Clips Toyota was disqualified in post-race inspection for a ride-height violation that relegated Hamlin to a 38th-place finish – one position lower than where he started. Hamlin’s car was among six cars that underwent post-race inspection, and was the only one that failed, according to Xfinity Series director Wayne Auton.

Custer had already changed into street clothes and was hangout out at his team’s hauler when he was told he was the winner.

“It’s a really strange feeling, honestly — obviously,” Custer said. “You don’t want that way, but it is what it is. We all play by the same rules. Was that the deciding factor? No.

The victory was the sixth of the season for Custer – tying him with Christopher Bell with the most victories this season.

Custer had dogged Hamlin following a late restart with 10 laps to go and at one point managed to get the nose of his No. 00 Ford Mustang under Hamlin but couldn’t pull off the pass.

“I thought I had him,” Custer said after the race. “I really wanted it — finishing second here really sucks. You really want to win at one of the marquee places… I couldn’t get a run off of (turn) 4. I don’t know — it was so close.”

Hamlin had already accepted the winner’s trophy and had completed his post-race media appearances when the announcement was made.

After learning of his disqualification, Hamlin vented his frustration on Twitter, saying “(The) car was a handling mess and had to put a boatload of rounds in the RR (right rear) to help it. This is the result. Nice job @ColeCuster.”

Hamlin’s disqualification marked the second time a Joe Gibbs Racing entry had failed post-race inspection after Bell’s car was DQ’d after finishing third at Chicagoland Speedway back in June.

NASCAR Had just implemented the disqualification policy this season, and so far two event winners had their victories taken away – Ross Chastain at Iowa back in June and now Hamlin.

Hamlin had started from the rear of the field after smacking the wall with his primary in Friday’s practice session, putting him in a back-up car to start Saturday’s race.

After fighting an ill-handling race car for the first half of the 147-lap race, Hamlin started making up ground in the final stage as his crew continued to adjust on the car.

With 27 laps to go, Hamlin powered past pole-sitter Ryan Blaney on the law side coming into turn one and started to pull away, leading Blaney by half a second before the caution flew with 13 laps to go for a spin involving Josh Williams.

The lead lap cars came to pit road under the ensuing caution, with Hamlin winning the race out of the pits followed by Custer and Blaney.

Hamlin got a good jump on the restart while Custer cleared Blaney and started chasing the race leader, trying the low side while Hamlin stayed up high.

With three laps to go, Custer had pulled within a car length of Hamlin and continued to try to gain ground on the low side, but Hamlin’s Toyota had better straightaway speed and was able to fend off Custer, who trailed Hamlin to the finish by a car length.

Tyler Reddick was credited with second, followed by Blaney and Bell.