Xfinity Series set for twists and turns at Road America 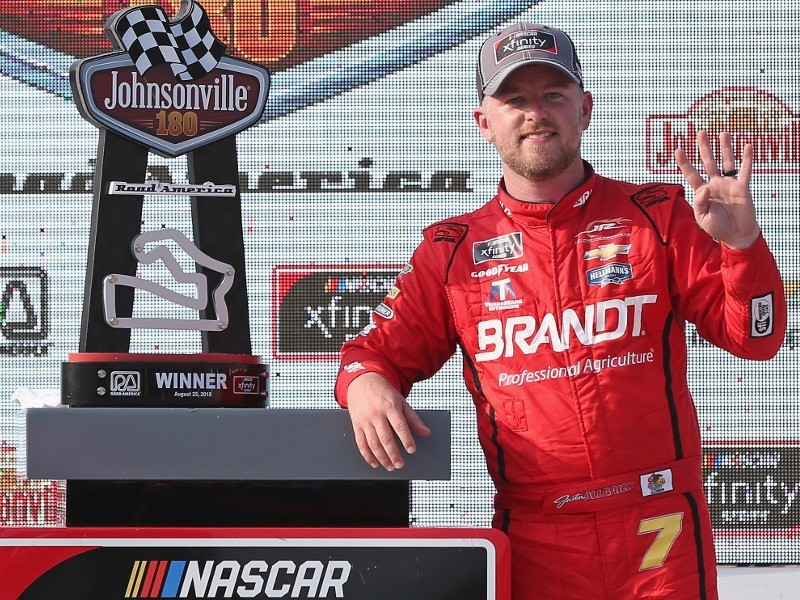 With four races to go in the regular season, time is running out for NASCAR Xfinity Series championship contenders.

With Playoff implications on the line, expect the competition to be tight and the action to be drama-filled this weekend as the series heads to Road America in Elkhart Lake, Wisconsin for the 10th annual CTECH Manufacturing 180 on Saturday, August 24.

Road America has seen nine different Xfinity Series winner’s pull into Victory Lane in as many races and this weekend we could see a 10th different winner – which would tie Michigan International Speedway for the longest active different winners streak in the series at 10 each. Only three former Xfinity Series Road America winners are entered this weekend – A.J. Allmendinger (2013 winner), Jeremy Clements (2017) and last season’s winner Justin Allgaier. Both Allgaier and Clements are vying for Playoffs spots this season and are still looking for their first win of the year.

But the obvious road course ace to watch this weekend has to be Team Penske’s Austin Cindric, who won the first two of the four road courses the Xfinity Series visits this season (Watkins Glen, Mid-Ohio), and now has the opportunity to become the first driver in series history to win at three different road courses in a single season.

Cindric will have his work cut out for him though, as the Xfinity Series’ “Big 3” – Tyler Reddick, Christopher Bell, and Cole Custer – have taken the 2019 season by storm, winning 14 of the first 22 races of the year – a winning percentage of 63.6%.

Looking ahead this weekend to Road America, Stewart-Haas Racing’s Cole Custer has had the most success among the Big 3 on the four-mile course putting up one top five and two top 10s in two starts; including a best finish of fourth in this race last season. However, Richard Childress Racing’s Tyler Reddick and Joe Gibbs Racing’s Christopher Bell haven’t had the same luck as Custer at Road America. Bell has made two series starts at the venue posting an average finish of 21.0 and Reddick made his series track debut at Road America last season, starting 29th and finishing 34th. A lot has changed since 2018, as Reddick and Bell both finished inside the top-five at Watkins Glen and Mid-Ohio earlier this year.

With the opening race of the 2019 NASCAR Gander Outdoors Truck Series Playoffs behind them, the eight drivers contending for the title head to the lone road course on the series schedule this weekend for the seventh annual Chevrolet Silverado 250 at Canadian Tire Motorsport Park on Sunday, August 25.

Brett Moffitt is sitting pretty as the Gander Trucks head north of the border – he opened the postseason with a win at Bristol Motor Speedway and has locked in his spot in the second round of the Playoffs. But after that, it’s a big unknown for the Playoff contenders.

The trio of ThorSport Racing teammates in the Playoffs (Grant Enfinger, Matt Crafton and Johnny Sauter), along with the fourth driver in their stable, Ben Rhodes, took a unique approach to preparing for the 2.459-miles of twists and turns in Bowmanville, Ontario. They paired up (Rhodes and Enfinger in one entry, Crafton and Sauter in another) and entered the IMSA Michelin Pilot Challenge race in Ford Mustang GT4s with Multimatic Motorsports in early July.

But no matter who comes out on top this Saturday, it’s guaranteed that a new winner will be pulling into Victory Lane – and it will be the seventh consecutive different winner in the Chevrolet Silverado 250. Current Monster Energy NASCAR Cup Series standout Chase Elliott won the inaugural event in 2013, and was followed by Ryan Blaney, Erik Jones, John Hunter Nemechek, Austin Cindric and Justin Haley during the 2014-2018 versions of the race. All of those drivers have also moved on to either the NASCAR Xfinity Series or Monster Energy Series competition.

NASCAR Xfinity Series
Next Race: CTECH Manufacturing 180
The Place: Road America – Elkhart Lake, WI
The Date: Saturday, August 24
The Time: 3 p.m. ET
TV: NBCSN, 2:30 p.m. ET
Radio: MRN, SiriusXM NASCAR Radio
Distance: 182.16 miles (45 Laps); Stage 1 (Ends on Lap 10),
Stage 2 (Ends on Lap 20), Final Stage (Ends on Lap 45)
2018 Winner: Justin Allgaier
What to Watch For: There are three former race winners in this weekend’s field – Justin Allgaier (2018), Jeremy Clements (2017) and A.J. Allmendinger (2013). … Austin Cindric has won the previous two road course races of 2019 – at Watkins Glen and Mid-Ohio. … Regan Smith, Allmendinger and last week’s Bristol, Tenn. Monster Energy Series race runner-up Matt DiBenedetto are entered this weekend. … Jeremy Clements 5.802-second victory over Michael Annett in 2017 is the largest margin of victory. … Michael McDowell’s 0.534-second win over Brendan Gaughan is the smallest Margin of Victory. …Carl Edwards led the most laps (35 of 45) en route to victory in the 2010 inaugural race. … Reed Sorenson led the fewest laps en route to a win – one lap – in his 2011 victory over road racing ace Ron Fellows. … The deepest in the field a winner has started is 24th – Jeremy Clements in 2017. … The pole position is the most prolific starting spot on the grid producing three winners – three in the first four NASCAR races held at the track. A.J. Allmendinger is the last pole winner to win the race (2013). … The most lead changes in a race is 12 (2011). … There have been no repeat winners in the race’s nine-year history. … Justin Allgaier, Michael McDowell and Brendan Gaughan have the most first and second-place finishes – a victory and runner-up each. … Cole Custer has earned the most pole positions (eight) on the 2019 season. … Drive for Diversity graduate Ryan Vargas will be driving the No. 4 JD Motorsports car making his second national series start. He started 23rd and finished 17th in his debut at Iowa earlier this season.

NASCAR Gander Outdoors Truck Series
Next Race: Chevrolet Silverado 250
The Place: Canadian Tire Motorsport Park – Bowmanville, ON
The Date: Sunday, August 25
The Time: 2:30 p.m. ET
TV: FS1, 2 p.m. ET
Radio: MRN, SiriusXM NASCAR Radio
Distance: 157.37 miles (64 Laps); Stage 1 (Ends on Lap 20),
Stage 2 (Ends on Lap 40), Final Stage (Ends on Lap 64)
2018 Winner: Justin Haley
What to Watch For: This race is the second NASCAR Gander Outdoors Truck Series Playoff event of the season. Defending series champion Brett Moffitt won the first Playoff race last week at Bristol, Tenn. … There have been six different winners in the series’ six-race Canadian Tire Motorsport Park history. … Austin Cindric is the only driver to win from pole position (2017). … Ryan Blaney – 2014 – won from 14th starting position – the farthest on the grid to produce a winner. … The 2015 race won by Erik Jones produced the most lead changes (14). … Only twice in the six races has the driver who led the most laps won the race – Cindric led 32 laps in his 2017 win and Ryan Blaney led 34 laps in his 2014 win. … NASCAR Monster Energy NASCAR Cup Series’ Most Popular Driver Chase Elliott scored his first career NASCAR national series win in this inaugural race in 2013. He edged Ohio driver Chad Hackenbracht in a race that ended under caution. … The closest Margin of Victory is .034-seconds when John Hunter Nemechek dueled Cole Custer to the finish line in a thrilling 2016 finale. … The largest Margin of Victory is Cindric’s 3.481-second win over Noah Gragson in 2017. … No 2019 series regular has won this race previously. … This will be the track debut for Playoff contender Tyler Ankrum. … Among the Playoff eight drivers, Matt Crafton and Johnny Sauter are the only two drivers who have started every race at Canadian Tire Motorsports Park. … Crafton’s runner-up finish in 2015 is the best effort at the track among the Playoff drivers.