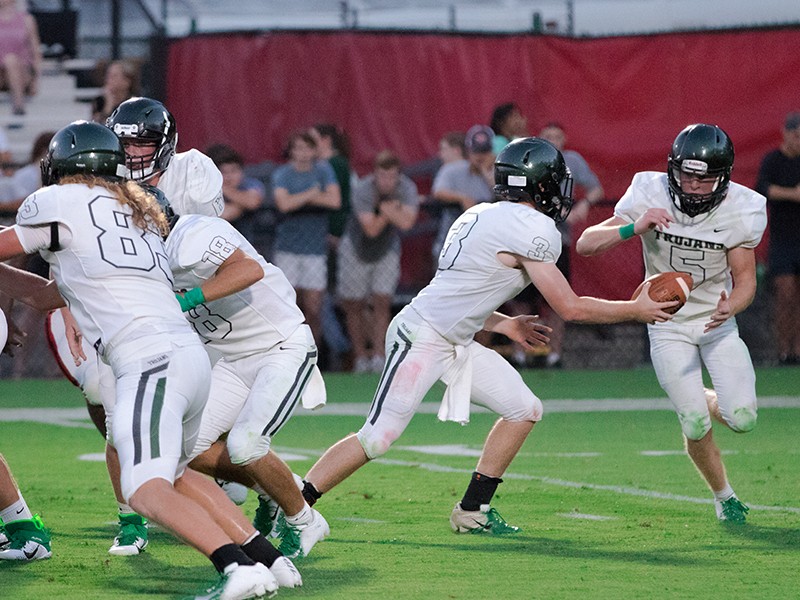 North Hall's JT Fair is expected to be a key player on the Trojans' offense.
Photo/Seth Chapman
Contact Editor

GAINESVILLE — Although this game is dubbed as a rivalry, the overall record proves otherwise.

North Hall leads the overall series against Chestatee 15-2. So, in terms of record, it's not a typical rival game.

Nevertheless, the players and fans on each side would say different.

The two schools are located seven miles from each other or a 12-minute drive. If you want to get some exercise in, it'll take you two hours and 25 minutes to walk from Mt Vernon to Sardis.

The close proximity and relationships outside of school between the players and fans are the main reasons the annual edition of the Battle of Highway 60, set for 7:30 p.m. at Chestatee and can be heard live on FM 102.9 WDUN, is considered such a rivalry.

"They are our bitter rival; we're almost across the street from them," Chestatee QB Christian Charles said. "That fire is in me. We want to go get them."

Regardless of the rival talk on both sides, Charles knows they have to execute and eliminate the big play to beat the Trojans.

"We have to be really good everywhere," he said. "They're really consistent. On our side of the ball, we have to take what they give and not force anything."

On the other side, North Hall senior running back JT Fair said he's expecting Chestatee "to put up a pretty good fight."

"I think they're much better than they were last year," he said. "Their quarterback, Christian Charles, is a junior now and is more experienced. We're going to have to play good defense, and if our offensive line blocks well, I think we'll score a pretty good bit of points."

In that game, Chestatee turned the ball over four times and gave up four scoring plays for 42 yards or more and a 90-yard kickoff return to open the second half.

"Not to do that, first and foremost," Chestatee coach Shaun Conley said about last year. "We can't turn the ball over. North Hall is a very well-coached team and doesn't make many mistakes, so we have to match that. Some of those guys we talked about have to make the dynamic plays for us to be able to win the game and we expect that."

The War Eagles return 16 starters, eight on defense and eight on offense, and are full of senior leadership.

The offense, led by Charles, who finished the season with more than 3,000 yards of total offense and senior wideout Seth Pressley, who hauled in 1,189 yards last season, has proved they can put up big numbers.

On defense, they'll be focused on stopping the Trojans' Wing-T attack, an offense very few teams could stop in 2018. Chestatee ranked last in Class 4A in points allowed but are now in the second year of the 4-2 base defense.

"They played really well last week," Conley said about the defense. "Last year, it was a matter of making sure people were lined up correctly and those type things, and now we're past that. We've been able to eliminate those issues, now, it's just getting them playing hard and getting after it. They're doing that right now, too."

As for North Hall, they also return a ton of talent from last year's second-round playoff team but did lose quarterback David Seavey and running back Daniel Jackson to graduation, both names were all over the stat book in last year's game. But North Hall returns Fair at running back as well as Jacob Dickey, and Trey Sanders will take over the quarterback position. Cody Smith will step in for an injured Clark Howell at tailback. They also return what could be one of the area’s best front-7 behind senior linemen Austin Sullens, Micah Holman and Seth Carlton.

"Watching Jacob Dickey with his blocking, his fakes and watching him do the things we ask him to do, he's going to come out and play well for us on offense," North Hall coach David Bishop said. "Luke Volle will be moved around and try to do some things with him and try to get him the ball at wide receiver. If we execute and take care of the little things, I feel like we'll be OK."

Defensive coordinator Stuart Cunningham's defense was stingy last season, giving up an average of 15.6 points per game. They return eight starters, including most of the front six. Fair, Volle and Dickey are back in the secondary, a trio that combined for six interceptions last season.

As for the keys to a Trojan victory, Bishop says taking care of the little things and executing the basics are the main ingredients to success against the War Eagles.

"Just like against Gainesville, I preached all week to try and stay even keel and don't let your emotions take control because when you do, you get tired faster," Bishop said. "I do know that coach (Shaun Conley) does a great job, and they have some pretty talented kids on the offensive side of the ball. I know they're in the second year in what they do defensively, so I'm sure they're going to be much improved. The numbers last year, there was a lot of different turnovers and special team things that went in our favor and not in theirs. So, I'll try not to get caught up in those numbers and try to keep our kids from being caught up in the rival and just come out an execute the basics and focus on our assignments on both sides of the ball. I feel good about where we are if we'll do that."