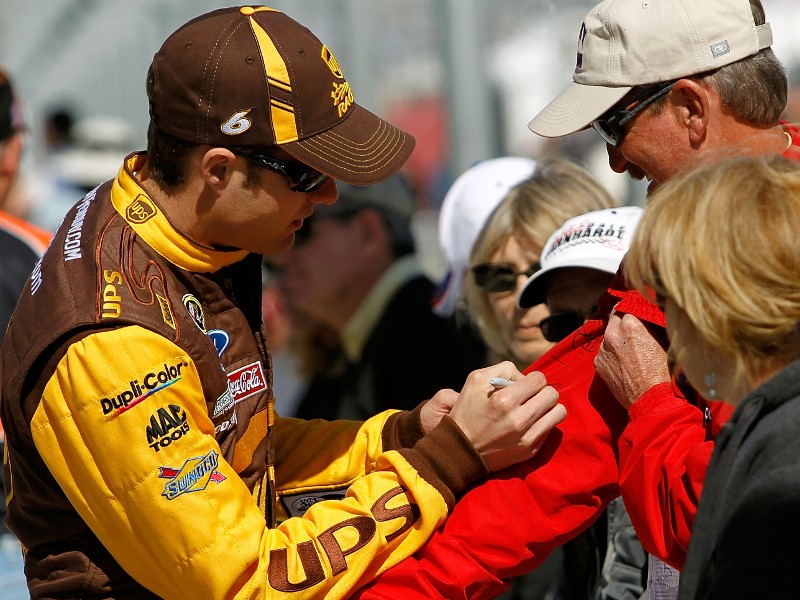 BRISTOL Tenn. - On the first attempt at an overtime finish in the 2011 Daytona 500, David Ragan’s life changed.

Given eight years of perspective, and a recent decision to alter the course of his life once again, Ragan now can joke about the fateful restart, but he still reflects on what might have been, had the finish of that race gone according to plan.

Ragan, who announced his impending retirement from full-time racing on Wednesday, knew when he got behind the wheel of the No. 6 Roush Fenway Racing Ford for Daytona Speedweeks in 2011 that he was racing for his job.

Rumors that sponsor UPS might be leaving the team at the end of the season had already surfaced. But when the Great American Race went to overtime, Ragan was in control, poised to take home the Harley J. Earl trophy and salvage his career.

Ragan led the field to green to start lap 203, but moments before he reached the start/finish line, he steered his car from the top lane down in front of the No. 21 Wood Brothers Ford of Trevor Bayne on the bottom. NASCAR black-flagged Ragan for changing lanes before the stripe, handing the lead to Bayne, but before the lap was over, A.J. Allmendinger turned Ryan Newman into the outside wall on the backstretch.

Newman’s car bounced off the barrier, slid across the track and collected the cars of Martin Truex, Jr. and Dale Earnhardt, Jr. Bayne held the lead for a second overtime restart and stayed out front the rest of the way, winning the Daytona 500 in his second Monster Energy NASCAR Cup Series start, the day after his 20th birthday.

Bayne never won again in the top series, but the victory in NASCAR’s most prestigious race sustained a career that lasted eight years, first with the Wood Brothers and later with Roush Fenway.

Though Ragan returned to Daytona in July and won the Coke Zero 400, the die was already cast. At the end of the season, he lost his sponsor and lost his ride.

“I think about it a lot,” Ragan said on Friday in advance of Saturday’s Bristol Night Race at Bristol Motor Speedway after discussing his decision to retire from full-time racing and spend more quality time with his wife Jacquelyn and two daughters. “I have become friends with Trevor, and I think that there’s no one that would have filled that role that I would have wanted to win that race more than Trevor, but, yeah, I do think about it.

“It made me sad for a little while, and you thought about ‘what ifs?’ and now I can laugh about it and joke about it, and that’ll be a fun story to tell. But that’s real. That was a close encounter for who knows what would have changed in my career. But I’m happy everything worked out the way it did, and you learn from those moments of defeat, and that was certainly a teachable moment.”

Ragan signed on with Front Row Motorsports and claimed his second career victory at Talladega in 2013. He competed for Michael Waltrip Racing and BK Racing in 2015 and 2016, respectively, before returning to Front Row in 2017.

But Ragan still rues the day he lost his job with Roush Fenway.

“Leaving Roush Racing was an incredibly sad time for me,” he acknowledged. “Leaving a great team that we’d just won a race. Drew Blickensderfer was my crew chief, and we had a pretty good year, and it felt like the tide had turned. I’d matured and gotten a little smarter. Our race cars were getting better. So that was a difficult time.”

Ultimately, though, he found solace and joy in his new surroundings.

“I went to Front Row, which was just a part-time team — a couple of different drivers revolving through that driving seat,” Ragan said. “I didn’t know what the future looked like, but that was one of the biggest blessings of my life. I got to meet some really good friends, lifelong friends.

“My wife is great friends with David Gilliland’s wife and Michael McDowell’s wife and some of the other family members that are around. It’s amazing how things like that just happen sometimes. When you felt like your back was against the wall and you were going in a bad direction, it turned out to be one of the best directions in my life.”

Officials with the National Transportation Safety Board have been looking at surveillance video of the Thursday crash of the Cessna Citation Latitude jet carrying Dale Earnhardt, Jr., his wife Amy, daughter Isla and two pilots, and though specific causes of the accident won’t be cited for weeks, NTSB investigator Ralph Hicks gave an empirical description.

The plane rolled past the end of the 4,500-foot runway (which Hicks said was adequate to land the plane) crashed through a fence, came to rest near the shoulder of Highway 91 in Elizabethton, Tennessee, and bust into flames.

Earnhardt, his family and the two pilots escaped the wreck and were taken to a local hospital and later released.

Kelly Earnhardt Miller, Earnhardt’s sister and general manager of JR Motorsports, had issued an update before the NTSB press conference.

“We want to reiterate our appreciation to the NASCAR community, first responders, medical staff, and race fans everywhere for the overwhelming support in the last 24 hours,” Earmhardt Miller said. “Dale, Amy, Isla and our two pilots are doing well.

“We are assisting the Federal Aviation Administration and the National Transportation Safety Board in the investigation and will have no further comment at this time.”

With Matt Tifft under the weather for final Monster Energy Cup Series practice, Chase Briscoe took over the No. 36 Front Row Motorsports Ford for the session.

In his first stint in a Cup car at Bristol Motor Speedway, Briscoe posted the 33rd fastest lap among 37 drivers.

“Speed-wise, it didn’t feel much different,” Briscoe said, comparing the Cup car to his usual NASCAR Xfinity Series ride. “I think it would have been harder in past years, for sure. But this (Cup) package, I feel, relates quite a bit to the trucks and Xfinity cars. It wasn’t a huge adjustment as far as how the car drove. It was just different how I sit in the car, obviously, after putting my adjustment in, in those first couple of laps.

“I sit so high in this car compared to what I’m used to, I couldn’t even see the exit of the corners. I had to try and lean down as much as I could to see. Little things like that were probably the biggest difference, but as far as how the car drives, they were pretty similar. At a place other than Bristol, maybe you’d feel it a little bit.”

Tifft visited the infield care center after opening practice and was to be reevaluated before Cup qualifying on Friday afternoon, leaving open the possibility that Briscoe could qualify the car and perhaps even race it in Saturday night’s Bass Pro Shops NRA Night Race at the .533-mile high-banked short track.

As it turned out, Tifft was cleared medically and back in the car for Friday afternoon’s qualifying session, letting Briscoe off the hook from a double-duty weekend.

“I don’t think I’m mentally prepared to run 500 laps, if I have to do it,” said Briscoe, who subsequently qualified sixth for Friday night’s Food City 300 NASCAR Xfinity Series race. “Three hundred laps is a long time, let alone 500….

“It’s pretty cool. I never thought in a million years I’d ever get to drive a Cup car, an Xfinity car or even a Truck. It’s pretty neat that I got to do this today. That’s for sure.”