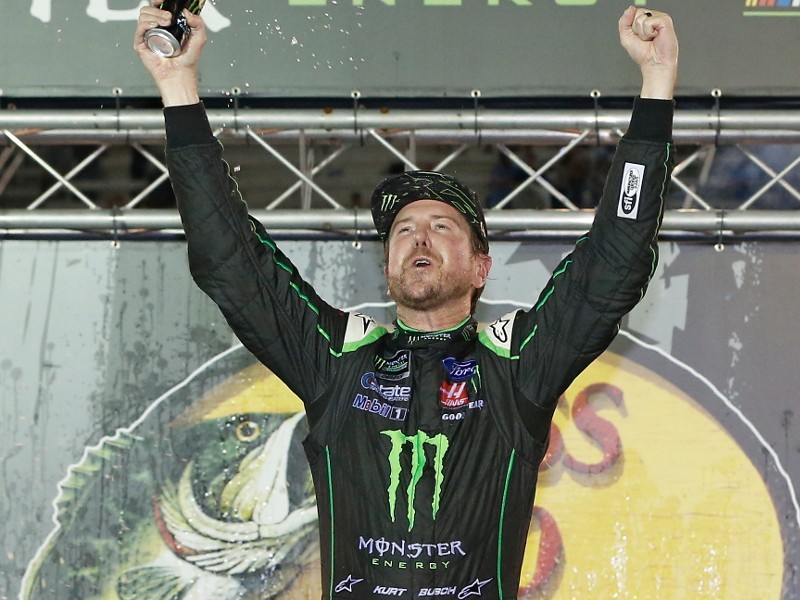 Tight-racing, hot tempers and amazing finishes typically characterize the annual Bristol Motor Speedway night race and with Playoff hopes on the line as the regular season nears its conclusion, it’s easy to expect all that high drama in Saturday night’s Bristol Night Race.

The last four Bristol races have a been Busch Brothers Battle – with current Monster Energy NASCAR Cup Series points leader Kyle Busch winning three of them, including the sport’s first season visit this April. His older brother Kurt Busch returns to the track as defending winner of this late summer night race.

Kyle Busch, of Joe Gibbs Racing, and Team Penske driver Joey Logano have been vying for the regular season championship all year. Busch takes a 20-point lead into Bristol.

And while that’s a compelling battle atop the standings, there is also an intense competition at the Playoff cutoff line. Four drivers – Ryan Newman, Clint Bowyer, Daniel Suarez and Jimmie Johnson – are separated by 22 points from Newman in 15th to Johnson in 18th.

Bristol should be an especially interesting race for these drivers, who coincidentally finished in consecutive order in April. Bowyer was seventh, Suarez was eighth and Newman and Johnson were ninth and 10th.

Johnson is the only one among the four with a series victory at Bristol – winning twice in 2010 and then 2017 – the last time a driver not named Busch celebrated in Victory Lane. His 21 top-10 finishes are most among active drivers.

Both Newman (2005) and Bowyer (2008) have visited Bristol Victory Lane in the NASCAR Xfinity Series. And Suarez scored his career-best Xfinity Series result at Bristol – runner-up in 2015 and 2017 Xfinity races at the track.

Of course, all you need to lead is the last one. And rest assured, these four drivers in particular, know that.

Five To Go For Xfinity Series

While the series “Big 3” – championship leader Tyler Reddick, Christopher Bell and Cole Custer – have accounted for 13 of 21 wins. It has been three races – the longest span on the season – since one of those drivers hoisted a trophy.

Chase Briscoe earned his career first series win at Iowa and Austin Cindric has won the two races since – road course events at Watkins Glen, N.Y. and the Mid-Ohio Sports Car Course. A win at Bristol would make the Team Penske driver Cindric only the ninth driver in series history to win three consecutive events. Bell is the last to do so, winning three straight last July.

Defending series champion Reddick has led the championship standings for the last 18 races, earning three wins but really maintaining the top position thanks to the Richard Childress Racing driver’s 18 top-10 finishes through the opening 21 events.

Joe Gibbs Racing driver Bell, a five race winner, is ranked second and Stewart-Haas Racing’s Custer – also, a five-time winner this season. Of the three top drivers, however, only Bell has won previously at Bristol – taking the checkered flag for the first time at the track this April.

Allgaier most likely shows up at Bristol the most motivated among those still looking for the first win of the season. The veteran and former Bristol winner (2010) led a race high 138 laps and won both stages of the April race before being collected in a late-race accident and suffering a 30th-place finish.

Monster Energy NASCAR Cup Series
Next Race: Bass Pro Shops NRA Night Race
The Place: Bristol Motor Speedway – Bristol, TN
The Date: Saturday, August 17
The Time: 7:30 p.m. ET
TV: NBCSN, 7 p.m. ET
Radio: PRN, SiriusXM NASCAR Radio
Distance: 266.5 miles (500 Laps); Stage 1 (Ends on Lap 125),
Stage 2 (Ends on Lap 250), Final Stage (Ends on Lap 500)
2018 Winner: Kyle Busch
What to Watch For: The last four races have been won by the Busch brothers. Kurt earned his sixth Bristol win in this race last year. His younger brother Kyle won his eighth Cup race at the track in April. … Jack Smith – with help from relief driver Johnny Allen – won the first Cup Series race at Bristol in July, 1961, … The first Bristol night race was held in 1978. … Richard Petty holds the record for most Bristol starts (60). Kevin Harvick and Kurt Busch have the most (37) among active drivers. … Darrell Waltrip holds the record for victories (12) at Bristol and that includes an unmatched streak of eight consecutive wins. … Kyle Busch leads all active drivers with eight wins. … Mark Martin and Cale Yarborough have tied for most pole positions (9). Denny Hamlin and Ryan Newman have the most (3) among active drivers. … Mark Martin won a record four consecutive poles. …Joey Logano (2010) and Erik Jones (2017) won their first career Cup pole positions at Bristol. …Chevrolet leads manufacturers with 39 pole positions. Ford is next with 36. …Three active drivers have won consecutive races – Kyle Busch, Kurt Busch and Brad Keselowski. … Kyle Busch is the youngest winner in track history – earning his first Bristol win in March, 2007 at the age of 21 years, 10 months, 23 days. … The late seven-time Cup champion Dale Earnhardt is the oldest Bristol winner – winning the 1999 August night race at 48 years, three months. … Cale Yarborough holds the record for most career laps led at Bristol (4,305 laps in 29 starts). Kyle Busch leads all active drivers with 2,304 laps led in 29 starts. …. Cale Yarborough holds the record for most laps led in a single race – 500 of 500 – when he won the March, 1973 race from pole position. …Five drivers earned their career first Cup victory at Bristol. Kurt Busch is the only active driver to do so (2002). …Bristol races have been won from the pole 25 times – the most of any starting position. … The deepest in the field a race winner has started is 38th – Elliott Sadler in 2001. …Richard Petty holds the record for most runner-up finishes (11). … Among active organizations, Team Penske and Joe Gibbs Racing are tied for most victories (12). Junior Johnson & Associates holds the all-time record at 16. …Chevrolet is the winningest manufacturer with 45 wins. Ford has 36 and Toyota has 11. … Among active drivers with at least 10 starts – Ricky Stenhouse Jr. boasts the best average finish (13.0) in 13 starts. Two-time race winner Jimmie Johnson is second best with a 13.114 average finish in 35 starts. ….The closest Margin of Victory at Bristol is .064-seconds when Kyle Busch edged Jeff Burton in March, 2007. … Mark Martin has been involved in four of the five closest races – winning one of those (1993 over Rusty Wallace) and finishing second in three of those (2009 to Kyle Busch, 1997 to Dale Jarrett and 1994 to Rusty Wallace).

NASCAR Xfinity Series
Next Race: Food City 300
The Place: Bristol Motor Speedway – Bristol, TN
The Date: Friday, August 16
The Time: 7:30 p.m. ET
TV: NBCSN, 7 p.m. ET
Radio: PRN, SiriusXM NASCAR Radio
Distance: 159.9 miles (300 Laps); Stage 1 (Ends on Lap 85),
Stage 2 (Ends on Lap 170), Final Stage (Ends on Lap 300)
2018 Winner: Kyle Larson
What to Watch For: Christopher Bell won the April Xfinity Series race at Bristol and is the only one among the championship three leading drivers – Tyler Redick, Bell and Cole Custer – with a victory at the track. … Kyle Busch is the all-time winningest driver in the race with nine victories. He won three straight in 2001-02 seasons and four straight, sweeping the 2014-15 seasons. … The winningest starting positions are the front row. The polesitter has won 11 races and the outside polesitter has won 11 races. … Kyle Busch is the most recent winner from the pole position – Aug., 2017. Three of his nine victories are from the first starting position, two are from the second position. … Twice Kyle Busch won three consecutive races. … Kyle Busch leads all active drivers in wins (9), top-five finishes (17), top-10 finishes (20) and laps led (2,067). …Phil Parsons won the first Xfinity Series race at Bristol in March, 1982 driving a Pontiac. … Chevrolet leads all manufacturers with 32 wins at Bristol. Toyota has 13 and Ford has nine. … Chevrolet drivers won a record 16 straight races between August, 1997-April, 2005. …Toyota has won six of the last eight races. … Kevin Harvick came from the farthest starting position on the grid – 38th – to win in 2005. … Only once in the last 18 races has a winner started farther back than the fourth row – Kyle Busch started 13th and won in 2013. …The most lead changes in a race are 16. It’s happened twice – in April, 2009 and August, 2011. … Joey Logano led all 300 laps to win the race in April, 2015. … The closest finish in the last 10 races happened in August, 2014 when Ryan Blaney beat Kyle Busch by .132-seconds. … The greatest Margin of Victory in the last 10 years is 1.181-seconds when Kyle Busch beat Daniel Suarez in August, 2017.